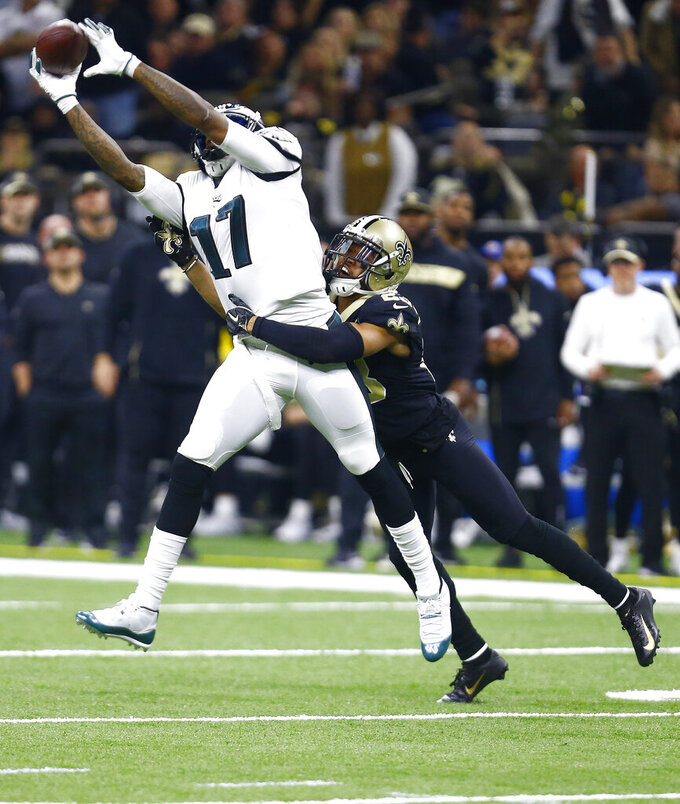 L.A. Rams vs. New Orleans, 3:05 p.m. EST. Jared Goff and the Rams (14-3) beat Dallas 30-22 to reach the NFC championship game for the first time in 17 years. The long-struggling Rams had won only one postseason game since their previous trip to the Super Bowl in February 2002. Drew Brees and the Saints (13-4) reached the NFC title game for the first time since 2009, when they won the Super Bowl, by defeating defending league champion Philadelphia 20-14.

New England at Kansas City, 6:40 p.m. EST. Tom Brady and the Patriots (12-5) are in the AFC title game for the eighth straight year after beating the Los Angeles Chargers 41-28 in the divisional round. New England will be looking to make its third straight Super Bowl appearance, and fourth in five years, with a win. Patrick Mahomes and the high-scoring Chiefs (13-4) will host the AFC title game for the first time in franchise history after beating Indianapolis 31-13. Kansas City has not been to the Super Bowl since January 1970.

— Tom Brady, Patriots, finished 34 of 44 for 343 yards and a touchdown as New England advanced to the AFC championship game for the eighth straight year with a 41-28 victory over the Los Angeles Chargers.

— Sony Michel, Patriots, ran for 129 yards and had three touchdowns to help lead New England past the Los Angeles Chargers 41-28.

— Alvin Kamara, Saints, had 71 yards rushing on 16 carries and added 35 yards on four catches in New Orleans' 20-14 win over Philadelphia.

— Albert McClellan, Patriots, recovered a fumbled punt return late in the second quarter to help set up a scoring drive for the Patriots in a 41-28 win over the Los Angeles Chargers.

— Marshon Lattimore, Saints, had two interceptions, including one to seal the win with 1:52 left as New Orleans topped Philadelphia 20-14.

— Adrian Clayborn and Dont'a Hightower, Patriots, each had a sack in New England's 41-28 victory over the Los Angeles Chargers.

With Kansas City, the Los Angeles Rams, New Orleans and New England winning, it marked the first time in NFL history that the league's top four scoring offenses made the conference championship games, according to STATS. ... New England earned its eighth straight trip to the AFC championship game with a 41-28 win over the Los Angeles Chargers, extending its NFL-record streak. With the Patriots playing next Sunday at Kansas City, they finished 9-0 at home this season. ... New England will make its 13th conference championship game appearance with coach Bill Belichick and quarterback Tom Brady. ... Brady improved to 8-0 as a starter against the Chargers' Philip Rivers, who dropped to 1-8 against New England all-time. ... Brady has a touchdown pass in 13 straight postseason games, tied for the third-longest streak since 1950. Only Brett Favre (20) and Brady himself (18 from 2001-11) have longer streaks. ... The Patriots are the second team in league history to score a touchdown on each of the first four drives of a playoff game, joining the 2000 Indianapolis Colts (in a first-round game against Denver). ... Philadelphia quarterback Nick Foles joined Pittsburgh QB Kordell Stewart and New York Jets running back Freeman McNeil as the only players in the Super Bowl era with at least one TD on a pass, catch and a run in their playoff careers.

All four teams with byes in the wild-card round — Kansas City, New England, New Orleans and the Los Angeles Rams — won their games in the divisional round. It's also the first time since 2015 — Denver, New England, Carolina and Arizona — that the top two seeds in both conferences advanced to the AFC/NFC title games.

Drew Brees threw an interception and had a fumble that was recovered by teammate Ryan Ramczyk in the opening period. He bounced back from that rough start and took the Saints on scoring drives of 92, 79 and 67 yards after falling behind 14-0, helping New Orleans top Philadelphia 20-14. Brees went 28 of 38 for 301 yards, including had 2-yard touchdown passes to rookie Keith Kirkwood and All-Pro wideout Michael Thomas, who had 12 receptions for a franchise playoff-record 171 yards.

CRY ME A RIVERS

Philip Rivers was 25 of 51 for 331 yards, three touchdowns and an interception in Los Angeles' 41-28 loss at New England, falling to 0-5 in games played in Foxborough — including 0-3 in the postseason. Rivers dropped to 1-8 overall against New England in his career.

Philadelphia's 20-14 loss at New Orleans means the Eagles will not repeat as the NFL champion. No team has won the Super Bowl in consecutive years since the 2004 Patriots.

Sony Michel became the second rookie in Patriots history to have a rushing touchdown in the postseason, finishing with three in New England's 41-28 victory over the Los Angeles Chargers. He joined fellow Georgia alum, Robert Edwards, who ran for a touchdown as a rookie in New England's 1998 wild-card loss to Jacksonville. Michel also became the first New England player with two rushing TDs in the first quarter of a playoff game since LeGarrette Blount did it in the 2013 divisional-round win against Indianapolis.

Patriots guard Shaq Mason left New England's 41-28 win over the Los Angeles Chargers in the fourth quarter. ... New Orleans defensive tackle Sheldon Rankins went down midway in the first quarter of the Saints' 20-14 win over Philadelphia, unable to put any weight on his left foot. Two plays later, Eagles right guard Brandon Brooks hurt his right leg and departed. Both players were carted off the field.

"It's going to be a good game. They're a good team. We played them earlier this year. I know everybody thinks we suck and, you know, we can't win any games, so we'll see. It'll be fun." — Patriots quarterback Tom Brady on New England's AFC championship game matchup with Kansas City.

"We were real calm and poised and we knew we were going to get things done." New Orleans quarterback Drew Brees after the Saints stormed back from a 14-0 deficit for a 20-14 victory over Philadelphia.