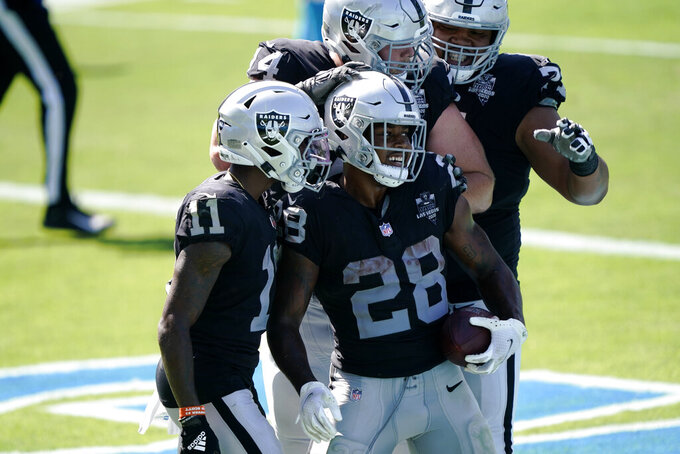 Las Vegas Raiders running back Josh Jacobs (28) celebrates after scoring during the second half of an NFL football game against the Carolina Panthers Sunday, Sept. 13, 2020, in Charlotte, N.C. (AP Photo/Brian Blanco)

Pittsburgh at N.Y. Giants, 7:10 p.m. Steelers quarterback Ben Roethlisberger makes his return after missing most of last season with an elbow injury. Big Ben has success in Monday nighters, with at least two TD passes in three of his last four such games. The game also marks Joe Judge’s debut as the Giants' coach after he was hired following eight years as an assistant under Bill Belichick in New England.

Tennessee at Denver, 10:20 p.m. The Titans have won four of their last five season openers on the road. But they'll face a Broncos team that is 30-7-1 all-time in home openers. No team has a better Week 1 mark than Denver’s 39-20-1. The game marks the Titans debut of recently signed defensive end Jadeveon Clowney. Denver running back Melvin Gordon will also be playing his first game for the Broncos, but star LB Von Miller (ankle) is out.

— Aaron Rodgers, Packers, threw for 364 yards and four touchdowns to lead Green Bay to a 43-36 win at Minnesota.

— Russell Wilson, Seahawks, had four touchdown passes and completed 31 of 35 passes for 322 yards in Seattle's 38-27 victory at Atlanta.

— Lamar Jackson, Ravens, threw for 275 yards and three touchdowns, going 20 of 25 while also racking up a team-high 45 yards rushing in Baltimore’s 38-6 rout of Cleveland.

— Christian McCaffrey, Panthers, rushed for 96 yards and two TDs while accounting for 134 yards from scrimmage in Carolina's 34-30 loss to Las Vegas.

— Adrian Peterson, Lions, ran for 93 yards on 14 carries in his Detroit debut, a 27-23 loss to Chicago, just four days after signing with the team.

— Cam Newton, Patriots, rushed for 15 times for 75 yards and two touchdowns while also throwing for 155 yards in his debut as New England's quarterback in a 21-11 victory over Miami.

— Calvin Ridley, Julio Jones and Russell Gage, Falcons, each had nine catches in Atlanta's 38-27 loss to Seattle. Ridley had two touchdown receptions and 130 yards receiving, while Jones had 157 yards receiving and Gage finished with 114.

— Ezekiel Turner, Cardinals, broke through and blocked a punt by Mitch Wishnowsky that Arizona recovered at the 10 and scored on the next play in a 24-20 win at San Francisco.

— Margus Hunt and Bennie Fowler, Saints. Hunt blocked a 54-yard field goal attempt in the first half of New Orleans' 34-23 win over Tampa Bay. Fowler recovered a muffed kickoff at the Tampa Bay 18 in the fourth quarter to set up a 21-yard field goal.

—Jaire Alexander, Packers had a sack, interception and a safety in a 43-36 win at Minnesota, becoming the fifth player to accomplish the feat in a single game since 2000.

— Ryan Kerrigan, Matthew Ioannidis and rookie Chase Young, Washington. Kerrigan had two sacks, while Ioannidis and Young each had 1 1/2 in a 27-17 victory over Philadelphia.

Jacksonville's James Robinson made NFL history in his pro debut, running for 62 yards — a record for undrafted rookie running backs in season openers — in the Jaguars' 27-20 win over Indianapolis. He became the first undrafted rookie running back in 30 years to start in Week 1. Washington’s Ralph Nelson held the previous high for yards rushing by an undrafted rookie in Week 1, gaining 44 yards against New Orleans on Sept. 21, 1975. ... Green Bay's Davante Adams tied Don Hutson’s franchise mark from Nov. 22, 1942, by catching 14 passes in the Packers' 43-36 win at Minnesota. ... Washington's Ryan Kerrigan set a franchise record in a 27-17 win over Philadelphia with his 92nd career sack, passing Dexter Manley. ... Tampa Bay's Tom Brady (43 years old) and New Orleans' Drew Brees (41) faced off in the first game in NFL history in which both starting quarterbacks were 40 or older, with the Saints coming out on top 34-23. It also was the first matchup since at least 1950 to feature the top two career leaders in TD passes. ... Seattle's Russell Wilson has 30,056 yards passing and 4,022 yards rushing, joining Pro Football Hall of Famer Steve Young as the only players in NFL history with at least 30,000 yards passing and 4,000 yards rushing.

Atlanta outgained Seattle 506 yards to 383, with Julio Jones, Calvin Ridley and Russell Gage all collecting more than 100 yards receiving. But the Falcons came up short all four times they tried to convert on fourth down in the 38-27 loss. ... Josh Allen became the first Bills QB since Tyrod Taylor on Dec. 24, 2016, to throw for 300 yards, going 33 of 46 for 312 yards with two touchdowns, plus another one rushing in a 27-17 win over the New York Jets. ... Green Bay's 43-36 win at Minnesota marked the Packers' highest points total against the Vikings since a 44-31 victory at the Metrodome on Oct. 27, 2013. It was also the most points Minnesota has allowed since coach Mike Zimmer was hired in 2014. ... Cam Newton ran 15 times for 75 yards in New England's 21-11 win over Miami, the most yards rushing by a Patriots quarterback since Steve Grogan had 81 in 1977.

Tom Brady was intercepted twice in his Tampa Bay debut, a 34-23 loss to New Orleans. The first of Brady’s interceptions led to a 6-yard touchdown run by Alvin Kamara. The second pick thrown by the new, 43-year-old Bucs QB — who left the New England Patriots in free agency after 20 years and six Super Bowl triumphs — was returned 36 yards for a touchdown by Janoris Jenkins. Brady was 15 of 28 for 157 yards and one TD through the first 54 minutes of the game. He padded his numbers in garbage time, finishing with 239 yards and two TDs, the second scoring strike going to Mike Evans with 2:41 left.

Cam Newton looked just fine as Tom Brady’s replacement, rushing for two touchdowns and New England beat Miami 21-11 to open the season. Newton ran 15 times for 75 yards and threw for 155 yards, leading a Patriots offensive attack that did most of its damage via the rushing game in their first game since the departure of Brady to Tampa Bay as a free agent. Newton’s 75 yards were the most by a Patriots quarterback since Steve Grogan had 81 in 1977. “It was relatively picking up right where I remember the game to be,” said Newton, the former Carolina Panthers QB who played for the first time in more than a year. Newton's 60 career TD runs are the most by a quarterback in NFL history. He also has seven career games with at least two rushing scores, tied with Otto Graham, Steve Young, Jack Kemp and Steve McNar for the most by a QB.

There were five coaching changes for this season, and the new guys in charge went 1-3 in the games earlier Sunday. Washington's Ron Rivera was the lone coach to win in his debut with his new team, beating Philadelphia 27-17. Carolina's Matt Rhule saw his team fall to Las Vegas 34-20, while Cleveland's Kevin Stefanski was defeated 38-6 at Baltimore. Mike McCarthy was coaching Dallas for the first time against the Los Angeles Rams on Sunday night and lost 20-17. Joe Judge and the New York Giants are hosting Pittsburgh on Monday night.

A bright spot for Atlanta in a 38-27 loss to Seattle was Matt Ryan going past John Elway for ninth on the NFL career passing yardage list. Matty Ice was 37 of 54 for 450 yards and two touchdowns, the second-highest yardage total of his career. Ryan has 51,636 career passing yards, while Elway had 51,475.

Peyton Barber ran for two touchdowns and Dwayne Haskins rallied Washington from a 17-point deficit to beat the Philadelphia Eagles 27-17 Sunday in coach Ron Rivera’s debut. After falling behind 17-0, Washington relied on a punishing defense and opportunistic offense in its first game since owner Dan Snyder finally agreed to change the team’s name and former employees alleged sexual harassment in the organization. Rivera lived up to his “Riverboat Ron” nickname earned in nine seasons with Carolina. In his first game after finding out he has a form of skin cancer, Rivera went for it on fourth-and-1 from the Eagles 5 with the score tied midway through the fourth quarter. Barber ran for the first down and then scored from the 3 to give Washington a 24-17 lead.

Heisman Trophy winner Joe Burrow ran 23 yards untouched for a touchdown — the best moment of his NFL debut — but the Los Angeles Chargers roughed him up and rallied for a 16-13 victory over Cincinnati. A line anchored by Joey Bosa and Melvin Ingram III held the quarterback from national champion LSU to 23 of 36 passing for 192 yards with three sacks and a costly interception. Twice, Burrow overthrew open receivers for what would have been touchdowns.

Mitchell Trubisky perfectly lofted a 27-yard go-ahead touchdown pass to Anthony Miller with 1:54 remaining and the Chicago Bears held on to beat the Detroit Lions 27-23. Trubisky threw three touchdown passes in the fourth quarter to help Chicago come back from a 17-point deficit. It looked familiar to Lions fans: Detroit opened last season by blowing an 18-point lead at Arizona and settling for a tie.

Gardner Minshew threw three touchdown passes, including a 22-yarder to Keelan Cole in the fourth quarter, and Jacksonville opened the season by stunning Indianapolis 27-20 and spoiling Philip Rivers’ debut with the Colts. Minshew gave the faithful plenty to celebrate. The second-year pro completed 19 of 20 passes for 173 yards and no turnovers. He connected with DJ Chark, rookie Laviska Shenault and Cole for scores — and looked sharp all day. Minshew’s only incompletion was a catchable ball early. He joined Drew Brees (2019), Philip Rivers (2018) and Marcus Mariota (2018) as the only QBs in history with a completion percentage of 95 of higher with a minimum of 20 attempts in a game.

With Carolina trailing Las Vegas 34-30, new Panthers offensive coordinator Joe Brady called a handoff to fullback Alex Armah — instead of All-Pro Christian McCaffrey — on fourth-and-inches at midfield, He was stopped at the line with 1:11 left. McCaffrey racked up 134 yards from scrimmage and scored two touchdowns. Coach Matt Rhule, making his debut, took blame for the call. “It’s a play we were all on board with,” McCaffrey said, referring to Armah picking up a first down on a similar play earlier.

Indianapolis running back Marlon Mack left in the first half of the Colts' 27-20 loss at Jacksonville with a right Achilles tendon injury. He caught a 3-yard pass at the Colts 48 midway through the second quarter and immediately went down before grabbing at his foot. The injury was initially described as an ankle injury before coach Frank Reich said after the game that it was Mack’s Achilles tendon. ... The New York Jets finished their 27-17 loss at Buffalo without running back Le’Veon Bell, who was ruled out in the second half because of a hamstring injury. Linebacker Blake Cashman has a groin injury. ... Miami lost top receiver DeVante Parker to a hamstring injury in a 21-11 loss to New England. ... Las Vegas lost both right tackles to injuries with Trent Brown leaving with a calf injury in the first quarter of a 34-30 win at Carolina and Sam Young in the third quarter with a groin issue.

“It was one of the strangest experiences I’ve had in the NFL, being in a stadium like this to have memories of some really rocking times.” — Green Bay quarterback Aaron Rodgers after leading the Packers to a 43-34 win over Minnesota at an empty U.S. Bank Stadium that was without fans because of the coronavirus pandemic.

“That was a little bit like Walter Payton used to play. It was hot as hell. He got beat up early. He insisted on coming back and he insisted on getting the ball as a runner and receiver. He is special. He deserves some national attention — and I hope you give it to him.” — Las Vegas coach Jon Gruden on running back Josh Jacobs, who ran for 93 yards and three touchdowns in the Raiders' 34-30 win at Carolina.

“The guy was incredible last year. To me, he’s obviously the best player in the world, and his arm reflects that.” — Baltimore tight end Mark Andrews on quarterback Lamar Jackson, who threw for 275 yards and three touchdowns, including two to Andrews, in the Ravens' 38-6 rout of Cleveland.