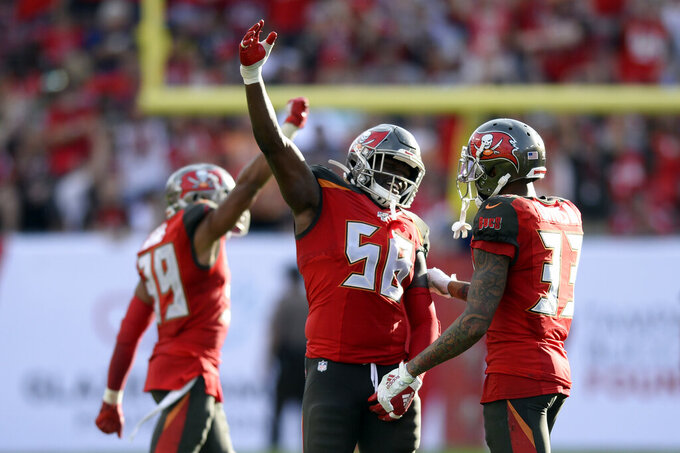 Tennessee at New England, 8:15 p.m. Tom Brady and the defending Super Bowl champion Patriots will be playing on wild-card weekend for the first time since 2009. They’ll take on the Titans (9-7), who secured their playoff spot with a 35-14 victory over Houston.

— Aaron Rodgers, Packers, finished 27 of 55 for 323 yards and two touchdowns and an interception in Green Bay’s 23-20 win over Detroit.

— Derrick Henry, Titans, had 32 carries for 211 yards and three touchdowns in Tennessee’s 35-14 win over Houston. Henry finished with 1,540 yards to lead the league and became the third player in franchise history to run for 15 or more touchdowns in a season.

— Joe Mixon, Bengals, had 26 carries for a career-high 162 yards and two touchdowns in Cincinnati’s 33-23 win over Cleveland.

— Damien Williams, Chiefs, had 12 carries for 124 yards and two touchdowns in Kansas City’s 31-21 victory over the Los Angeles Chargers.

— David Montgomery, Bears, had 23 carries for 113 yards and a touchdown in Chicago’s 21-19 win over Minnesota.

— Breshad Perriman, Buccaneers, finished with five catches for 134 yards and a touchdown in Tampa Bay’s 28-22 overtime loss to Atlanta.

— Mecole Hardman, Chiefs, returned a kickoff 104 yards for a touchdown in Kansas City’s 31-21 win over the Los Angeles Chargers.

— Jordan Richards, Ravens, recovered a fumble in the end zone for a touchdown when Steelers punter Jordan Berry couldn't handle the wet football in Baltimore’s 28-10 win over Pittsburgh.

— Younghoe Koo, Falcons, was 5 for 5 on field goals and added an extra point in Atlanta’s 28-22 overtime win over Tampa Bay.

— Dan Bailey, Vikings, was 4 for 4 on field goals and added an extra point in Minnesota’s 21-19 loss to Chicago.

— Devin White and Shaquil Barrett, Buccaneers. White returned a fumble 91 yards for a touchdown and Barrett had three sacks in Tampa Bay’s 28-22 loss to Atlanta.

— Deion Jones, Falcons, returned an interception 27 yards for a touchdown on the first play of overtime in Atlanta’s 28-22 win over Tampa Bay.

— A.J. Klein, returned an interception 14 yards for a touchdown in New Orleans’ 42-10 win over Carolina.

— Calais Campbell, Jaguars, returned a fumble 8 yards for a touchdown in Jacksonville’s 38-20 win over Indianapolis.

— Carlos Dunlap, Carl Lawson, Sam Hubbard and Darius Phillips, Bengals. Dunlap had 2½ sacks and a forced fumble, Lawson had two and Hubbard 1½ as they combined for all six sacks of the Browns’ Baker Mayfield and Phillips added two interceptions of the Cleveland quarterback in Cincinnati’s 33-23 win.

Baltimore led the NFL with 3,296 rushing yards in 2019 and passed the 1978 New England Patriots (3,165) for the most yards rushing by a team in a single season in NFL history. ... Detroit rookie quarterback David Blough, New England linebacker Elandon Roberts and Atlanta tackle Ty Sambrailo each had touchdown receptions in Week 17. Blough, who caught a 19-yard touchdown pass against Green Bay, joined Marcus Mariota (Dec. 13, 2015) as the only rookie quarterbacks to have a touchdown reception since 1970. Roberts caught a 38-yard touchdown pass against Miami, the longest touchdown reception by a linebacker since 1970. Sambrailo had a 35-yard touchdown reception against Tampa Bay, the longest touchdown catch by an offensive lineman since 1970. ... Buffalo Bills running back Frank Gore played his 226th regular-season game, tying Emmitt Smith for most by a running back in NFL history. Starting in place of rookie Devin Singletary, the 36-year-old Gore was limited to playing the first half in which he finished with six carries for 26 yards and three catches for 16.

The Baltimore Ravens closed the regular season on a 12-game winning streak as they topped the Pittsburgh Steelers 28-10. ... After losing to Miami, New England (12-4) will have to play in the opening weekend of the postseason for the first time since 2009. The Tom Brady/Bill Belichick Patriots have never made the Super Bowl while playing in the wild-card round. ... Tennessee’s 35-14 win was its first at Houston since Jan. 1, 2012. ... The Lions (3-12-1) closed the season with nine straight losses for their longest losing streak in a season since going 0-16 in 2008. ... Cleveland's Nick Chubb ran for 41 yards and finished the season with 1,509 yards, the most by a Browns running back since Jim Brown had 1,544 in 1965. For the first time, the Browns had two receivers (Odell Beckham Jr. and Jarvis Landry) and a running back each top 1,000 yards in a season. ... Cincinnati's Joe Mixon ran for a career-high 162 yards and topped 1,000 for the second straight season and the Bengals’ Tyler Boyd topped 1,000 yards receiving for the second year in a row. The Bengals ended a streak of 10 straight losses to AFC North opponents with a 33-23 win over Cleveland. ... The Falcons (7-9) closed the season with six wins in eight games with a 28-22 victory over Tampa Bay. ... Carolina allowed 31 touchdowns rushing this season, which tied for the most since the NFL-AFL merger. ... The Eagles’ Carson Wentz set a single-season franchise record with 4,039 yards passing despite not having one wide receiver reach 500 yards. Alshon Jeffery had 490, Nelson Agholor had 363 and DeSean Jackson had 159. ... Tennessee’s Derrick Henry had 32 carries for 211 yards and three touchdowns in the Titans’ 35-14 win over Houston. He finished with 1,540 yards to lead the league and became the third player in franchise history to run for 15 or more touchdowns in a season, joining Earl Campbell (19 in 1979) and LenDale White (15 in 2008). Henry is the first Titan to lead the NFL in rushing since Chris Johnson had 2,006 yards in 2009.

Carolina’s Christian McCaffrey became the third player in NFL history to finish with 1,000 yards rushing and 1,000 yards receiving in the same season after coming up just short last year. McCaffrey reached that milestone in the loss to the Saints, joining Roger Craig and Marshall Faulk in that elite club.

“It's cool to accomplish one of the goals that you write down,” McCaffrey said. “But I can't reiterate this enough: The most important statistic is winning. And it's a shame when I look at guys like Luke Kuechly and Greg Olsen and they deserve better. There's a lot to learn from this season.”

McCaffrey finished the season with 2,392 yards from scrimmage, which ranks third in NFL history behind Chris Johnson and Faulk.

Five of the 12 teams to qualify for the playoffs are new to the postseason this year, having missed out a season ago: Buffalo, Green Bay, Minnesota, San Francisco and Tennessee.

Freddie Kitchens made a great first impression. Everything after that was underwhelming. Kitchens, who famously crowed “if you don't wear brown and orange, you don't matter” at his introductory news conference less than a year ago, was fired Sunday night by the Cleveland Browns (6-10) following a season in which he failed to lead a talented team to a .500 record — let alone the playoffs. Kitchens was dismissed shortly after the Browns returned to team headquarters following a 33-23 loss to the lowly Cincinnati Bengals (2-14), who ended Cleveland's disheartening season and an inglorious 16-game run for the former running backs coach who was hoping for more time.

The Cardinals-Rams game marked the end of the NFL's latest tenure in the Coliseum, Los Angeles' venerable sporting landmark. Since the Rams first arrived from Cleveland in 1946, the Coliseum has hosted three NFL championship games and two Super Bowls — including the first — along with 23 Pro Bowls and 51 regular seasons for the Rams and Raiders. The Rams moved back into the Coliseum when they returned home from St. Louis in 2016. They ended their tenure in style, with a special commemorative logo painted at midfield along with diamond-patterned end zones and colorful bunting on the Peristyle designed to evoke the stadium's feel from a half-century ago.

Shaquil Barrett had three of Tampa Bay's six sacks of Matt Ryan in the Buccaneers' 28-22 win over Atlanta. Barrett, who had 19½ sacks after signing a one-year, $4 million contract in free agency, broke Hall of Famer Warren Sapp's Tampa Bay single-season record of 16½.

Chiefs safety Juan Thornhill injured a knee in Kansas City's victory over the Los Angeles Chargers. Thornhill's injury appeared serious — he needed the help of two trainers to limp off the field, never putting any weight on his knee. The Chiefs already were missing cornerback Morris Claiborne to a shoulder injury, and cornerback Bashaud Breeland left the game with an illness. For the Chargers, defensive back Desmond King left in the first half with an ankle injury. ... Starting Bills cornerback Levi Wallace was carted off with a right ankle injury in Buffalo's loss to the New York Jets. He was hurt when his cleat got caught in the turf as he intercepted Sam Darnold's pass. Bills right tackle Ty Nsekhe was also carted off the sideline after hurting his ankle on the opening drive of the third quarter. Nsekhe had just returned to the lineup after missing five games with an ankle injury. ... The Minnesota Vikings were locked into the No. 6 seed in the NFC, but still lost defensive tackle Armon Watts and offensive tackle Rashod Hill to left leg injuries in their loss to the Chicago Bears. ... The Green Bay Packers had three players get hurt as they secured a first-round playoff bye with a victory over the Detroit Lions. They were: center Corey Linsley (back), right tackle Bryan Bulaga (concussion) and linebacker B.J. Goodson (neck).

“We didn’t play the way we’re capable of playing and it ended up costing us. Just too many bad mistakes." — Patriots quarterback Tom Brady after his team’s 27-24 loss to Miami that cost it a first-round bye in the AFC playoffs.

“Am I disappointed? Obviously. Am I concerned? Yes. You're always concerned when you have a disappointing season. But for this moment, when I leave here, I might have a little bit more than one beer." — Jaguars coach Doug Marrone on his job status for next season.