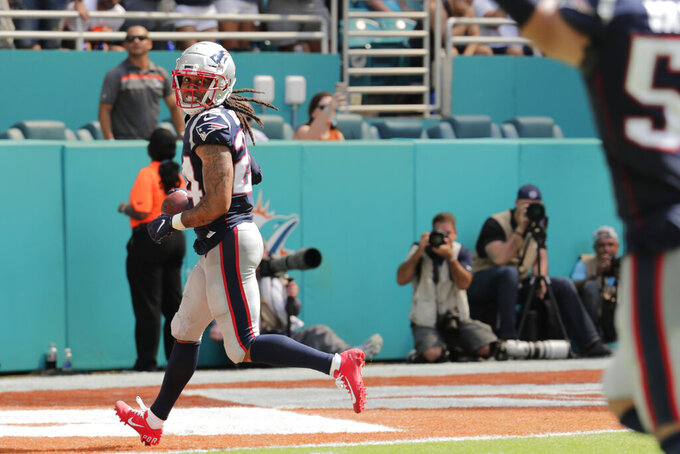 New England Patriots cornerback Stephon Gilmore (24) looks back after scoring a touchdown, during the second half at an NFL football game against the Miami Dolphins, Sunday, Sept. 15, 2019, in Miami Gardens, Fla. (AP Photo/Lynne Sladky) 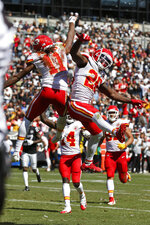 Cleveland at New York Jets, 8:15 p.m. EDT. Baker Mayfield and the Browns (0-1) take on the Jets (0-1) and Trevor Siemian, who starts at quarterback after Sam Darnold was diagnosed with mononucleosis during the week. The prime-time matchup is loaded with juicy angles, including Browns wide receiver Odell Beckham returning to MetLife Stadium for the first time since the Giants traded him in the offseason. Beckham also accused current Jets defensive coordinator Gregg Williams of instructing his players to use dirty tactics — something Williams denied.

— Patrick Mahomes, Chiefs, bounced back from the first scoreless opening quarter of his career in the regular season by throwing four touchdown passes in a nearly perfect second period and finished with 443 yards passing to lead Kansas City past Oakland 28-10.

— Russell Wilson, Seahawks, threw for 300 yards and three touchdowns in Seattle's 28-26 victory over the Pittsburgh Steelers.

— Jimmy Garoppolo, 49ers, tied his career high with three touchdown passes and finished 17 of 25 for 297 yards with an interception in San Francisco's 41-17 rout of Cincinnati.

— Jacoby Brissett, Colts, passed for three touchdowns, including a 4-yard toss to T.Y. Hilton with 4:38 left to lead Indianapolis to a 19-17 victory over Tennessee.

— Dalvin Cook, Vikings, had a career-high 154 yards rushing and a touchdown on 20 carries in Minnesota's 21-16 loss at Green Bay.

— Matt Breida, 49ers, filled in for the injured Tevin Coleman and ran for 121 yards on 12 carries to help San Francisco rout Cincinnati 41-17.

— Ezekiel Elliott, Cowboys, rushed for 111 yards and a touchdown on 23 carries in Dallas' 31-21 win at Washington.

— Julio Jones, Falcons, hauled in a short pass on fourth down and took it 54 yards to the end zone with 2:10 remaining for his second TD of the game, giving Atlanta a 24-20 victory over Philadelphia.

— Kenny Golladay, Lions, caught eight passes for 117 yards and a TD to help lift Detroit past the Los Angeles Chargers 13-10.

— Mark Andrews, Ravens, had eight receptions for 112 yards and a score in Baltimore's 23-17 win over Arizona.

— Stephon Gilmore and Jamie Collins, Patriots, each scored defensive touchdowns in New England's 43-0 rout at Miami. Gilmore returned an interception 54 yards for a score, and Collins went 69 yards for a touchdown on an INT — the first of two he had in the game.

Arizona rookie quarterback Kyler Murray became the second player in NFL history with 300 or more yards passing in each of his first two games, joining Carolina's Cam Newton (2011). ... With a touchdown reception against Washington, Dallas' Jason Witten became the fifth tight end in NFL history to reach 70 receiving touchdowns. He joins Antonio Gates (116), Tony Gonzalez (111), Rob Gronkowski (79) and Jimmy Graham (72). ... Buffalo's Josh Allen recorded his 10th career rushing TD in his 14th career game, becoming the second-fastest quarterback in NFL history to reach the mark. Only Newton, in 11 games, did it faster. ... With a TD run against Dallas, Washington's Adrian Peterson surpassed Jim Brown (106) for the fifth-most in NFL history. ... Pittsburgh's JuJu Smith-Schuster became the youngest player to reach 2,500 yards receiving, doing so at 22 years and 297 years old. Randy Moss had been the youngest at 22 years, 310 days. ... Oakland's Derek Carr has 19,196 yards passing, surpassing Ken Stabler for No. 1 on the Raiders' career list.

Detroit's Matthew Stafford threw a long pass up for grabs in the end zone early in the third quarter of the Lions' 13-10 win over the Chargers and Casey Hayward came down with it, ending the NFL's longest active streak of throws without an interception at 181. ... With a touchdown catch in New England's 43-0 rout of Miami, James White joined Chuck Foreman (23) and Brian Westbrook (23) as the only running backs to record at least 20 TD receptions in their first six seasons. ... San Francisco had 573 total yards in a 41-17 win at Cincinnati, the 49ers' highest total in seven years. They've topped 30 points in each of their first two games for the first time since 1998. The 41 points were the most allowed by the Bengals in a home opener.

Seattle is 2-0 for the first time since 2013, when Russell Wilson guided the franchise to its only Super Bowl victory. ... Pittsburgh is 0-2 for just the second time in Mike Tomlin's 13-year tenure. ... New England is the fourth team since 1967 to allow three points or fewer through its first two games to start a season. The Patriots beat Miami 43-0 on Sunday after opening the season with a 33-3 win over Pittsburgh. ... San Francisco improved to 2-0 for the first time since 2012. The 49ers opened the season with back-to-back road wins for the first time since 1989, when Joe Montana's crew was coming off its second Super Bowl win over the Bengals. ... The Giants, who were undefeated in the preseason, are off to their sixth 0-2 start since 2013.

Antonio Brown caught a 20-yard touchdown pass in his debut for New England, a 43-0 win over Miami. Brown also made an 18-yard catch on his first play for the Patriots, who signed him Monday. He finished with 56 yards on four receptions, all in the first half. The NFL allowed the four-time All-Pro receiver to play despite a civil lawsuit filed Tuesday by his former trainer accusing him of sexually assaulting her on three occasions.

The NFC championship rematch between New Orleans and the Los Angeles Rams also contained early refereeing drama that left the Saints steamed after a 27-9 loss. New Orleans' Cameron Jordan had a long fumble return for a touchdown wiped out in the second quarter. The play initially was ruled an incomplete pass before video review determined Jared Goff had fumbled, but Jordan's long return didn't count because officials had blown the play dead. Jordan was still furious after the game, even referring to the refs as "the Foot Locker" and saying certain members of the officiating crew "were maybe in their prime a decade ago." The Rams' 26-23 overtime win in New Orleans last January turned on the infamous uncalled pass interference late in regulation by Rams cornerback Nickell Robey-Coleman.

Patrick Mahomes' 278 yards passing in the second quarter of Kansas City's 28-10 win at Oakland were the most for a player in any quarter since Drew Brees had 294 in the fourth period against Atlanta on Nov. 9, 2008. Mahomes ended the quarter with a bang, with his last five pass attempts each going for at least 27 yards. The streak extended with a 28-yarder to Demarcus Robinson on the first play of the third quarter before Mahomes finally threw an incompletion.

Baltimore quarterback Lamar Jackson passed for 272 yards and two touchdowns and rushed for a career-high 120 yards in the Ravens' 23-17 win over Arizona. He became the first player with at least 250 yards passing and 120 yards rushing in a single game in NFL history. Jackson, who had 119 yards rushing in Week 11 of last season, is the fourth quarterback since 1970 with two career games of at least 115 rushing yards, joining Michael Vick (six games), Randall Cunningham (two) and Bobby Douglass (two).

Arizona rookie quarterback Kyler Murray passed for 349 yards in the Cardinals' 23-17 loss at Baltimore. Murray, who threw for 308 yards in his first career start, joined Cam Newton (2011) as the only players with at least 300 yards passing in each of their first two career games.

Adam Vinatieri, the NFL's oldest player and career scoring leader, missed two extra points in Indianapolis' 19-17 win at Tennessee. He also missed an extra point and a pair of field goals last week in the same game for the first time in his career. With a chance to put the Colts up 14-7 midway through the second quarter against the Titans, the 46-year-old Vinatieri pulled the extra point wide left. After the go-ahead TD, Vinatieri clanked the extra point off the right upright.

Justin Reid stopped Leonard Fournette on a 2-point conversion attempt with 36 seconds left, and the Houston Texans held on to edge the Jacksonville Jaguars 13-12. Houston led by seven in the fourth quarter when Jacksonville rookie Gardner Minshew led a long drive that included an 18-yard run on fourth-and-10, and he capped it with a 4-yard TD pass to DJ Chark. Instead of trying to tie it with an extra point, Jaguars coach Doug Marrone opted to go for the potential win by having Fournette attempt to run it in for the 2-point conversion. But the big running back was stopped by Reid. The play was upheld by video review, giving the Texans the victory.

Emmanuel Sanders caught a touchdown pass with 31 seconds left and Broncos coach Vic Fangio sent out his team to line up for a 2-point conversion. But a delay of game pushed Denver back 5 yards, so Fangio sent Brandon McManus out instead for the extra point and the tie. McManus was wide right and the Bears went wild — but Buster Skrine was called for being offside and the Broncos moved up to the 1. Out came their offense again, and with an empty backfield, Joe Flacco backpedaled and hit Sanders at the goal line in front of Fuller to give Denver a 14-13 lead. It was short-lived, though, as Eddy Pineiro kicked a 53-yard field goal as time expired — after officials put 1 second back on the clock following Mitchell Trubisky's completion to Allen Robinson II on fourth-and-15 — leading Chicago to a wild 16-14 win.

After being sacked six times in a loss to New Orleans last week, Houston's Deshaun Watson was sacked four times in the Texans' 13-12 win over Jacksonville — marking the eighth straight game in which he has been sacked at least four times. That ties him with Blake Bortles (2014-15) and Jeff George (1997-98) for the longest streak of games with at least four sacks since it became an official statistic in 1982.

Ben Roethlisberger left Pittsburgh's 28-26 loss to Seattle with an unspecified right elbow injury late in the first half. The 37-year-old Roethlisberger grimaced after throwing a pair of passes on a drive late in the second quarter. Though he was under duress several times during the first half, he didn't appear to be touched on the plays that left him clutching the elbow. ... New Orleans' Drew Brees was forced out of his NFC title game rematch against the Rams late in the first quarter of the Saints' 27-9 loss. His throwing hand collided with Aaron Donald's outstretched hand while he threw an incompletion on the Saints' second drive, and the NFL's career leader in yards passing spent the afternoon on the Coliseum sideline with his thumb heavily wrapped. Along with Brees, the Saints lost left guard Andrus Peat to an ankle injury in the second half. Linebacker A.J. Klein also went to the locker room in the second half, too. ... The Rams lost two offensive starters: right guard Austin Blythe injured his ankle in the first half, and tight end Tyler Higbee had a chest injury early in the second half. ... San Francisco left tackle Joe Staley broke the fibula in his left leg in the third quarter of his team's 41-17 rout of Cincinnati.

"We're playing 60 minutes." — New England coach Bill Belichick, who was determined to play to the final gun after allowing a miracle comeback at Miami last year. Belichick had Tom Brady still throwing at the end and the Patriots beat the Dolphins 43-0.

"When you have time and you ain't getting no pressure, I can't cover nobody for 10 seconds. Who can cover somebody for 10 seconds? Go look at the first five seconds of the route. He's not open. If you scramble and there is no pressure getting there, what do you want me to do? I can't cover from side to side. Like, come on, bro. We've got to play football around here." — Giants cornerback Janoris Jenkins, miffed that New York's secondary is taking the brunt of criticism for the team's 0-2 start.