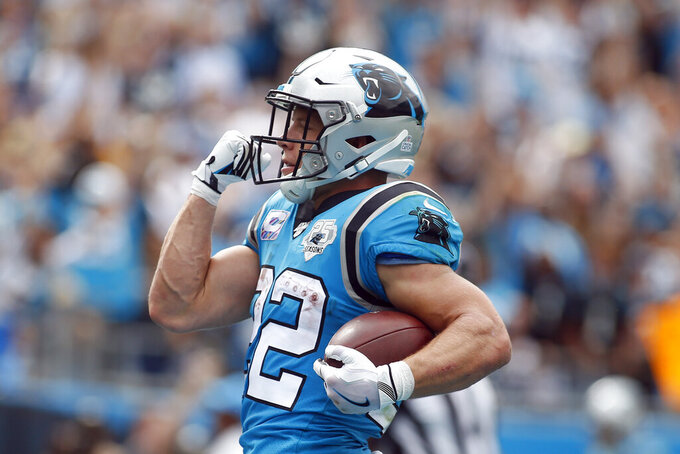 Carolina Panthers running back Christian McCaffrey (22) celebrates a touchdown against the Jacksonville Jaguars during the first half of an NFL football game in Charlotte, N.C., Sunday, Oct. 6, 2019. (AP Photo/Brian Blanco)

Cleveland at San Francisco, 8:15 p.m. EDT. Baker Mayfield and the Browns (2-2) are playing their third prime-time game already this season, going 1-1 so far with a win over the Jets and a loss to the Rams. Jimmy Garoppolo will make his first prime-time start, looking to lead the 49ers to their first 4-0 start since 1990.

— Deshaun Watson, Texans, passed for a career-high 426 yards and tied his personal best with five touchdown passes, including three to Will Fuller to lead the Houston Texans to a 53-32 win over Atlanta.

— Tom Brady, Patriots, threw for 348 yards and three touchdowns in New England's 33-7 rout of winless Washington and moved into third place on the NFL's career list for yards passing.

— Josh Allen, Bills, threw for 219 yards and two touchdowns as Buffalo beat Tennessee 14-7 and improved to 3-0 on the road to start a season for the first time since 1993.

— Matt Ryan, Falcons, had 330 yards passing with three touchdowns and one interception in a losing cause for Atlanta, which lost 53-32 at Houston.

— Christian McCaffrey, Panthers, scored three touchdowns, including a franchise-record 84-yard run, and piled up 237 yards from scrimmage — including 176 yards on the ground — and Carolina topped Jacksonville 34-27.

— Aaron Jones, Packers, scored a career-high four touchdowns and finished with 107 yards rushing and 75 yards receiving on seven catches for a career-high 182 scrimmage yards in Green Bay's 34-24 victory over Dallas.

— Josh Jacobs, Raiders, ran for 123 yards and two touchdowns, including a leap from the 2-yard line with 1:57 to play that capped a 97-yard drive that helped Oakland rally after blowing a 17-point lead to beat Chicago 24-21 in London.

— Phillip Lindsay, Broncos, ran for 114 yards and a touchdown in a 20-13 win over the Los Angeles Chargers.

— Will Fuller, Texans, had a career-best 217 yards receiving on 14 catches and got into the end zone three time in Houston's 53-32 victory over Atlanta.

— D.J. Chark, Jaguars, had eight catches for 164 yards and two touchdowns in Jacksonville's 34-27 loss at Carolina.

— Zane Gonzalez, Cardinals, kicked a 31-yard field goal on the final play as Arizona got its first win under coach Kliff Kingsbury, 26-23 over Cincinnati.

— Justin Tucker, Ravens, made a 46-yard field goal in overtime to lift Baltimore past Pittsburgh 26-23.

— Desmond King, Chargers, returned a punt 68 yards for a touchdown in Los Angeles' 20-13 loss to Denver.

— Nate Gerry and Orlando Scandrick, Eagles. Gerry returned an interception 51 yards for a score and Scandrick took a strip-sack 44 yards for a TD in Philadelphia's 31-6 rout of the New York Jets.

— Anthony Barr, Vikings, tackled running back Jon Hilliman in the end zone for a safety in Minnesota's 28-10 win over the New York Giants.

— Brian Burns, Panthers, had a 56-yard fumble return for a touchdown to help Carolina top Jacksonville 34-27.

— Tashaun Gipson, Texans, returned an interception 79 yards for a touchdown in the final minute of Houston's 53-32 rout of Atlanta.

Tom Brady passed Brett Favre for third place on the NFL's career list with 71,923 yards passing. Brady now trails only Peyton Manning (71,940 yards) and Drew Brees (74,845). The New England quarterback also edged closer to Manning's record 539 touchdown passes, connecting with Julian Edelman, Brandon Bolden and Ryan Izzo in the Patriots' 33-7 win at Washington to bring his total to 527. ... Philadelphia running back/punt returner Darren Sproles moved past Tim Brown into fifth place on the NFL's all-time list for all-purpose yards. Brown had 19,682 yards. Jerry Rice is first with 23,546. ... Carolina's Ron Rivera passed John Fox for the most coaching wins in franchise history with 74. ... Atlanta's Matt Ryan joined Kurt Warner, Steve Young and Peyton Manning as the only players with at least 300 yards passing in each of their team's first five games of a season.

Kansas City's record streak of 22 straight games scoring at least 26 points came to an end with a 19-13 loss to Indianapolis. ... New England had six sacks in its 33-7 win at Washington, marking the first time in franchise history the Patriots have four straight games with at least five sacks. The Patriots also completed a fifth consecutive game without allowing a touchdown pass, the first team to pull off that feat since the 1988 Cleveland Browns. ... The Jets went 12 straight quarters without an offensive touchdown before Vyncint Smith scored on an end-around in the third quarter of New York's 31-6 loss at Philadelphia. That was the longest streak in the league since the Titans went 14 straight quarters without an offensive TD in 2010. ... The Eagles improved to 11-0 against the Jets.

Philadelphia became the first team in NFL history to have 10 sacks and score two defensive touchdowns in a single game in its 31-6 win over the New York Jets. Nate Gerry returned an interception 51 yards for a score and Orlando Scandrick took a strip-sack 44 yards for a TD. It marked the first time the Eagles had a pick-6 and a fumble return TD since Buddy Ryan's defense did it on Nov. 12, 1990, against the Redskins. It's the third time they've done it in the Super Bowl era. Brandon Graham had three of the Eagles' 10 sacks.

Mason Rudolph threw for 131 yards and a score in Pittsburgh's 26-23 overtime loss to Baltimore before suffering a concussion following a hit to the chin by Ravens safety Earl Thomas. Backup Devlin Hodges played admirably in Rudolph's place, throwing for 68 yards and directing a pair of scoring drives after Rudolph's exit. With the Ravens leading 17-13 in the third quarter, the Steelers were facing third-and-11 at the Pittsburgh 12 when Rudolph dropped back to pass. The play broke down and Rudolph scrambled to his left and stepped upfield. He flicked the ball to teammate James Washington just before the crown of Thomas' helmet hit Rudolph under the chin. Rudolph fell to the ground and lay on the field motionless for several minutes while several teammates became visibly upset as the stadium fell silent. Rudolph was able to stand up and be helped off the field by several teammates, a move made necessary when the medical cart wouldn't start.

Christian McCaffrey had 237 yards from scrimmage, including 176 yards on the ground, and three touchdowns before exiting Carolina's 34-27 win over Jacksonville with five minutes remaining due to leg cramps. McCaffrey, who had a franchise-record 84-yard touchdown run, had six catches for 61 yards. He's on pace for 2,771 yards from scrimmage, which would shatter the NFL single-season record of 2,509 yards set by Tennessee's Chris Johnson in 2009. McCaffrey has 587 yards rushing and 279 yards receiving, making him and Thurman Thomas (1991) the only players in NFL history to record at least 500 yards rushing and 250 yards receiving in their team's first five games.

Deshaun Watson threw for a career-high 426 yards and his five touchdowns tied a personal best in a 53-32 win over Atlanta. He was 28 of 33 and became the first player to top 400 yards passing against the Falcons since Week 16 of 2012. It was the second-most points in franchise history behind the 57 they scored in a win over the Titans in 2017. Watson is also the first player in the NFL to throw for at least 400 yards and five touchdowns with five incompletions or fewer in a game.

Josh Allen threw for 219 yards and two touchdowns as the Buffalo Bills beat the Tennessee Titans 14-7 Sunday in a defensive showdown for their third straight win in this series. The Bills (4-1) now have won three consecutive games away from Buffalo for the first time since 2004. It's also the first time they've started a season perfect through three road games since 1993.

Tennessee kicker Cairo Santos pulled his first field goal attempt wide left from 50 yards, tried to fix the issue and overcorrected, yanking his next attempt from 36 yards wide right. It only got worse for the Titans' replacement kicker in a 14-7 loss to Buffalo. After officials wiped a touchdown off the board for Marcus Mariota being over the line of scrimmage when he threw a pass to A.J. Brown, Santos lined up from 33 yards for the go-ahead field goal, only to have Darryl Johnson of the Bills block his kick. Coach Mike Vrabel sent Santos out for one last field goal — and Santos missed again, this time wide left from 53 yards. "Never had a day like this," Santos said. "Have been bouncing around with teams for years and just haven't had a performance like this."

Carolina's Kyle Allen became the first undrafted quarterback to win his first four career NFL starts since Kurt Warner in 1999, beating Jacksonville 34-27. Allen, playing in place of the injured Cam Newton, went 17 of 30 for 181 yards with a touchdown in the Panthers' win. He's also the first quarterback in the Super Bowl era to begin his career 4-0 without throwing an interception in his first four career starts.

MURRAY IN A HURRY

Kyler Murray got the ball with 2:00 left and threw a 24-yard pass — perfect, right down the sideline — and scrambled 24 yards to get Arizona in position for its first win of the season, 26-23 over Cincinnati. "I just looked at him and said, 'This is what we drafted you for,'" Cardinals running back Chase Edmonds said of the No. 1 overall pick in April. Zane Gonzalez completed the drive with a 31-yard field goal on the final play, sealing the Cardinals' first win under coach Kliff Kingsbury. "That's who he is," Kingsbury said of Murray. "He doesn't blink. He just made plays with his arm and his legs."

Melvin Gordon had 38 scrimmage yards, including 31 on the ground, in the Los Angeles Chargers' 20-13 loss to Denver, his first game back after a 64-day holdout due to a contract dispute. The Chargers got him involved quickly with a 4-yard screen pass on their first play. Gordon reported back on Sept. 26 and was activated prior to last week's game at Miami but did not play.

Pittsburgh quarterback Mason Rudolph left the game against Baltimore after suffering a concussion following a hit to the chin by Ravens safety Earl Thomas in the third quarter on Sunday. Rudolph limply fell to the ground and laid there with his eyes closed while medical personnel rushed to attend to him. Rudolph woozily made his way off the field and to a nearby hospital for further evaluation. ... The New York Giants have lost another running back. Wayne Gallman, who was starting for the injured Saquon Barkley, was knocked out of the game against the Minnesota Vikings with a concussion. ... Broncos cornerback De'Vante Bausby was strapped to a backboard and taken off the field on a cart during the second quarter against the Los Angeles Chargers. He was injured when he collided with teammate Alexander Johnson while making a tackle on running back Austin Ekeler. Bausby was taken to a hospital and was reported to have movement in his arms and legs. Chargers center Mike Pouncey suffered a neck injury during the first half and did not return.

— "No one's told me anything. I don't have a concern. If the key works Monday, keep working, go attack the Miami Dolphins and plan on getting our first win next week." — Washington's beleaguered coach Jay Gruden, whose Redskins fell to 0-5 with a 33-7 loss to New England.

"When you see somebody lying lifeless like that it kind of strikes a bell. Any human being that cares about somebody in that type of situation will feel a certain way. ... When something like that happens, it makes a trigger go off in your brain and you've got to control yourself." — Pittsburgh linebacker Bud Dupree after quarterback Mason Rudolph was knocked out on a helmet hit by Baltimore's Earl Thomas in the Ravens' 26-23 overtime win.

"You keep pulling from that thesaurus. There's a whole bunch of words you can use to describe the way he plays and the amount of energy he plays with." — Carolina coach Ron Rivera on running back Christian McCaffrey, who had 237 yards from scrimmage in the Panthers' 34-27 win over Jacksonville.