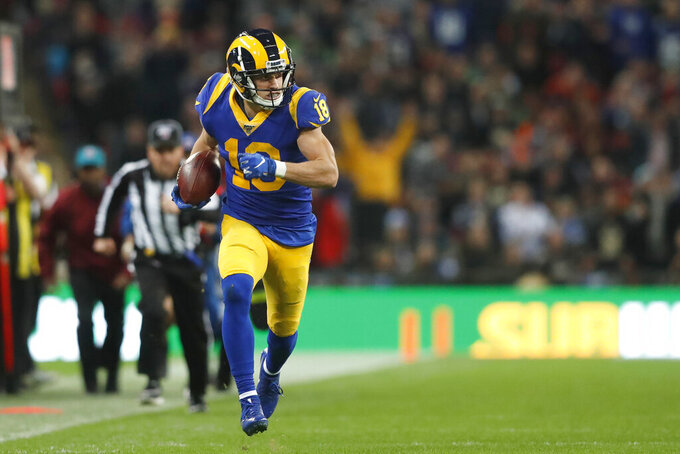 Miami at Pittsburgh, 8:15 p.m. EDT. The winless Dolphins (0-6) have dropped nine straight going back to last season and look to end that drought with Ryan Fitzpatrick making his second straight start. Miami is making its NFL-record 85th "Monday Night Football" appearance and is 42-42 in those games. The Steelers (2-4) are coming off a bye week and Mason Rudolph will be back under center after missing Pittsburgh's previous game with a concussion.

— Drew Brees, Saints, passed for 373 yards and three touchdowns in his first game in more than five weeks since thumb surgery, and New Orleans won its sixth straight with a 31-9 victory over Arizona.

— Matthew Stafford, Lions, was 25 of 32 for 342 yards and three touchdowns with an interception to help Detroit to a 31-26 win over the New York Giants.

— Gardner Minshew, Jaguars, completed 22 of 34 passes for 279 yards and three touchdowns, and also scrambled for another 32 yards in a 29-15 victory over the New York Jets.

— Tevin Coleman, 49ers, ran for three touchdowns and finished with 105 yards on 11 carries, and also caught a TD pass to help San Francisco remain unbeaten with a 51-13 victory over Carolina.

— David Montgomery, Bears, had 135 yards and a touchdown on 27 carries in a losing cause as Chicago fell 17-16 to the Los Angeles Chargers.

— Michael Thomas, Saints, had 11 receptions for 112 yards and a TD as New Orleans rolled past Arizona 31-9.

— Adam Vinatieri, Colts, made a 51-yard field goal with 22 seconds left to help Indianapolis rally for a 15-13 victory over Denver.

— Josh Lambo, Jaguars, has made 23 straight field goals after making all three of his attempts in a 29-15 win over the New York Jets.

— Nick Bosa, 49ers, had three sacks and an interception in San Francisco's 51-13 win over Carolina.

— Devon Kennard, Lions, had a 13-yard fumble return for a score in Detroit's 31-26 win over the New York Giants.

— Bruce Irvin, Panthers, had two sacks, including one in the end zone for a safety, in Carolina's 51-13 loss at San Francisco.

New England's Bill Belichick became the third coach in NFL history to earn 300 wins, including the postseason, with a 27-13 victory over Cleveland. He joins Don Shula (347 wins) and George Halas (324). ... Seattle's Russell Wilson threw two touchdown passes without an interception in a 27-20 win at Atlanta, making him the first player in NFL history with at least one TD pass and zero INTs in eight consecutive road games. ... The Rams' Todd Gurley has 63 total touchdowns in 65 games, tied with Marcus Allen, Terrell Davis and LaDainian Tomlinson for the second-most in that span since 1970. Only Chuck Foreman with 64 had more in his first 65 games. ... Tampa Bay's Mike Evans had 11 catches in the Buccaneers' 27-23 loss at Tennessee, giving him 433 and making him the franchise leader. He surpassed James Wilder's 430 receptions. ... Los Angeles Rams left tackle Andrew Whitworth, who spent his first 11 NFL seasons with the Bengals, became the 12th player to earn a victory as a starter against all 32 NFL teams with a 24-10 win. ... Bills running back Frank Gore became the NFL's fifth player to reach 19,000 yards from scrimmage.

New Orleans' Drew Brees passed for 373 yards with three touchdowns and one interception for a 116.4 rating in the Saints' 31-9 victory against Arizona. He has 159 games with at least two TD passes, tied with Brett Favre for the third most in NFL history. Only Tom Brady (170) and Peyton Manning (165) have more. ... Atlanta quarterback Matt Ryan's streak of 154 consecutive regular-season starts ended as he was held out of the Falcons' 27-20 loss to Seattle with a sprained right ankle.

San Francisco rookie Nick Bosa had three sacks and an interception in the 49ers' 51-13 win over Carolina, becoming the third rookie since 1982 — when sacks became an official statistic — to have at least three sacks and an INT. He joined Julius Peppers (2002) and Kevin Williams (2003). His seven sacks are second to only Mark Anderson's 7½ in 2006 for the most by a player in his first seven games since 1982. Bosa's brother Joey of the Los Angeles Chargers had two sacks in a win at Chicago, marking the second time a pair of brothers each had at least two sacks in the same week, joining Jimmy and Toby Williams, who each had two in 1985.

Los Angeles Rams wide receiver Cooper Kupp had seven catches for a career-high 220 yards and one touchdown in a 24-10 victory over Cincinnati at Wembley Stadium in London. His 220 receiving yards are the most in a single international game in NFL history, surpassing Brandon Lloyd's 169 with Denver in 2010 at Wembley.

Atlanta's Matt Schaub threw for 460 yards in the Falcons' 27-20 loss to Seattle. At 38 years and 124 days old, he's the third quarterback 38 or older to pass for at least 450 yards in a game in NFL history, joining Peyton Manning (479 at 38 years, 195 days old) and Tom Brady (466 at 38 years, 48 days old). ... Indianapolis' Adam Vinatieri kicked a 51-yard field goal in the Colts' 15-13 win over Denver. At 46 years and 303 days old, Vinatieri is the oldest player to make a game-winning field goal of at least 50 yards in the final minute of regulation or overtime in NFL history. He also became the oldest player to make at least two field goals of 50 or more yards in a single game.

Tampa Bay coach Bruce Arians was upset with losing a TD with 3:41 left in a 27-23 loss at Tennessee after linebacker Devin White stopped Brett Kern short on a fake punt, knocking the ball out. Andrew Adams grabbed the ball and ran toward the end zone only to be whistled dead. Referee Adrian Hill told a pool reporter Kern was ruled down by contact, which is why the whistle was blown. Officials saw the ball come out after the whistle blew with the only reviewable part of the play if the runner was down by contact. Even if reviewed, Hill said the Bucs only could've been given the ball at the spot where Adams recovered.

The 49ers made a trade earlier in the week to acquire Emmanuel Sanders from Denver and it paid off almost immediately in San Francisco's 51-13 rout of Carolina. Sanders caught two passes on the opening drive, including a 4-yard TD from Jimmy Garoppolo . He finished with four catches for 25 yards. "It was probably one of the easiest touchdowns I have had," Sanders said. "It was awesome to get on the opening drive to be a newcomer on this team and be able to open up like that is awesome."

Houston defensive end J.J. Watt's suffered a season-ending pectoral injury in a win over Oakland. The three-time NFL Defensive Player of the Year went to the locker room with about 5½ minutes left in the second quarter after spending a few minutes in the medical tent. He had three tackles, including one for a loss, and swatted down a pass before he was injured. ... Arizona lost running back Chase Edmonds to a hamstring injury in the second half of its 31-9 loss at New Orleans. ... Seattle center Justin Britt suffered a knee injury against Atlanta. Coach Pete Carroll said after the game that Britt may have torn his ACL. ... The Los Angeles Rams lost wide receiver Brandin Cooks to a concussion against Cincinnati.

"I definitely had some butterflies, maybe a little more than usual. A lot of it was just excitement. And then as game time approached, that just turned into gratitude — just grateful for the opportunity to get back out there again. I'm grateful for this team. I'm grateful for just this moment." — New Orleans quarterback Drew Brees after returning from thumb surgery that sidelined him for five weeks and leading the Saints to a 31-9 win over Arizona.