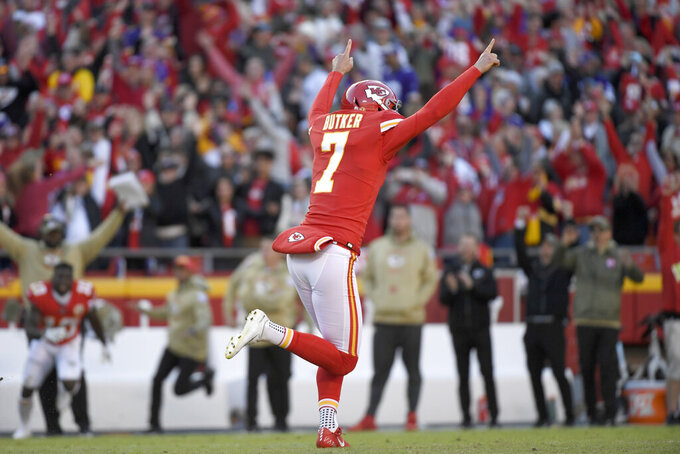 Dallas at New York Giants, 8:15 p.m. EST. The NFC East rivals meet for the second time this season, this time in front of a Monday night audience. The Cowboys (4-3) have won five straight against the Giants, and quarterback Dak Prescott and Dallas' No. 1 overall offense take on New York's 28th-ranked defense. Daniel Jones and the Giants (2-6) have lost four in a row overall and been outscored 38-0 in the first quarter during their skid.

— Russell Wilson, Seahawks, hit Jacob Hollister for a 10-yard touchdown on the opening possession of overtime — his fifth TD toss of the game — lifting Seattle past Tampa Bay 40-34.

— Ryan Fitzpatrick, Dolphins, completed 24 of 36 passes for 288 yards and three touchdown passes, two to rookie Preston Williams, and Miami got its first win of the season with a 26-18 victory over the New York Jets.

— Lamar Jackson, Ravens, was 17 of 23 for 163 yards and a touchdown and ran for 61 yards and two scores to lift Baltimore to a 37-20 win over previously undefeated New England.

— Matt Moore, Chiefs, started his second straight game in the injured Patrick Mahomes' place and threw for 275 yards and a touchdown without a pick in Kansas City's 26-23 win over Minnesota.

— Matthew Stafford, Lions, threw for 406 yards and three touchdowns in a losing cause as Detroit fell 31-24 at Oakland.

— Christian McCaffrey, Panthers, had 166 yards from scrimmage and scored three touchdowns — two rushing and one catch — to lead Carolina to a 30-20 victory over Tennessee.

— Jaylen Samuels, Steelers, had 13 catches out of the backfield for 73 yards in Pittsburgh's 26-24 win over Indianapolis.

— Harrison Butker, Chiefs, matched a career best with a 54-yard field goal to tie the game late in the fourth quarter and then drilled a 44-yarder as time expired to give Kansas City a 26-23 victory over Minnesota.

— Minkah Fitzpatrick, Steelers, returned an interception 96 yards for a score in Pittsburgh's 26-24 win over Indianapolis.

— Karl Joseph, Raiders, broke up a fourth-down pass in the end zone with 3 seconds left to give Oakland a 31-24 victory over Detroit.

— Marlon Humphrey, Ravens, returned a fumble 70 yards for a touchdown after Patrick Onwuasor stripped the ball from Julian Edelman's hands in Baltimore's 37-20 win over New England.

— Brennan Scarlett, Texans, had two sacks in Houston's 26-3 win over Jacksonville in London.

— Justin Houston, Colts, had a sack, safety, forced fumble and recovery in Indianapolis' 26-24 loss at Pittsburgh.

Indianapolis' Brian Hoyer became the fifth player in NFL history to throw a TD pass with seven or more teams. He has accomplished the feat with New England, Arizona, Cleveland, Houston, Chicago, San Francisco and Indy. Hoyer joins Vinny Testaverde, Chris Chandler and Gus Frerotte (seven teams each) and Ryan Fitzpatrick (eight teams). ... Oakland's Josh Jacobs ran for 120 yards and two TDs in the Raiders' 31-24 victory over Detroit and broke Marcus Allen's franchise rookie rushing record. Jacobs has 740 yards rushing through eight games, breaking the mark of 697 set by Allen in the nine-game, strike-shortened 1982 season. ... Pittsburgh's JuJu Smith-Schuster had three receptions, including his 200th career catch, in the Steelers' 26-24 win over Indianapolis. At 22 years and 346 days old, Smith-Schuster is the first player to record 200 catches before his 23rd birthday. The previous youngest player to reach the mark was Brandin Cooks, who did it at 23 years and 77 days old.

Miami's 26-18 win over the New York Jets was the Dolphins' first victory since the "Miami Miracle" over New England last season — which was followed by three straight losses to end 2018, making this a 10-game losing streak in all. ... The Dolphins led for the final 36 minutes, 14 seconds against the Jets. Entering Sunday, they had led for a total of 3 minutes, 46 seconds in their first four home games of 2019 combined. ... Buffalo's Josh Allen is the fourth quarterback to record at least 20 TD passes and 12 TD runs in his first two seasons, joining Steve Grogan (29 passing, 15 rushing), Cam Newton (40 passing, 22 rushing) and Dak Prescott (45 passing, 12 rushing). ... Seattle's Chris Carson rushed for 105 yards in the Seahawks' 40-34 overtime win over Tampa Bay, becoming the first running back this year to top 100 yards against the Buccaneers' league-best run defense. ... New England's 13-game winning streak, dating to last season and including the playoffs, ended with a 37-20 loss at Baltimore. ... The Ravens' 37 points were the most allowed by the Patriots in a road game since Week 4 of 2014, when New England lost 41-14 at Kansas City.

Both the New York Jets and Miami had a safety in the Dolphins' 26-18 win, marking the first time since the Cardinals and Oilers pulled off the feat in Week 14 of the 1994 season. Arizona beat Houston 30-12 in that one.

Not counting the London game won by "visiting" Houston over "home" Jacksonville, home teams went 11-0 on Sunday. That ties the best record by home teams in non-neutral site games, according to STATS, when they also went 11-0 on Nov. 27, 1983, and Oct. 18, 1998. This week also marked just the third time in the past 20 seasons that every game played at 1 p.m. Eastern was won by the home team. Miami, Buffalo, Carolina, Kansas City, Philadelphia and Pittsburgh were all winners. The previous times early game home teams swept were Week 15 in 2003 and Week 5 in 2018.

Denver's Brandon Allen, Buffalo's Josh Allen and Carolina's Kyle Allen all led their teams to victories Sunday, marking the first time in the Super Bowl era that three quarterbacks with the same surname all started and won in the same week.

The Broncos topped Cleveland 24-19, the Bills defeated Washington 24-9 and the Panthers beat Tennessee 30-20.

Washington's Brad Johnson, Atlanta's Doug Johnson and Buffalo's Rob Johnson all started and lost in Week 14 of the 2000 season.

Minkah Fitzpatrick returned an interception 96 yards for a score in Pittsburgh's 26-24 win over Indianapolis, his fourth interception of the season and third in a span of six days. Fitzpatrick, acquired from Miami in September for a 2020 first-round pick, had the second-longest interception returned for a TD in the regular season in franchise history behind Martin Kottler's 99-yard return against the Chicago Cardinals in 1933, back when the Steelers were known as the Pirates.

Derek Carr threw a 9-yard touchdown pass to rookie Hunter Renfrow with 2:04 remaining and Karl Joseph broke up a fourth-down pass in the end zone with 3 seconds left to give the Raiders a 31-24 victory over the Detroit Lions in their first game back in Oakland in seven weeks. After surviving an odyssey that forced them to travel about 20,000 miles for four road games and a neutral site game in London, the Raiders (4-4) came back home for the first time since losing to Kansas City on Sept. 15.

Harrison Butker kicked a tying 54-yard field goal with 2:30 remaining and then booted a game-winning 44-yarder as time expired to give Kansas City a 26-23 win over Minnesota. Butker became the first player since Tampa Bay's Martin Gramatica in 2002 to make a tying field goal of at least 50 yards and a field goal of at least 40 yards to put his team ahead for good — with both kicks coming in the final three minutes of the fourth quarter.

Indianapolis quarterback Jacoby Brissett hurt his left knee in Indianapolis' loss to Pittsburgh. Brissett, who took over after Andrew Luck's surprise retirement during the preseason, went down in the second quarter after one of his offensive linemen fell on him as he stood in the pocket. Coach Frank Reich described the injury as a sprain, and Brissett's status for next week's game against Miami is uncertain. The Colts also lost center Ryan Kelly in the first quarter with what the team called a "burner." ... Minnesota wide receiver Adam Thielen aggravated a hamstring injury early in the Vikings' loss to Kansas City. ... Philadelphia's DeSean Jackson lasted just one series in the Eagles' win over Chicago, his first action since suffering an abdominal injury in Week 2. He drew a pass interference penalty on the first play of the game and had one catch for 5 yards before he left. Coach Doug Pederson said Jackson was held out for precautionary reasons and will undergo more testing this week.

"I'm done apologizing for wins. I'm not too worried about the strength of schedule or anything like that. It starts with each and every week getting a win and we got that this week." — Buffalo safety Micah Hyde after the Bills improved to 6-2 with a 24-9 win over Washington. The Bills' six wins have come against teams that entered this weekend with a combined 7-31 record.

"It's good to be sitting at 4-4. I never thought I'd hear myself say that." — Pittsburgh coach Mike Tomlin after the Steelers held on to beat the Indianapolis Colts 26-24.