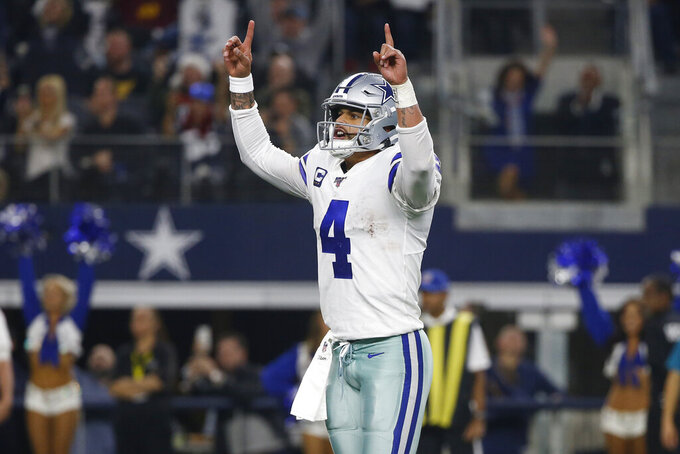 Dallas Cowboys quarterback Dak Prescott (4) celebrates after making a touchdown throw against the Washington Redskins during the second half of an NFL football game in Arlington, Texas, Sunday, Dec. 15, 2019. Prescott connected with wide receiver Michael Gallup for the touchdown. (AP Photo/Ron Jenkins)

The NFL goes into the playoffs with its regular-season ratings having gone up for the second straight year, the first time the league has seen back-to-back increases since 2010.

The league’s 100th season was its most viewed in four years as games averaged 16.5 million viewers on television. That is a 5% increase over 2018, according to Nielsen.

Neal Pilson, the former president of CBS Sports who now runs his own sports television consulting company, attributes the continued increases to the emergence of younger players as well as the league becoming year-around programming.

“The league is quite fortunate with young players who have had tremendous publicity in college doing quite well. They’ve also had some good games and have largely avoided off-field controversy,” he said. “The NFL has also learned from the NBA’s playbook of staying on the sports page and being relevant during the offseason with the combine and draft keeping them on the front pages for several months.”

The NFL said in a release that female viewers were up 5% over last season and that women have accounted for at least 35% of the audience for each of the past three years.

Digital streaming continues to see significant gains with a 51% jump. The league reported an average of 487,000 online viewers via different packages.

One constant is that Dallas continues to be a big draw. The Cowboys had three of the five most-watched games and they had the top game on every package except “Monday Night Football.”

Dallas’ Thanksgiving Day game against Buffalo on CBS was the top game at 32.6 million.

ESPN’s “Monday Night Football” once again saw the biggest gains with an 8% increase for the second straight year. The 17-game package over 16 weeks averaged 12.57 million viewers.

Fox Sports – which has this year’s Super Bowl -- averaged 19.24 million viewers for its Sunday games, a 7% increase. The “America’s Game of the Week” continues to be the top window, averaging 24.36 million. Fox had this season’s most watched Sunday afternoon game as the Nov. 24 matchup between Dallas and New England drew 29.9 million.

NBC’s “Sunday Night Football” had its best season since 2015, averaging 20.5 million (5% increase). The Sept. 29 game between Dallas and New Orleans led the way at 24.2 million. Last week’s matchup between San Francisco and Seattle averaged 22.8 million, making it the most viewed game in the package’s 14-year history between a pair of West Coast teams.

The league’s packages don’t begin to expire until after the 2021 season, but negotiations on extensions with all of the league's broadcast partners could begin soon.

“The NFL continues to be the Tiffany of sports programming. It is such an important property for the networks and carriers that the competition will be just as strong even if the ratings were flat,” Pilson said. “The major sports properties have become even more efficient in delivering audiences to advertisers. More efficient is more valuable.”