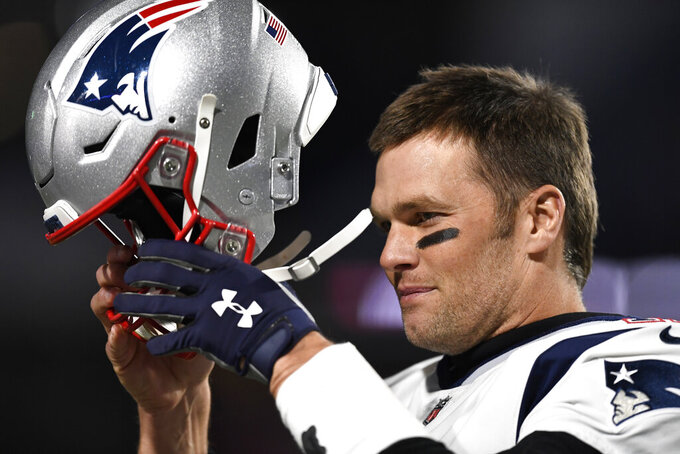 FILE - In this Oct. 29, 2018, file photo, New England Patriots quarterback Tom Brady puts on his helmet for warmups prior to an NFL football game against the Buffalo Bills, in Orchard Park, N.Y. Improvements that an NFL and NFLPA study found in helmets didn't help Tom Brady. The six-time Super Bowl champion quarterback will have to discard his longtime brand as one of 11 helmets banned by the league and players' union for 2019. Brady was one of 32 players wearing helmets last season under a grace period that is now eliminated.(AP Photo/Adrian Kraus, File)

The six-time Super Bowl champion quarterback will have to discard his longtime brand as one of 11 helmets banned by the league and players' union for 2019.

Brady was one of 32 players wearing helmets last season under a grace period that is now eliminated.

"If they were, at the end of the 2017 season, using prohibited helmeted, they could be grandfathered for 2018," said Dr. Kristy Arbogast, the union's appointed consultant to the testing.

"At end of 2018, we had those relatively few players, 32, who were wearing a red category model. It is now prohibited. Conversations are being held with those players. We tried to identify for every helmet in the red category a similar helmet, often from the same manufacturer, that had similar look and feel and is not prohibited."

In its annual study, designed by NFL- and NFLPA-appointed biomechanical engineers, a subset of concussion-causing impacts sustained by NFL players during games is simulated to determine which helmets best reduced head impact severity. The study measures rotational velocity and acceleration to evaluate helmets.

A poster both sides released Friday will be displayed at every team facility. It shows six of 11 helmets tested this year moved into the top-10 rated models.

VICIS Zero1 graded best for the third straight year. Of the 34 overall helmets on the poster, it was followed by the Schutt F7 LTD and the Riddell SpeedFlex Precision Diamond.

Also in the "green area" of strongly approved helmets was the brand new Xenith Shadow. In all, those four manufacturers had all 27 models at the top of the poster.

The yellow section, in which helmets perform worse than the green group, had seven models.

"The thing that's really notable," Arbogast said, "is how receptive the players were to that info; 50% moved up the poster. They are eager to have the information that helps them make informed decisions about their equipment choice."

Arbogast commended manufacturers for "innovating and introducing new helmets; the fact all new ones performed well is very encouraging."

The poster includes gray areas within the green and yellow sectors. That indicates that less than 1% of NFL players are wearing that model, providing players with additional information. But Arbogast stresses that "doesn't mean they aren't safe or viable options."

The 11 models in the red area, including Brady's, are banned.

"My experience wearing the Zero1 has been exceptional," Wilson said. "The custom fit and wide field of vision have allowed me to perform at my best."

VICIS has tweaked the helmet, reducing weight and cost while keeping the fundamental design.

"The helmet's deformable shell and unique ... layer have been shown to reduce impact forces more effectively than other helmets," said Dave Marver, the company's CEO.

"The NFL/NFLPA test ranks helmets using a sophisticated formula that considers several different impact velocities and locations, and the measurement of both linear and rotational forces. The Zero1 is top-ranked when taking all of those measurements into account, meaning it provides the best protection across the full range of impacts and situations players encounter in NFL play."

One potential concern in the study is that manufacturers could design helmets to rate highly, but they might not necessarily be the best performers on the field.

Dr. Grant Goulet, vice president of product innovation at Xenith — which had five models in the green category — noted that "these independent tests, whether by the NFL and NFLPA or by Virginia Tech ... are incredibly important and providing value in this space."

"We are very supportive and encouraged by the work the NFL and NFLPA are putting into this test, it's scientifically rigorous," Goulet added. "However, it could also be something of a cautionary tale that more helmets moved into that green group. I think there could be a propensity to be engineering helmets for these tests and metrics and that's what is bumping them up into this green group.

"What is important to emphasize is more of a holistic approach to designing the best gear for the athlete on the field."

That, naturally, is what the entire process is about.

"The importance is this is a statistical analysis of on-field performances," said Dr. Jeffrey Crandall, the league's consultant to the independent testing. "What we see is statistically is double-digit concussion risk deduction as we go from yellow to green and from red to yellow. That has a significant impact on the risk of concussion."