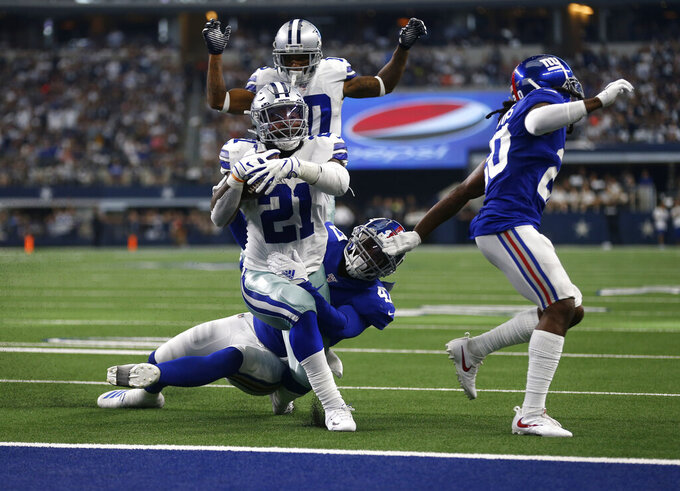 Dallas Cowboys running back Ezekiel Elliott (21) runs the ball for a touchdown after getting past New York Giants outside linebacker Alec Ogletree, center bottom, and Janoris Jenkins, right, as wide receiver Tavon Austin, rear, looks on in the second half of a NFL football game in Arlington, Texas, Sunday, Sept. 8, 2019. (AP Photo/Ron Jenkins)

The NFL's opening weekend to its 100th season delivered strong ratings for all games.

The league and Nielsen said Wednesday there was an average of 17.1 million viewers for games, which is a 5% increase over last year.

The New York Giants game against the Dallas Cowboys on Fox averaged 23.9 million, making it the network's most-watched opener since 2016.

NBC's "Sunday Night Football" — Pittsburgh Steelers at New England Patriots — as well as the Sept. 5 kickoff game between the Green Bay Packers and Chicago Bears each averaged 22.2 million. This is the first time both network games on opening weekend posted increases since 2015.

ESPN's "Monday Night Football" doubleheader was the most watched in four years. The early game between the Houston Texans and New Orleans Saints was the most-watched program on cable Monday (13 million) while the Denver Broncos-Oakland Raiders game was second (10.6 million).