NFL This Week: 49ers-Packers square off to highlight Week 12 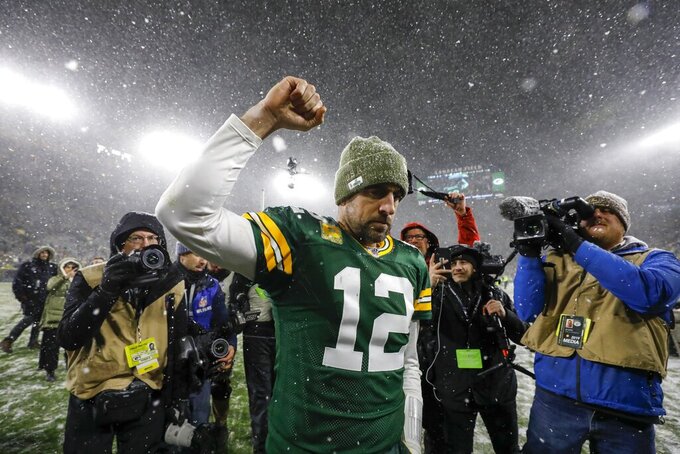 Jimmy Garoppolo and the San Francisco 49ers refuse to look too far ahead on their schedule. Especially this week while staring at a showdown with Aaron Rodgers and the Green Bay Packers.

The thing is, though, this matchup could go a long way in helping determine the teams’ seeding when the playoffs start. So, this one Sunday night at Levi’s Stadium will have a bit of a postseason feel for both the 49ers (9-1) and Packers (8-2).

“With the (49ers) faithful and everything, having them helping out the defense and just getting the place rocking will be huge,” Garoppolo said. “The louder they can be, the better. But, yeah, it'll be a big game Sunday.

“This is a great opportunity, great challenge for us."

It’s also the highlight of a Week 12 slate of games on the NFL schedule.

San Francisco begins a three-game stretch against teams currently in first place — and all with 8-2 records — including Green Bay, Baltimore and New Orleans.

“I don't even think about playoff seeding right now,” 49ers coach Kyle Shanahan said. “Our goal is to get in the playoffs. We're all right there. There's still a lot of football left. Each game we win, we've got a better chance at getting in there. You don't think about seeds, at least I don't, until you can narrow it down to one or two games. I think we're far from that right now.”

The 49ers showed some resilience last week, rallying from 16 points down to beat Arizona for the team's biggest regular-season comeback since 2011.

Meanwhile, the Packers are coming off a 24-16 victory over Carolina at home, giving them five wins in their past six games.

“We’ve been finding a way to win, different ways,” Rodgers said. “I think great teams understand their roles and embrace them and make it more about the team.”

And, Green Bay is no stranger to playing in front of big TV audiences: The Packers are 3-1 in prime-time games this season.

Deshaun Watson threw two touchdown passes to DeAndre Hopkins and finished with 298 yards to help the Texans take the AFC South lead. Houston (7-4) rebounded from a 41-7 loss to Baltimore on Sunday. The Colts dropped to 6-5.

Lamar Jackson and the Ravens play in LA on Monday night on a six-game winning streak, the longest active run in the NFL and the team’s best since 2000 — when they won Super Bowl. Baltimore has done it mostly in dominant fashion, too, having won four in a row by 14 points or more.

Jared Goff and the Rams have won three of four to stay in the NFC playoff race. Los Angeles will also see a familiar face: Ravens cornerback Marcus Peters was acquired in a trade with the Rams on Oct. 15 and has returned two interceptions for touchdowns while with Baltimore.

The Cowboys have the NFL’s top-ranked offense, and the Patriots are ranked No. 1 in defense.

So, something’s got to give, right?

Dallas’ Dak Prescott leads the league with 322.1 passing yards per game and is on pace to be the first Cowboys QB to top the NFL in yards passing for a full season. He also has 38 wins since entering the NFL in 2016, second most in the league during that span behind — yep, you guessed it: the Patriots’ Tom Brady.

With a win Sunday, New England would extend its streak to 17 consecutive seasons with at least 10 wins — which would be an NFL record.

This matchup is highlighted by streaking quarterbacks, with the Seahawks’ Russell Wilson and Eagles’ Carson Wentz each having thrown at least one touchdown pass in 13 consecutive regular-season games, the longest active run in the NFL.

Wilson is looking to improve to 4-0 in his career against the Eagles. And, Seattle has been terrific on the road, going 5-0 so far away from home.

Wentz and the Eagles are struggling on offense right now and are coming off a 17-10 loss to New England last week.

Christian McCaffrey has been a huge bright spot in what has been an up-and-down season in Carolina. The Panthers running back is the first NFL player with at least 1,000 yards rushing and 500 yards receiving in his team’s first 10 games of season. He has also eclipsed 140 scrimmage yards in each of past four games — although Carolina is 1-3 in those.

New Orleans also has a record-breaking star on offense in wide receiver Michael Thomas, who leads the league with 94 receptions, the most by a player in the first 10 games of a season in NFL history. He’s also the first player with 90-plus receptions in each of his first four seasons.

The Jaguars are looking to sweep the Titans for the first time since 2005 after Jacksonville made things miserable for then-Tennessee quarterback Marcus Mariota, who was sacked nine times in the 20-7 loss in Week 3.

Ryan Tannehill is under center this time around for the Titans and has three-game winning drives in four starts. He has also been solid at home, where he has a 100 or higher passer rating in three games.

Nick Foles is Jacksonville’s quarterback for this meeting after Gardner Minshew played in his place while he sat out because of injury. Foles threw for 296 yards and two TDs with one interception in a 33-13 loss to Indianapolis, his first start since the opener.

The Bills are off to their best start after 10 games in 20 years, and the play of Josh Allen has been a big reason.

Buffalo’s second-year quarterback earned AFC offensive player of week honors after going 21 of 33 for 256 yards and three touchdowns passing and one rushing in a 37-20 win over Miami. Allen also has 163 pass attempts without an interception, dating to a 14-7 win at Tennessee in Week 6.

The Broncos have been deadly — to themselves — late in games, having squandered four fourth-quarter leads. The latest was a doozy as Denver became the first team in five years to blow a 20-point first-half lead in a 27-23 loss to Minnesota last Sunday. It all has John Elway’s Broncos in jeopardy of a second 3-8 record in three years.

The Falcons have won the past five meetings between the NFC South rivals, with the Buccaneers’ previous victory coming over three years ago.

Atlanta enters this matchup having won two in a row overall after starting the season 1-7. Meanwhile, Tampa Bay has lost five of its past six. What does it all mean? Well, the loser in this one will fall into sole possession of last place in the division.

Buccaneers quarterback Jameis Winston leads the NFL with 22 turnovers, including a league-high 18 interceptions. He’ll face a Falcons defense that had four interceptions in a win over Carolina.

The Raiders are coming off having swept a three-game homestand for the first time since 1980. Now, they hit the road, where they’re 1-3 this season.

Oakland rookie running back Josh Jacobs has three 100-yard performances and ranks fourth in the NFL in rushing with 923 yards. He’ll face a tough test in this one against a Jets defense that is allowing a league-low 79.1 yards rushing per game.

Sam Darnold and the Jets have won two in a row, coming against the lowly Giants and Redskins. Now, New York looks to win three straight for the first time since Weeks 3-5 of the 2017 season — yes, over two years ago.

Both teams welcome playing a game after a turbulent week for each.

The Dolphins released suspended running back Mark Walton after his arrest on charges of punching his pregnant girlfriend. Meanwhile, the Browns are dealing with the fallout from Myles Garrett’s suspension for clobbering Pittsburgh’s Mason Rudolph with the quarterback’s helmet.

Miami had its two-game winning streak end last week against Buffalo, and has been outscored by a league-worst 166 points while ranking last in turnover differential (minus-13) and takeaways (seven).

Cleveland is creeping back toward the playoff picture after a slow start with two straight home wins. The Browns have helped themselves by not committing a turnover in their past three games.

The Giants come off their bye-week break having dropped six straight and would clinch a third losing season in row with a loss.

Saquon Barkley has struggled since returning from a high ankle sprain more than a month ago. Barkley has carried 64 times for 165 yards, an average of 2.57 yards, in four games against Arizona, Detroit, Dallas and the Jets — against whom he gained a career-worst 1 yard on 13 carries.

Chicago has lost five of six, despite holding opponents under 20 points in three of the past four games. The problem has been on offense as the Bears rank 28th in scoring and 27th in touchdowns.

The Lions have dropped three in row for the third time under second-year coach Matt Patricia.

It appears Detroit might have to try to snap the skid without quarterback Matthew Stafford, who’s expected to miss his third consecutive game with a back injury. So, it’s up to Jeff Driskel, who has three touchdowns and one interception this season in Stafford’s place.

The Redskins have lost four in a row overall, and nine straight at home, dating to last season. Rookie quarterback Dwayne Haskins, sacked six times last week against the Jets, is expected to make his third NFL start.

The Steelers will be short-handed in this one as they’ll be without center Maurkice Pouncey, who’s serving a suspension for his role in the brawl at the end of Pittsburgh’s loss to Cleveland last week. Injured running back James Conner (shoulder) and wide receiver JuJu Smith-Schuster (concussion/knee) are also expected to miss the game.

Oh, and there’s also the fact the Bengals are the only winless team in the NFL and have matched the worst start in club history and its longest losing streak.