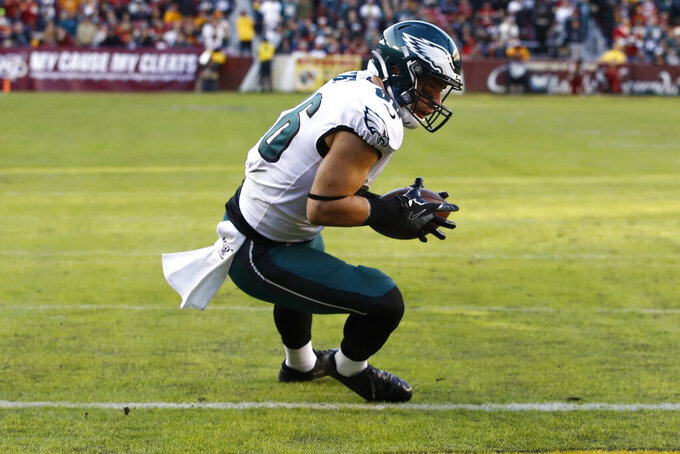 Philadelphia Eagles tight end Zach Ertz (86) scores a touchdown against the Washington Redskins in the second half of an NFL football game, Sunday, Dec. 15, 2019, in Landover, Md. (AP Photo/Patrick Semansky)

Complaints about the NFL's playoff structure have rarely carried more clout than down the stretch of this season, given the glaring weakness of the NFC East.

Though there are currently no teams in this quagmire of a quartet with a winning record, yes, either Dallas or Philadelphia will still get to host a first-round game against a wild-card team already guaranteed to have a better record. The difference could be by as many as four games.

Neither the Cowboys (7-7) nor the Eagles (7-7) are concerned about the imbalance, of course. They're simply aiming to close the year strong after so many puzzling struggles. They'll play in Philadelphia on Sunday afternoon, one of the most meaningful games on the Week 16 schedule even if this is hardly a matchup of Super Bowl-caliber competitors.

The Cowboys, who started the season 3-0, beat the Los Angeles Rams 44-21 last week for a badly needed spark. The Eagles, who recovered from a 37-10 loss at Dallas on Oct. 20 to improve to 5-4 entering their bye, beat Washington 37-27 last week to keep pace.

The Cowboys can clinch the division with a win. The Eagles need two more victories to claim their spot, with their final game at the New York Giants. Dallas wraps up 2019 against the Redskins. Assuming no ties, then, the NFC East will finish with a total of 24 wins. Last season, the only one of the NFL's eight divisions with fewer than 30 victories was the AFC East with 28. Houston, which went 9-7 in 2016, was the last team to win a division with nine wins or fewer.

Denver coach Vic Fangio went so far last week as to informally present to reporters his preferred format, which would eliminate divisions altogether and have each team play every other conference opponent on an annual basis to ensure the top six squads from each side qualify for the playoffs.

That's just one man's outside-the-box idea for enacting change, though. The Cowboys and Eagles are both still fully entitled to the division championship that almost every team states as a goal when training camps convene in the summer.

Week 16 started with three games on Saturday. In Tampa, Florida, Bradley Roby returned one of Jameis Winston’s four interceptions for a touchdown and Ka’imi Fairburn snapped a fourth-quarter tie with his third field goal, lifting the Houston Texans to a 23-20 victory over the Tampa Bay Buccaneers and their fourth AFC South title in five years.

Roby raced 27 yards up the right sideline after picking off Winston’s first pass of the game, the sixth pick-6 the Bucs quarterback has thrown this season. Jahleel Addae’s interception with 1:27 remaining, ended any realistic chance the Bucs had of fully overcoming Winston’s mistakes.

The Texans (10-5) won despite not getting an especially sharp performance from Deshaun Watson, who completed 19 of 32 passes for 184 yards and one interception. The Bucs (7-8) sacked him five times and held Houston to one offensive TD on Carlos Hyde’s 1-yard run in the second quarter.

The Texans ended Tampa Bay's four-game winning streak and are AFC South champions for the second straight year. They join the Patriots and Chiefs as the only teams with four division titles since 2015.

In Foxborough, Massachusetts, Tom Brady passed for 271 yards and a touchdown, sneaked for a third-down conversion to set up another score and threw a downfield block on another scoring drive to help the New England Patriots clinch their 11th AFC East title in a row by beating Buffalo 24-17.

With Bills visiting for a rare late-season matchup while the division was still at stake, Sony Michel ran for 96 yards and Rex Burkhead rebounded for an opening-drive fumble to catch four passes for 77 yards and run for 20 more. Both teams had already clinched playoff berths; the Patriots (12-3) remain in contention for a first-round bye or even the No. 1 seed in the AFC.

Josh Allen completed 13 of 26 passes for 208 yards and ran for 43 more, including a first down on fourth-and-1 from the Patriots 30 with about three minutes left. After driving to the New England 8, Allen over threw Dawson Knox in the end zone and then was sacked by Adam Butler. Facing fourth-and-goal from the 15 with just over one minute left, he was forced out of the pocket and had to throw the ball up for grabs in the end zone, where it was knocked down by J.C. Jackson.

Cole Beasley caught seven passes for 108 yards, and John Brown had a 53-yard touchdown reception for the Bills (10-5), who have qualified for the playoffs for the second time since 1999.

And in Santa Clara, California, Jimmy Garoppolo converted a pair of conversions on third-and-16 to set up Robbie Gould's game-winning 33-yard field goal with no time left and the San Francisco 49ers eliminated the defending NFC champion Los Angeles Rams from playoff contention with a 34-31 victory.

Garoppolo made up for a mostly pedestrian game for the 49ers (12-3) by delivering two big throws on the final drive after taking his fifth and sixth sacks.

He found Kendrick Bourne on an 18-yard pass over the middle to convert the first long third down and then hit Emmanuel Sanders behind a blown coverage for 46 yards to set up the winning kick.

The Niners then ran out on the field to celebrate while the Rams (8-7) were eliminated with the loss. Minnesota became the fifth team to clinch a berth in the NFC with Dallas and Philadelphia battling for the final spot.

The victory kept the Niners in control in the race for the NFC's top seed and home-field advantage throughout. They still need to win next week at Seattle to win the NFC West, otherwise they will be relegated to wild-card status.

Garoppolo finished 16 for 27 for 248 yards with one touchdown and two interceptions.

Here's a closer look at the other games this weekend:

The 2019 highlight film for the Falcons will start and end with road wins over NFC powers New Orleans and San Francisco, because the rest of the story has been about the continued steady decline for the 2016 NFC champions who were oh, so close to beating the Patriots in the Super Bowl that year. They'll finish with their second straight losing record. Matt Ryan needs 231 passing yards to hit the 4,000-yard mark for a ninth straight time.

This is one of four games out of 11 contests on Sunday afternoon pitting two teams eliminated from the postseason race, playing only for pride, development and, naturally, draft pick positioning. The Jaguars are 10-20 since losing the AFC championship game at New England after the 2017 season.

Baltimore can clinch home-field advantage throughout the AFC playoffs by beating the Browns, with a second straight AFC North title already secured. Lamar Jackson can pad his MVP credentials, already leading the NFL with 33 touchdown passes and owning the single-season quarterback record with 1,103 rushing yards.

The Ravens can also exact some revenge for their 40-25 loss at home on Sept. 29 to Cleveland. The Browns have not done much well at all since that eye-raising performance, though they remain mathematically alive for a wild-card spot.

With the NFL career record for touchdown passes in hand for now, Drew Brees has the NFC South champion Saints in position to do some damage in January and return to the Super Bowl for the first time in 10 years. They'll need some help to secure a first-round bye, though, and road games at Tennessee and Carolina await. The Saints are one of four 11-3 teams in the NFC, marking this just the second time since the 16-game schedule was initiated in 1978 that four NFC teams were tied for the top record with two or fewer weeks remaining.

The Titans squandered their inside track to the AFC South title, now needing the Buccaneers to beat Houston before they can be concerned about the Week 17 rematch with the Texans. There's a wild-card spot well within reach, though, with Pittsburgh the primary competitor and both teams sporting the same record. Titans quarterback Ryan Tannehill, who has quietly been one of the league's best comeback performers, trails only Brees for the NFL's best passer rating and completion percentage.

The Colts are left with only long-shot scenarios for returning to the playoffs, having dropped four straight games. The greatest intrigue in this contest, then, is which team can end a long losing streak. The Panthers have the longest current skid in the league with six consecutive defeats. They're expected to give rookie quarterback Will Grier his first start.

Being a Bengals fan has been a hobby of infrequent reward, but this weekend could bring one of them. Losing to the Dolphins would ensure the Bengals have the first overall draft pick in 2020, a useful first step toward rebuilding the franchise. The Dolphins will be somewhere right behind them on the board on April 23. Hey, they're favored to win this one, the first time oddsmakers have sided with them all season.

The Steelers can continue their remarkable resilience since losing quarterback Ben Roethlisberger and enduring so many other setbacks by securing a wild-card spot with wins in their final two games. Their primary competitor is the Titans, who entered Week 16 with the same record.

The running back on the other side will look awfully familiar, with Le'Veon Bell facing his former team for the first time. The three-time Pro Bowl pick, who sat out the 2018 season in a contract dispute, has an average of 3.3 yards per rush that is the lowest of his six-season career.

This game will play a significant role in the order of the top five spots in the draft next spring. Neither team will likely use that pick on a quarterback, because they did that in 2019. Daniel Jones has missed the past two games with an ankle injury but could return for the Giants. Dwayne Haskins had his best game as a pro last week for the Redskins in a loss to the Eagles.

The Lions have lost seven straight games. The Broncos have ensured their third consecutive losing season, their first such streak since 1972. One reason to watch? Budding stars at wide receiver for each team. Detroit's Kenny Golladay leads the NFL with 10 touchdown catches. Denver's Courtland Sutton has set career highs in yards and touchdowns.

The soccer venue the Chargers have used since moving to the Los Angeles area in 2017 will be used for the final time, with the club set to move into the most expensive stadium in NFL history with the Rams next fall. The Raiders have lost four straight games to all but ruin their playoff bid, though they remain mathematically alive for a wild-card spot. The Chargers have lost four of their past five games.

The Seahawks have their sights set on home-field advantage throughout the NFC playoffs, though they must beat the 49ers in Week 17 to secure that.

The Cardinals have actually won three of their past four games at deafening CenturyLink Field, so the Seahawks sure won't take this one lightly. They have won 10 games by one score this season, becoming the first team since the Houston Oilers in 1978 to do so.

Though their fourth straight AFC West title has already been clinched, Patrick Mahomes and the Chiefs have only an outside chance to get a first-round bye. They've won four consecutive games behind a vastly improved defense, with an average of 11.3 points allowed.

The Bears will miss the playoffs, an obvious disappointment after winning their division last year. Coach Matt Nagy, after going 12-4 in his rookie season, will face his longtime mentor, Chiefs coach Andy Reid.

The NFC North is undecided, with the Packers poised to win it in coach Matt LaFleur's rookie year. They can lose to the Vikings on Monday night and still do so, as long as they beat the sputtering Lions on the road in Week 17.

The Vikings have never lost to the Packers at U.S. Bank Stadium, which opened in 2016.