NFL This Week: Round 1 of Texans-Titans' AFC South showdown 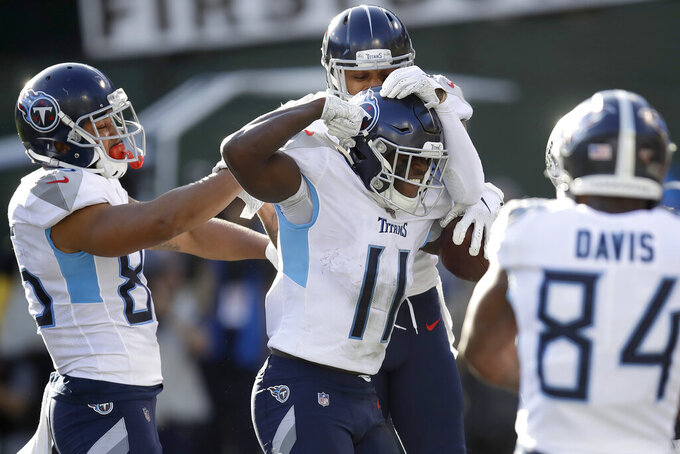 Tennessee Titans wide receiver A.J. Brown (11) is congratulated by teammates after scoring against the Oakland Raiders during the first half of an NFL football game in Oakland, Calif., Sunday, Dec. 8, 2019. (AP Photo/Ben Margot)

The Houston Texans have won the AFC South three times in coach Bill O'Brien's five seasons, and they have led or shared the divisional lead all but three weeks this season.

Adding a fourth title to that list means going through the franchise the Texans replaced in Houston.

The Tennessee Titans last won the AFC South in 2008 and haven't swept the Houston Texans since 2007. But the Titans and second-year coach Mike Vrabel, who got his NFL coaching start in Houston working with linebackers for O'Brien in 2014, has won four straight and six of seven since quarterback Marcus Mariota was benched for Ryan Tannehill.

That combination helped the Titans (8-5) climb from the bottom of the AFC South midway through the season into a tie with the Texans (8-5). Tennessee hosts Houston on Sunday in the first of two games between the rivals in the final three weeks of the schedule.

"The challenge is getting ready for them the first time," Titans coach Mike Vrabel said. "The second one is not going to mean a whole lot. We’ve got to get ready for the first one here."

Houston holds the No. 4 seed in the AFC thanks to a better record against conference teams than Tennessee. A sweep offers the Titans the safest bet to the division title and the franchise's first home playoff game since January 2009.

With Tannehill at quarterback, Tennessee is scoring 31.4 points a game — second in the NFL in that time only to Baltimore.

Lamar Jackson threw five touchdown passes, scurried into the NFL record book and guided the Ravens to their second straight AFC North title and 10th consecutive victory. Baltimore (12-2) took control with touchdowns on its first three possessions and Jackson made it 28-7 in the third quarter with a 24-yard scoring pass to rookie Marquise Brown following a turnover by New York (5-9).

Jackson ran for 86 yards (on eight carries) to break Michael Vick's single-season record for a quarterback. Jackson has 1,108 yards rushing. Vick had 1,039 for Atlanta in 2006. Jackson completed 15 of 23 passes for 212 yards and increased his NFL-leading total of touchdown passes to 33, tying the franchise season record set by Vinny Testaverde in 1996.

These teams currently hold the wild-card spots in the AFC, which helped this game move to prime time. Buffalo can clinch a playoff berth with a victory, while the Steelers are trying to stay ahead of the Titans. The Bills are 5-1 away from Buffalo this season, though it might be tougher for Bills Mafia to find their way into Heinz Field.

A big chunk of the reason the Steelers are in the playoff chase is how good they are at home, going 5-2. Pittsburgh also has won the last six in this series.

QB Devlin Hodges can make a bit of history by becoming the first undrafted rookie in the common draft era (since 1967) to win his first four starts.

The Patriots' two-game skid has delayed New England's annual clinching of its perfunctory playoff berth. Now the Pats go into Cincinnati as heavy favorites to both snap that rare losing string and secure that playoff berth with a victory.

Tom Brady needs three touchdown passes to tie Peyton Manning (539) for most in NFL history, which will be watched much more closely than anything happening on the Bengals' sideline. We think.

The Bears need a fourth straight win to keep their playoff hopes alive in the NFC, where the only teams without double-digit victories assured of reaching the postseason play in the NFC East.

But this time, Chicago is playing Green Bay, which can clinch an NFC playoff berth with a victory or a tie and a loss by the Rams. Aaron Rodgers has thrown 17 TD passes with only one interception in his past five games at home against Chicago.

The Seahawks can bounce back from their loss to the Rams and possibly clinch a playoff berth with three different scenarios. They also need a victory to keep a game back of San Francisco in the NFC West if the Niners win.

Cam Newton's recovering from foot surgery, and the Panthers have lost five straight. Christian McCaffrey has been very successful against the NFC West — not to mention the entire league — averaging 197.3 yards from scrimmage in his last four games against that division.

The Chiefs already have clinched their fourth straight AFC West title, and the biggest question for Kansas City is the health of Patrick Mahomes ' right hand. Kansas City has won eight straight in this series between the division rivals.

Rookie Drew Lock won't catch the Chiefs by surprise after he threw for 309 yards and three TDs last week in Denver's rout of Houston.

The Buccaneers are trying to finish the season strong in coach Bruce Arians' first year, and Jameis Winston is trying to prove he deserves a contract from someone this offseason. Not even a fracture in the thumb of his right, throwing hand is keeping Winston out of the lineup after he threw for a career-high 456 yards and four TDs last week.

Detroit rookie quarterback David Blough has to contend with Shaquil Barrett, the NFL's sacks leader with 15 this season. The Lions are trying to snap a six-game skid.

The Dolphins have to return to the same stadium where a rare pass interference penalty was called during review and helped cost them a one-point loss to the Jets last week.

This is a prime opportunity for the Giants to end a nine-game losing streak after falling in overtime to Philadelphia on Monday night. Another loss would mark the first 10-game skid in franchise history.

The Eagles have a short week and need blinders to focus only on the Redskins and not next week's home game against Dallas, which could decide the struggling NFC East. Philadelphia escaped against Washington 32-27 in September and can look at the Redskins' close loss at Lambeau Field to Green Bay last week as a reminder to stick to the task at hand.

This will be Washington rookie quarterback Dwayne Haskins' first career start against an NFC East opponent, and the Eagles have won the last five in this series.

A pair of rookie head coaches face off when Freddie Kitchens takes his Browns to visit Kliff Kingsbury in the desert. The Browns have won four of their last five to keep faint playoff hopes alive.

The final game at Oakland-Alameda County Coliseum, at least for the Raiders, who move to Las Vegas next season. The Raiders may have lost three straight, routed in each loss, but in the last game at the Black Hole, the Raiders will be determined to say goodbye in true Al Davis style by trying to just win.

The Jaguars have lost five straight, and not even the sequel of Minshew Mania has helped Jacksonville stop the struggles.

The Vikings are trying to hold off Los Angeles' other team, the Rams, for one of the NFC's wild-card berths. It should help that Kirk Cousins is at his best against teams from the AFC West, having thrown for 16 TDs and only two interceptions in his last seven against this division.

Chargers quarterback Philip Rivers needs 252 yards to give him seven straight seasons with 4,000 yards passing or more, the NFL's longest active streak. He threw for 314 last week in posting a career-high 154.4 passer rating.

The 49ers need a win to clinch a playoff berth after that big victory in New Orleans pushed them back atop the NFC in the chase for the No. 1 seed. They still can clinch if the Rams or both Minnesota and Green Bay lose.

The Falcons have won three of their last five, and Matt Ryan topped 50,000 yards passing for his career last week.

The Cowboys have lost three straight to turn their chase of the NFC East title into a game of survivor trying to stay ahead of Philadelphia. Being back home in Dallas couldn't hurt, but they're only 3-3 there this season.

The Rams are playing catch-up, trying to chase down Minnesota for the NFC's last wild-card spot after playing in the Super Bowl in February. It doesn't help that they visit San Francisco next week.

But the Rams have won two straight, with Todd Gurley totaling 110 yards or more from scrimmage in each win.

The Colts are trying to keep their slim playoff hopes alive after three straight losses.

Not only are the Saints still chasing a bye week in the playoffs, Drew Brees needs only three TD passes to pass Manning (539) for the most in NFL history — or Brady if the Patriots quarterback has already reached that mark by Monday night.