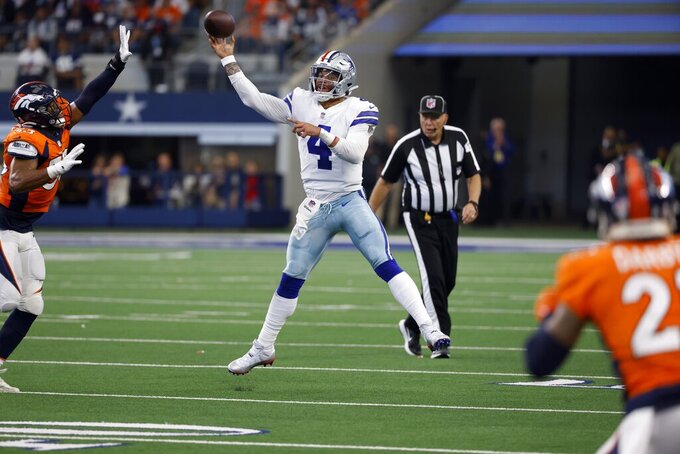 Dak Prescott won't suit up every week in the NFL's first 17-game regular season because he's already had to sit once with a strained right calf.

The star Dallas quarterback can still see the big picture of the added game.

“Just making sure that we stay locked in and focused,” Prescott said before the Cowboys' six-game winning streak ended with a thud in a 30-16 loss to Denver. “I think when you’re having the success we’re having, guys are excited for that extra game just to get out there, continue to build on what we have going right now and propel us into the tournament.”

Coaches and players still say “long season” a lot on a variety of topics. It's just harder to tell if they're using the same old cliche or thinking about adding a week to get within a few days of four full months of football before the playoffs even start.

The consensus: It's probably too early to tell, but it's not something they're completely ignoring.

“I cut some things back in training camp,” Dallas coach Mike McCarthy said. “The initial plan that I put together, we probably hit about 90% of that as far as workload capacity.”

Several years before the 17th game was added, McCarthy was still in Green Bay when he changed the weekly routine to make Friday more about rest and recovery before a final practice Saturday. The 17th game is a perfect fit for that.

Tennessee coach Mike Vrabel lightened the load for the Titans last week before the latest in a series of impressive wins, 28-16 at the Los Angeles Rams. The closest thing to a practice came Friday after lighter workouts the previous two days.

“There are so many ... guys that are working their way through things and battling through just the wear and tear of the regular season,” Vrabel said. “I think that is the biggest thing is trying to be creative and trying to find ways to improve but also ways to take care of guys and also get some other guys some work.”

The Titans also have one of the latest byes, in Week 13 (and remember there are 18 weeks this season), which raises the question of whether those teams (Week 14 is the latest) will have an edge in the latest regular-season finish (Jan. 9) in league history.

The Super Bowl also is later than ever — Feb. 13, or 207 days (29 weeks and change) after the first day that the first teams, Dallas and Pittsburgh, could officially report for training camp. The preseason was shortened by one game.

“You definitely got to focus on recovery,” said Tennessee right tackle David Quessenberry, who has yet to play a full season but is still on track for it this year. “That’s a big part of being able to play week in, week out in this league. But for me, it’s always just focus about the next game. Be completely 100% in to play your best ball just the next week.”

Asked if he remembered a year where he felt particularly run down after 16 games, Dallas running back Ezekiel Elliott said, “That’s every year. I think by Week 16, everyone’s worn out, even you guys. It’s a physical game we play. We plan on playing deeper than 17 weeks anyway.”

That's probably a better way to frame it for players, since they all want the season to end not far from where the Cowboys reported for camp in Oxnard, California, on July 21. The Super Bowl is at year-old SoFi Stadium in Inglewood, California.

With only the top seed in each conference getting a first-round bye, most of the teams are now targeting a 21-game season. The Super Bowl champion will play at least 20 games for the first time.

“When you step out of it and look at it in the offseason, you plan on playing more than 16 games anyway, so playing 17 or playing 18, 19 or 20, whatever it is, whatever the task that is required, we’re going to be up to the challenge,” Minnesota right tackle Brian O’Neill said.

“In terms of routine, I think you’re always trying to make it better, always looking at ways to make your body feel fresher and do things a little bit differently to gain an edge, especially as the season goes on,” O'Neill said. “In late October, November, December, those little things can mean a lot more.”

Elliott, who is in his sixth season, is likely to be battling a right knee issue the rest of the season. If affected him the most so far this year in the loss to the Broncos, but he played through it even with the outcome no longer in doubt.

“The older guys might feel it a little more, but to be honest, I don’t know,” Cowboys tight end Dalton Schultz said. “It’s the longest season we’ve had so it will be an interesting thing to monitor going forward. Younger players probably won’t feel it a whole lot because they won’t know any different.”

The flip side of that is the proverbial rookie wall, which coaches are talking about now with the college season winding down and December games coming for players that only know taking most of that month off before a bowl game, or the four-team College Football Playoff.

There's another layer of the rookie factor this year with several of the high draft picks not playing what would have been their final college seasons in 2020 after opting out because of COVID-19.

Dallas linebacker Micah Parsons, the 12th overall pick out of Penn State, is among those. He's having a strong debut and is the first Cowboys rookie with five sacks in his first eight games.

McCarthy and his staff have meetings tailored specifically for younger players with the idea that they've never played football this long. The coaches also want to make sure the rookies and others aren't overwhelmed by their responsibilities.

“You're always mindful of where they are,” McCarthy said. “They're not used to playing such a long season. The reality of it is, I don't think it's the length of it, it's the intensity and the fact that the urgency has to be there every week.”

Just this once, the rookies and veterans who make it all the way without some sort of interruption will share something new — a 17th regular-season game.