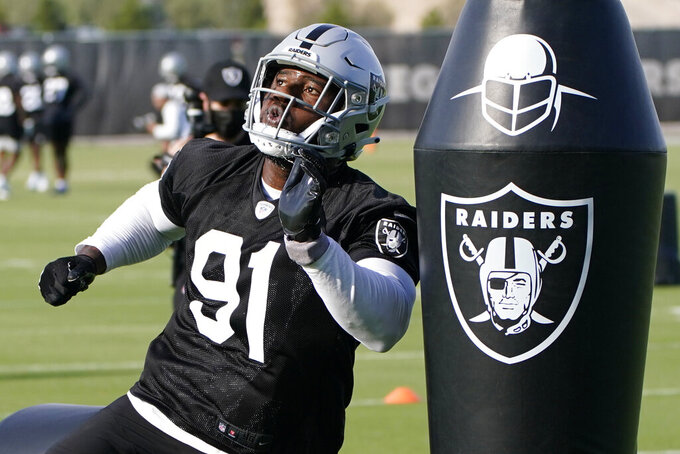 Ngakoue, who worked out on his own during voluntary offseason training activities this spring, impressed teammates and coaches this week in Vegas, giving them a glimpse of what he can bring to a defense that had just 21 sacks, the fourth-fewest in the league, last season.

“There’s certain guys in football that when they step on the field and they do something, you’re like, ‘That’s a different level,’” Raiders quarterback Derek Carr said. “He definitely has that about him.”

Since being drafted by the Jacksonville Jaguars in 2016, the defensive end has put up impressive numbers, ranking 12th in the league in sacks, third in strip sacks (15), sixth in quarterback pressures (190), and second in forced fumbles (18). His 45.5 sacks over his first five NFL seasons are more than the 42.5 combined sacks registered by the Raiders' sack leaders over the same time frame, including star edge rusher Kahlil Mack (2016-17), Maurice Hurst Jr. (2018), and Maxx Crosby (2019-20).

The Raiders have had the fewest sacks and quarterback pressures in the NFL since coach Jon Gruden traded Mack in 2018.

“We’ll see where we are when we lay the leather down in training camp,” Gruden said. “Our coaches have done a great job on defense. I think we’re better. I think we have a chance to be much better and a lot deeper. It’ll be more competitive.”

Last season, Gruden referred to offseason acquisition Maliek Collins as the key to the Raiders' defense up front. In 12 games, Collins registered the second-fewest tackles (15) and zero sacks.

First-year defensive coordinator Gus Bradley said Wednesday that it’s important not to single out any player as the “key” but to establish trust and help players understand their roles in strengthening the defense.

Bradley, who was the head coach of the Jaguars when they drafted Ngakoue, is hoping he’ll have two defensive-line groups that can rotate in order to keep fresh legs on the attack each down, spearheaded by the Raiders’ newest frontline threat and Crosby.

“Everybody knows we are going to be playing 30-35 reps,” Bradley said. “Everybody is getting in there at critical times. I think I’ve learned that through the years, that is so critical especially to that group up front.

“You got guys that are very skilled, guys like Yannick, Maxx Crosby. Those guys have proven that they are very, very good rushers in this league, and so to keep them fresh in critical times, to have them at our services, would be great.”

Ngakoue said he’s ready to add some sting to the Raiders, especially while having to play quarterbacks like Baltimore’s Lamar Jackson in Week 1 on Monday night, Baker Mayfield in Cleveland late in the season, and AFC West quarterbacks Patrick Mahomes and Justin Herbert twice.

“I just want to be the motor to this defense, the motor to the defensive line,” Ngakoue said. “Maxx and myself are both identifying ourselves as the guys that need to put this team on our back as far as the defensive side of the ball. Guys will follow as it goes, you just have to set that standard from here on out. That’s what’s going to happen. Other years don’t matter anymore, it’s a whole new era.”