Nick Foles is Bears starting QB for game against Colts 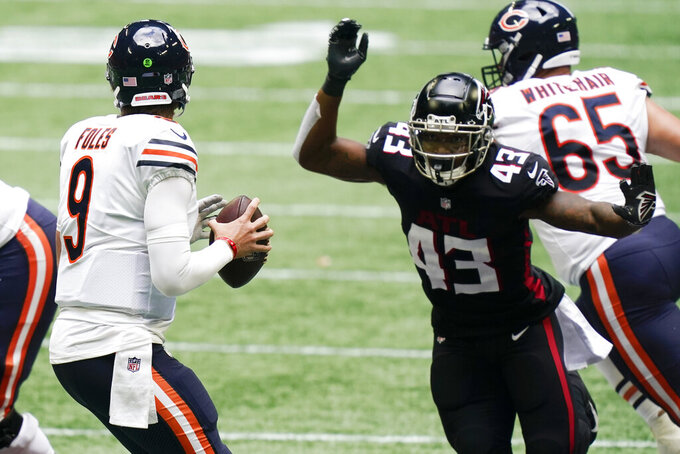 Chicago Bears quarterback Nick Foles (9) works against the Atlanta Falcons during the second half of an NFL football game, Sunday, Sept. 27, 2020, in Atlanta. (AP Photo/Brynn Anderson)

Nagy on Monday made the announcement after hedging Sunday following the Bears’ 30-26 victory over the Atlanta Falcons. Foles had come on in relief of an ineffective Mitchell Trubisky following Blidi Wreh-Wilson’s interception in the third quarter.

In the fourth quarter, Foles threw three touchdown passes including a 28-yard TD against the blitz to Anthony Miller for the winning points with just under two minutes remaining.

Trubisky has started for the Bears since the fifth game of the 2017 season after being the team’s No. 1 draft pick, the second pick overall that year.

Trubisky had completed 13 of 22 for 128 yards with a touchdown Sunday before the interception by Wreh-Wilson set up a field goal for a 26-10 Atlanta lead.

Foles threw a 3-yard TD pass to Jimmy Graham and a 37-yard TD strike to Allen Robinson before the game-winning TD.

The Bears had rallied earlier in the season opener against the Lions in a similar way, overcoming a 17-point deficit in the fourth quarter with Trubisky at quarterback.