Nielsen says World Series is a snooze for most TV viewers 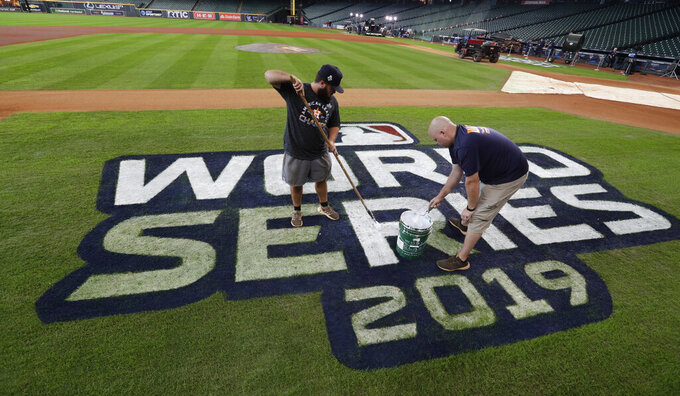 NEW YORK (AP) — Fans in Washington and Houston may be excited, but the rest of the country is reacting to the World Series with a collective yawn.

Through the first five games, the World Series has been averaging 11.6 million viewers, the Nielsen company said. That puts it on pace to be the least-watched Fall Classic ever, although ratings tend to pick up when a series reaches a sixth or deciding seventh game. Game 6 is Tuesday in Houston.

The previous low point came in 2012, when an average of 12.64 million viewers watched the San Francisco Giants complete a four-game sweep over the Detroit Tigers.

From an audience perspective, the Series was really hurt Sunday night, when 18.3 million people watched an NFL game between Green Bay and Kansas City compared to the 11.4 million who tuned into baseball at the same time. That's the widest viewership margin an NFL game has ever had over a World Series game at least since Nielsen began keeping more precise records in 1987.

ABC's "World News Tonight" topped the evening newscasts with an average of 8.2 million viewers. NBC's "Nightly News" was second with 7.7 million and the "CBS Evening News" had 5.3 million viewers.

ABC is owned by The Walt Disney Co. CBS is owned by CBS Corp. CW is a joint venture of Warner Bros. Entertainment and CBS Corp. Fox is owned by Fox Corp. NBC and Telemundo are owned by Comcast Corp. ION Television is owned by ION Media Networks.