Nike, NFL and others to start giving workers Juneteenth off 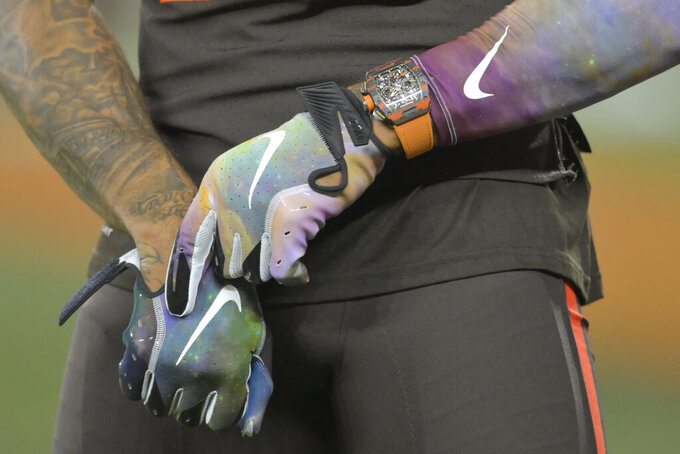 In this Sept. 22, 2019 file photo Nike logos adorn the gloves of Cleveland Browns wide receiver Odell Beckham Jr. (13) before an NFL football game against the Los Angeles Rams in Cleveland. Nike, the NFL and other businesses are giving their employees a paid day off on Juneteenth for the first time, the latest example of how American employers are responding to protests that have placed additional attention on racial injustice in the U.S. NFL Commissioner Roger Goodell wrote in a note Friday, June 12, 2020 that its offices would be closed June 19. (AP Photo/David Richard, file)

NEW YORK (AP) — Nike, the NFL and other businesses will give their employees a day off for Juneteenth for the first time this year, the latest example of how American employers are responding to protests that have placed additional attention on racial injustice in the U.S.

Juneteenth commemorates June 19, 1865 when Major General Gordon Granger came to Galveston, Texas, to announce the end of the Civil War and slavery. Although slavery was already abolished more than two years earlier by the Emancipation Proclamation, it continued in some areas.

Texans began celebrating the day a year later with parades and parties. It’s not a federal holiday, but most states observe it in some way, except three: Hawaii, North Dakota and South Dakota, according to a list compiled by the Congressional Research Service.

Businesses have been forced to re-examine their policies after pressure from employees and ongoing protests over the death of George Floyd on May 25 after a white Minneapolis police officer pressed his knee into the handcuffed black man’s neck for several minutes, even after he pleaded for air.

Some businesses have professed support for the Black Lives Matter movement or pledged to donate money to organizations. Others have promised to hire more black workers or make other policy changes.

This week, Nike CEO John Donahoe told workers they would get Juneteenth off starting this year as a way to celebrate black culture and history.

“Our expectation is that each of us use this time to continue to educate ourselves and challenge our perspectives and learn,” Donahoe wrote in a memo. “I know that is what I intend to do.”

NFL Commissoner Roger Goodell, who last week said that the league was wrong to not listen to football players who have protested police brutality on the field since 2016, wrote in a note Friday that its offices would be closed June 19.

“The power of this historical feat in our country’s blemished history is felt each year," Goodell wrote in a memo. "But there is no question that the magnitude of this event weighs even more heavily today in the current climate.”

After getting feedback from black employees, The New York Times said it would give employees an additional day off and encouraged them to use it on June 19.

Earlier this week, Twitter co-founder and CEO Jack Dorsey tweeted that U.S. employees would have Juneteenth off “forevermore” as a day for "celebration, education, and connection.” Dorsey said employees at Square, the mobile payments services company he also runs, would get the day off, too.