Niners look to end road struggles with win at Carolina 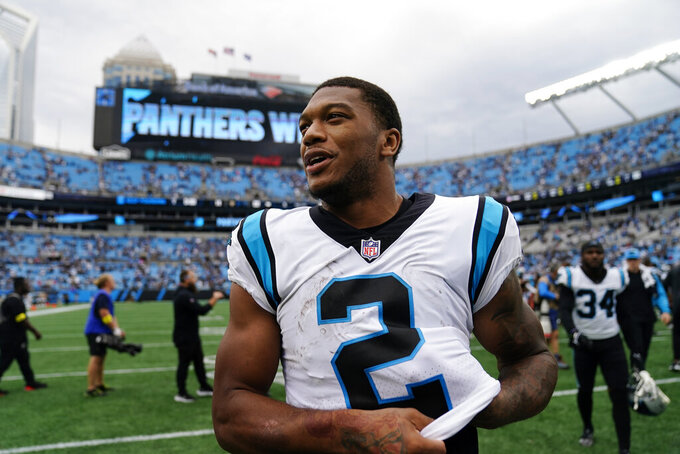 OPENING LINE: 49ers by 6 1/2, according to FanDuel SportsBook.

TURNOVER DIFFERENTIAL: 49ers plus-1; Panthers minus-2.

49ERS PLAYER TO WATCH: DE Nick Bosa had two sacks and 14 quarterback pressures last week, according to PFF. He leads the NFL with six sacks and is one of three players to have at least one sack in every game. The most recent player to have at least one sack in the first five games was Clay Matthews in 2019. The 49ers had seven sacks last week of the Los Angeles Rams' Matthew Stafford.

PANTHERS PLAYER TO WATCH: D.J. Moore. Panthers coach Matt Rhule said the team needs to make a concerted effort to get Moore more involved in the offense this week. After having three straight seasons with at least 1,150 yards receiving, Moore has just 138 yards on 13 receptions through four games.

KEY MATCHUP: Panthers QB Baker Mayfield vs. 49ers defense. Mayfield has had an NFL-high 11 passes batted at the line of scrimmage. Opposing rushers are purposely looking to get their hands up and disrupt passing lanes, making it difficult for the 6-foot-1 Mayfield to see his receivers.

KEY INJURIES: The Niners are on their third-string LT after All-Pro Trent Williams went down with a high ankle sprain in Week 3 and Colton McKivitz hurt his knee last week. Jaylon Moore is expected to get the nod. ... DT Arik Armstead is dealing with a foot injury that sidelined him in Week 3 and forced him to leave last week’s game early. ... DT Javon Kinlaw (knee) sat out last week but could be active this week. ... The Panthers will be without S Jeremy Chinn, one of their top defenders and leading tacklers, because of a hamstring injury. ...WR Laviska Shenault's status is uncertain after he injured his hamstring in Week 4.

SERIES NOTES: The Panthers came into the league as an expansion team in 1995 and initially played in the NFC West with the 49ers. San Francisco was their first rival. ... The Panthers have won six of the past eight matchups.

STATS AND STUFF: San Francisco will stay East after this game and practice in West Virginia before playing at Atlanta next week. ... The 49ers are allowing 3.81 yards per play, the fewest through four games since 2008. ... The Niners defense has allowed only 37 points this season, tied for the second fewest through four games since 2010. Only the 2019 Patriots allowed fewer with 14. ... The Niners haven’t allowed a first-half TD all season. ... San Francisco has forced a league-high 18 three-and-outs and is tied for second with 15 sacks, including seven last week. ... The 49ers are tied for the fewest three-and-outs on offense with four. ... San Francisco DE Samson Ebukam had his third career multi-sack game last week. ... Niners LB Dre Greenlaw had a career-high 15 tackles last week. ... The Niners are 0-2 on the road. They were the third-best road team the past three seasons with an 18-7 mark. ... This is Carolina's third straight home game. ... The Panthers have lost 10 of their past 11 games. ... The Panthers have lost eight of their past nine home games. ... Carolina is last in the league in third down rate, converting just 25.5% of its attempts. ... RB Christian McCaffrey has two 100-yard rushing games and two games where he's been held to fewer than 35 yards rushing. ... DE Frankie Luvu had a 33-yard interception return for a touchdown against the Cardinals after a forced fumble that led to a touchdown return the week before against the Saints. ... K Eddy Pineiro is 8 of 8 on field-goal attempts since joining the Panthers. ... Panthers P Johnny Hekker completed a pass off a fake punt last week, but the first down was nullified because of an illegal man downfield.