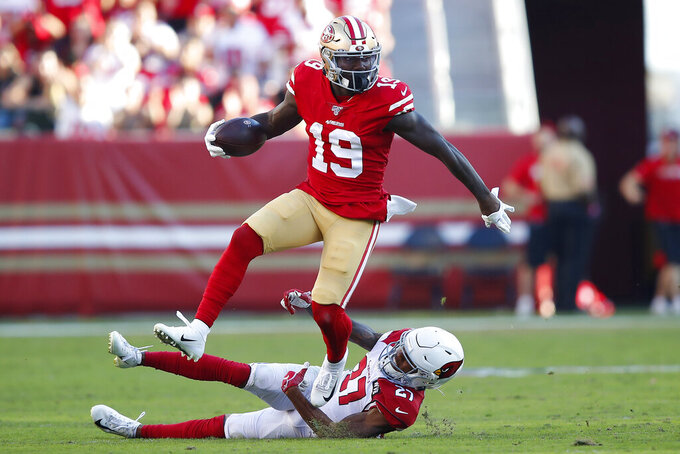 SANTA CLARA, Calif. (AP) — Deebo Samuel has emerged as a go-to receiver for the San Francisco 49ers at just the right time.

Samuel has shaken off a slow start to his rookie season by elevating his game the past two weeks when quarterback Jimmy Garoppolo has been mostly without his top two targets, with tight end George Kittle sidelined by injuries and Emmanuel Sanders limited by injured ribs.

With 16 catches for 246 yards over the past two weeks, Samuel is proving why the Niners made him the third receiver selected in April's draft.

“He's fearless," teammate Richard Sherman said. "Deebo Samuel is fearless. He'll run through any catch. You get some receivers running across the middle and they're looking for who's going to him them. Deebo is looking for who he's going to hit. That's a much different mentality than most people."

That toughness was a big reason why the Niners were so excited to get Samuel in the draft, with general manager John Lynch saying he had the mentality of a running back rather than a receiver.

That has been evident so far this year as no receiver with more than 50 targets has averaged more yards after the catch than Samuel's 7.3 this season, according to SportsInfo Solutions.

"It is just a mentality I always played with growing up," Samuel said. "The mentality that not one guy is going to bring me down."

Samuel took a little bit of time to find his game this year but now leads all rookies with 38 catches on the season and ranks fourth with 473 yards receiving.

Samuel had five catches just once in San Francisco's first eight games and only topped 50 yards once as well, recording five catches for 86 yards in Week 2 against Cincinnati.

But that all started to change two weeks ago against the Seahawks, when Samuel was given a much bigger role with Kittle sidelined by injuries to his knee and ankle and Sanders knocked out of the game early with the rib injury.

Samuel became the first 49ers rookie since the merger to post back-to-back 100-yard receiving games. He joined Jerry Rice, Terrell Owens and Dwight Clark as the only San Francisco wideouts since the merger to have two straight games with at least eight catches and 100 yards.

“The game has not been too big for Deebo at all," coach Kyle Shanahan said. "He's had to learn a lot on the run through each game, just the stamina it takes to play throughout an NFL game, how different those 65 plays are in the NFL compared to usually those 90 in college just down in and down out. Deebo gets better each week, he studies his game plan as hard as anyone in our building and I think he just gets more confidence with the more opportunities he gets. Just the physicality he's played with has been a lot for us to rely on, especially for a rookie throughout this time."

Samuel is quickly earning the trust of his quarterback as well, for the toughness he showed in coming back from a shoulder injury sustained on a circus catch by the sideline and his ability to make plays consistently. He missed practice with the shoulder injury Wednesday, but the team is hopeful he will be able to play this week against Green Bay.

"He's one of those guys you love to have in your foxhole," Garoppolo said. "He just gets banged up out there, keeps coming back, doesn't even question it or anything. He's a fighter, man. You love having guys like that on your team."