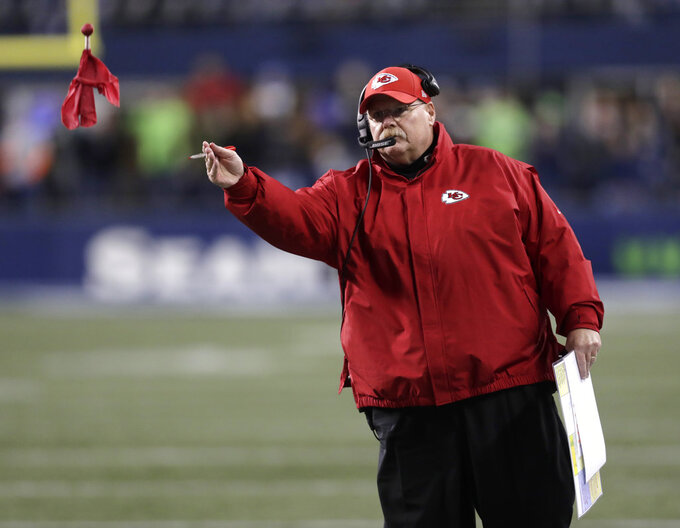 Kansas City Chiefs head coach Andy Reid throws his challenge flag on a call of pass interference against the Chiefs during the first half of an NFL football game against the Seattle Seahawks, Sunday, Dec. 23, 2018, in Seattle. The challenge was unsuccessful and the penalty was upheld. (AP Photo/Stephen Brashear)

KANSAS CITY, Mo. (AP) — The Kansas City Chiefs went into their regular-season finale with a lot riding on the outcome.

Beat the Raiders and they would have their third consecutive AFC West championship and the No. 1 seed in the playoffs, not to mention home-field advantage throughout. Lose to their longtime division rivals and risk falling to the No. 5 seed as a wild-card team with a much more difficult road to Atlanta.

But the biggest takeaway from the Chiefs' victory over Oakland last Sunday was this: That top seed in the AFC means a first-round bye, and a much-needed opportunity to get some big stars healthy.

Star safety Eric Berry had a recurrence last week of the heel pain that kept him out most of the season, sidelining him against the Raiders. Wide receiver Sammy Watkins remained out with a foot injury, running back Spencer Ware was sidelined by a hamstring problem, right guard Laurent Duvernay-Tardif spent his first week on the practice field after a broken leg landed him on injured reserve.

With a week off, there's a chance all of them could be ready for the playoffs.

"We will have to see throughout the next week here just exactly how that goes," Chiefs coach Andy Reid said this week. "Let's just see how it plays out and how the guys do. I'm sure some of them will be through the following week, too, as far as the game week goes. We will just have to see how it all goes."

Berry missed all of last season after tearing his Achilles' tendon, then had his heel act up early in training camp. He didn't hit the practice field until midway through the season, and didn't make his debut until Week 15, when the Chiefs lost to the Chargers in a game he played about a half.

He played more the following week against the Seahawks, slowly ramping up his activity level, and was starting to resemble the three-time All-Pro of old when he experienced a setback in practice.

Now, Berry may be the biggest wild card for the Chiefs heading into the playoffs.

On the other side of the ball, the Chiefs have continued to score at a record pace despite losing a series of crucial players. Watkins hasn't played a full game since getting hurt in early November, Ware has been slowed the last few weeks and Duvernay-Tardif has been on IR since Week 5.

The Chiefs are confident Ware will be able to go, an important piece ever since they swiftly cut ties with Kareem Hunt following a series of off-field issues midway through the season. Damien Williams played so well in relief that he earned a contract extension last week, but journeyman Darrel Williams and longtime backup Charcandrick West are the only other running backs on the roster.

In other words, getting Ware back provides not only another playmaker but adds some needed depth.

Watkins was starting to show why the Chiefs signed him to a $36 million, three-year contract this past offseason when his foot injury occurred. The Chiefs have used a rotation of players to cover for him, and there was enough concern about his returning that they signed Kelvin Benjamin to help.

Demarcus Robinson has been perhaps the biggest bright spot since Watkins has been out, but the Chiefs getting their No. 2 wide receiver back for the playoffs would only help the league's highest-scoring offense.

It would also take some of the pressure off wide receiver Tyreek Hill and tight end Travis Kelce.

As for Duvernay-Tardif, the Chiefs have shuffled offensive linemen throughout the season as injuries have piled up, even signing former starter Jeff Allen to provide some help. But they're finally healthy across the board, and that means Duvernay-Tardif can take his time working back up to speed.

He had a three-week window after coming off IR before the Chiefs must decide whether to active him, and adding one of the league's best run blockers back to the mix would be a welcome addition.

"He has another couple weeks of flexibility with that. He went through practice last week. We will keep him coming on that," Reid said. "There are certain things he can do well and other things that he still is working through. We will see how that goes."

As the top-seeded Chiefs spend this week getting healthy, they also will begin preparations for their divisional opponent. They'll face the lowest remaining seed among the Colts, Ravens or Chargers, and the only team they haven't faced this season is Indianapolis.

They beat the Ravens and split with the Chargers, each team winning on the road.