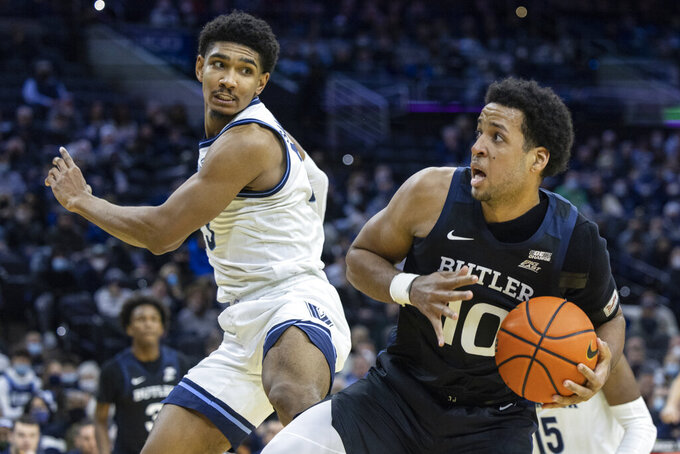 PHILADELPHIA (AP) — Jay Wright heard hollering from the Villanova fans who lingered at a bar near his postgame news conference and the Hall of Fame coach needed a score update.

It was bad news for Wright — the Philadelphia Eagles were losing a playoff game.

His only worry of the day was the fate of his favorite football team. The team he coaches, well, a 40-point victory romp was the outcome he wanted most.

Collin Gillespie hit five 3-pointers and scored 17 points, and Justin Moore scored 15 points to lead No. 14 Villanova to its sixth straight win, 82-42 over Butler on Sunday.

“We’re starting to be able to do this for 40 minutes,” Wright said.

That's bad news for the rest of the Big East.

The Wildcats (13-4, 6-1) are rolling again since dropping their conference opener and never let Butler get comfortable at the Wells Fargo Center.

With a noon start, the Wildcats did Philly sports fans a favor and used a 13-2 run to decide this one by halftime -- enough time to flip over to catch the opening kickoff of the Eagles’ playoff game at Tampa Bay. The bar areas on the concourse were swarmed with fans who decided to watch playoff football on big screens over the Wildcats stretching their lead to 25 only minutes into the second half.

The only boos all day from the announced crowd of 17,009 — there were many no-shows among that inflated number — came when Buccaneers 7, Eagles 0 was flashed on the big screen.

Butler (9-7, 2-3) had given Wright’s Wildcats fits more than any other team in the Big East since 2016. The Bulldogs’ five wins over that span were the most of any team against Villanova over that span.

Six was never in play.

The Wildcats made their first six baskets and shot a whopping 71% in the first half. Gillespie and Eric Dixon each made all four of their shots and Villanova was 5 of 7 on 3s. The Wildcats hit Butler from all over the court: 3s, post-ups, drives for easy dunks -- such as Caleb Daniels’ two-handed baseline jam that woke up the crowd.

The Wildcats found balance in this one: Dixon and Jermaine Samuels each scored 14 points and Wright emptied his bench early in the rout.

The Wildcats opened the second half on an 11-0 run and Butler missed 11 straight shots at one point in a rare lopsided mismatch between the programs. Villanova’s numbers were astounding: 19 assists on its first 23 baskets; did not let Butler shoot a free throw in the first half; had 11 3-pointers at the point Butler made just 14 baskets.

The Wildcats shot 50% in the second half and made 10 of 11 free throws in perhaps their most complete game of the season. They stumbled early against rugged competition — losing to AP Top 25 teams UCLA, Purdue and Baylor — but have steadied themselves with complete efforts in conference play.

“We talked about that all the time, making sure that the energy level stays up and that we compete for another 20 minutes, we've got to put together a full 40 minutes and I think we did a pretty good job of making sure we were ready to go in the second half," Gillespie said.

Butler: The Bulldogs will want to trash this game film and try and make a quick recovery with three more games over the next seven days.

Villanova: The Wells Fargo Center is the site of the NCAA Tournament East Regional this season and the Wildcats would love to stay close to campus and play here in March. The Wildcats moved to 32-5 at the Center since the 2014-15 season. They play at the home of the 76ers two more times in the regular season, against UConn and Seton Hall next month.

The Bulldogs never scored more than five straight points, shot only 3 of 6 from the free-throw line and scored just 16 baskets. Butler scored only 19 points in the second half. Butler had 12 turnovers.

“We didn't expect that from ourselves,” Butler coach LaVall Jordan said. “We didn’t compete well enough from the jump. We’ll pick ourselves up off the mat and get ready against Connecticut."