No. 5 Spartans try to keep unbeaten quest on track at Purdue 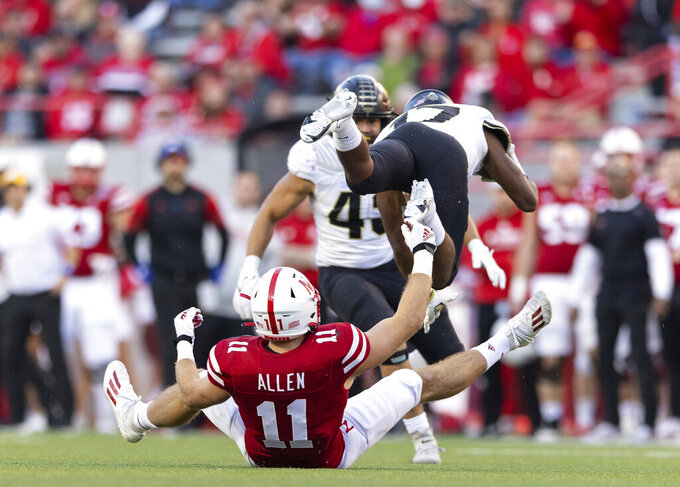 Purdue's Chris Jefferson (17) intercepts a pass intended for Nebraska's Austin Allen (11) while leaping over him in the second half of an NCAA college football game Saturday, Oct. 30, 2021, at Memorial Stadium in Lincoln, Neb. Purdue defeated Nebraska 28-23. (AP Photo/Rebecca S. Gratz)

He reworked the Spartans offense, with a heavy emphasis on playing physical and winning games the old-fashioned way. So far, it's worked perfectly.

Now comes the next wrinkle and the fifth-ranked Spartans hope to keep their unbeaten season going with a win at Purdue.

The stakes are soaring.

If the Spartans successfully navigate the next four weeks, they'll head to Indianapolis in early December to play for the program's first conference crown since 2015.

There are higher aspirations, too. As the league's last unbeaten team, Michigan State (8-0, 5-0, No. 3 CFP) might be the Big Ten's best hope of earning one of the four precious playoff berths.

The problem: Getting to 9-0, something the Spartans last accomplished in 1966.

They had a chance in 2015 but lost Game 9 at Nebraska. In 1999, coach Nick Saban took the Spartans to Purdue after they'd beaten rival Michigan to reach 6-0. They lost to Drew Brees and the Boilermakers.

Tucker wants to make sure it doesn't happen again.

“We’ve got a lot of work to do, we've got a lot to prove. We’ve got a chip on our shoulder," he said. ”There’s no lack of focus here. We’ve already moved on from last game.”

They've already beaten one top-five program, then-No. 2 Iowa on the road, and if they match that feat Saturday at home Purdue would become bowl-eligible for the first time in three years.

Coach Jeff Brohm has a reputation for pulling upsets, finding creative ways for his quarterbacks to generate points and this year an improved defense has been among the league's stingiest.

Now Brohm will find out how it holds up against the surging Spartans.

“They’ll throw it when they need to and have to, and they'll mix it up," Brohm said. “But for the most part, they’re going to rely on that running game, and they’ve done a great job with it.”

Michigan State running back Kenneth Walker III kept himself in the Heisman Trophy hunt with a 197-yard game in last week's 37-33 victory over then-No. 6 Michigan.

He also made history. The Wake Forest transfer became the first player to rush for five scores against the Wolverines. Walker leads the FBS with 149.2 yards per game and ranks among the national leaders with 15 TD runs.

“We felt like he would be a difference-maker for us," Tucker said. “That’s why we wanted him.”

David Bell has been one of the Big Ten's top receivers since he burst onto the scene three years ago. The Purdue star is nearing some major milestones this weekend.

The Indianapolis native needs 10 catches to become the sixth player in school history with 200. He also needs four yards receiver to become the fifth player with 2,500 and his next touchdown catch would tie DeAngelo Yancey (20) for No. 7 on the school's career list.

Coaches know the dangers caused following a key, emotional win — the letdown. Tucker said he's heard from some people this week who wanted to make sure he guarded against the trap even though he didn't need the advice.

“I don’t understand any of that,” he said. “If you study the film, you know who you’re facing. Obviously, they’re a good football team. They have a history of beating ranked football teams when they’re unranked and they’ve won some big games this year. They’re playing at a high level and they expect to win.”

By Teresa M. Walker 46 minutes ago
By John Marshall an hour ago
By Greg Beacham 2 hrs ago
By Tom Withers 2 hrs ago
By Rob Maaddi 3 hrs ago