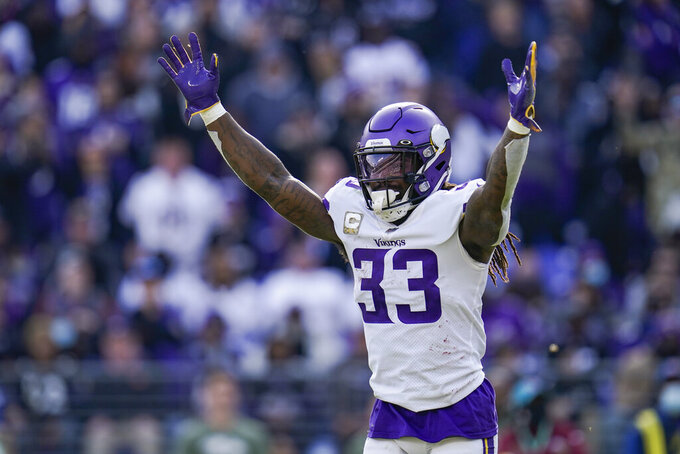 Minnesota Vikings running back Dalvin Cook celebrates a touchdown by quarterback Kirk Cousins during the first half of an NFL football game against the Baltimore Ravens, Sunday, Nov. 7, 2021, in Baltimore. (AP Photo/Julio Cortez)

EAGAN, Minn. (AP) — Minnesota Vikings running back Dalvin Cook, facing a personal injury lawsuit from a former girlfriend for allegedly assaulting her during an altercation at his home last year, maintained Wednesday he was the victim in the fight.

NFL spokesman Brian McCarthy said the matter will be reviewed under the league's personal conduct policy, but Cook will continue to practice and play with the team.

“We will continue to monitor developments, but there’s no change to his status as this is a civil complaint,” McCarthy said.

Cook's attorney, David Valentini, said Tuesday, after the lawsuit was first reported by the Star Tribune, his client had the legal right to defend himself because the woman entered Cook’s home with a stolen garage door opener, punched him and sprayed mace in his face without provocation. Valentini said the woman and her attorney were trying to extort Cook for “millions of dollars.”

At his weekly media availability Wednesday, Cook declined to divulge further details but said again he was the one who was harmed. He said he was not considering his own legal action but deferred all other comment to Valentini.

“I know that the facts of the situation will come out and clear everything up,” Cook said.

Included as evidence in the lawsuit filed in Dakota County District Court was a message sent from Cook to the woman after the fight apologizing for his actions. She said she suffered a concussion, deep cuts to her face and other bruising. The lawsuit seeks damages in excess of $50,000 for claims of assault, battery and false imprisonment.

“I’m a pretty private person. Just seeing my business out on the social web is not ideal for me. I try to walk that straight line, but bumps and bruises come through life and it’s how you handle it,” Cook said. “I’ve been through a lot of tough things in my life, and I’ve got my head up high knowing that the truth will come out. I hate being a distraction to the team, but I know those guys have got my back 1,000%.”

The Vikings play at the Los Angeles Chargers this weekend.

“I’m here to work, and I’m letting my legal team handle all the legal matters. I’m handling what I can handle. I’m here where my feet are at. I’ve got my head in it trying to get ready for a game plan for the Chargers and just letting the outside things handle the outside things," Cook said.

Coach Mike Zimmer said he wasn't concerned about Cook. He's got plenty of other worries with the Vikings slumped to a 3-5 record and more COVID-19 spread throughout the team.

Zimmer said one vaccinated player whom he declined to identify was admitted to the emergency room Tuesday because of COVID-19-related breathing trouble and remained hospitalized Wednesday.

“He’s stable now. But it was scary," Zimmer said.

Smith, Bradbury and Dozier had to sit out the last game at Baltimore. Smith, who is unvaccinated, has also been ruled out of the game Sunday. NFL protocols for unvaccinated players who test positive require a minimum 10-day isolation.