No excuses: Mayfield turns page on 2019, focused for Browns 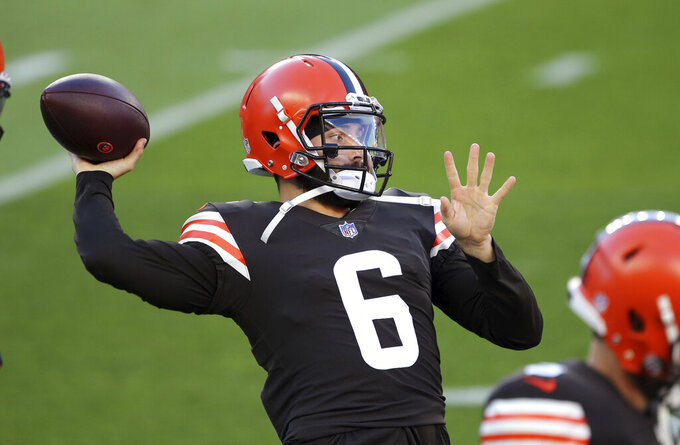 Baker Mayfield has plenty of excuses he could use to explain his steep decline in his second season with the Browns.

Days away from starting a critical third season in the NFL, Mayfield won't look back on his two previous years other than to learn from them. The No. 1 overall pick in the 2018 draft hopes to rebound from a season in which his stats dropped, his confidence wavered and questions arose as to whether he can be a franchise quarterback.

He's got a lot to prove.

“Yeah,” he said. "Out to prove, but to be much better than what I have shown in the two years prior.”

Mayfield dedicated this offseason to improving his game — physically and mentally. He worked hard on toning his body, dropping some of the weight he packed on before last season that he thought was needed to withstand punishment.

It just slowed him down.

And the sometimes brash 25-year-old QB came back to Cleveland acting more mature and centered. Last year, humbled him.

“He’s more focused,” wide receiver Rashard Higgins said. “I feel like he knows what he has to do. He has a goal in his mind and I really believe he’s set out to do it. I feel like there’s a way better version that he’s showing us that y’all haven’t seen yet.”

Mayfield's first chance to show off his makeover will be Sunday at Baltimore against reigning league MVP Lamar Jackson and a Ravens team with Super Bowl aspirations.

It would be a daunting challenge under normal circumstances, but even more so for the Browns, who are starting over again under first-year coach Kevin Stefanski, and like every other team, didn't get a chance to work out any wrinkles when the preseason was scuttled by the COVID-19 pandemic.

Stefanski is Mayfield's third coach in three seasons, four if you count interim Gregg Williams, who took over when Hue Jackson was fired during the 2018 season. Mayfield seemed caught off guard when he was informed he's just one of six quarterbacks to have three coaches in his first three seasons.

“It is a wild stat,” he said. "It is not a defining thing for me. It could be an excuse if you use it, but that is not what I am doing here. Singular focus on this year and what we can do, and that is the ultimate goal so move forward.”

Before the bottom fell out on the Browns last season, they played perhaps their best game at Baltimore in Week 4, beating the Ravens 40-25.

Mayfield passed for 342 yards, Nick Chubb rushed for 165 and three TDs and Cleveland looked like the playoff contender it had been crowned in the preseason. A four-game losing streak followed and the season ended with coach Freddie Kitchens being fired.

Mayfield said the impressive, all-around performance doesn't give the Browns any extra confidence they can do it again.

“To be honest with you, last year does not matter,” he said. "They are a great team. It is a new year, new personnel and new coaching staff for us. It is a clean slate on our minds.”

Mayfield wiped out much of his memory from last season, when he threw the second-most interceptions in the league, his completion percentage dropped from his rookie year and he often bailed out of the pocket at the first hint of pressure.

He acknowledged battling self-doubt, an admission that raised eyebrows and underscored the pressure Mayfield felt to succeed.

The lack of a preseason could lead to some early struggles, but Mayfield said the Browns aren't looking for any easy outs.

“That could be an excuse if you wanted to use it, but we are not doing that,” he said. "We know what we have to do. ... It is not about what’s happened and the adversity. It is about how you can handle those things. That is just our motto.”