No help needed for Ravens, who earn playoff spot with win 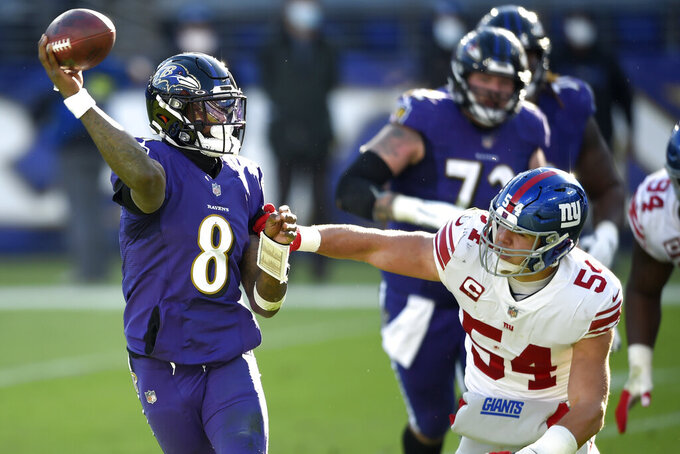 BALTIMORE (AP) — A year ago, the Baltimore Ravens had already wrapped up the No. 1 seed in the AFC playoffs as they headed toward the final week of the regular season.

Baltimore rested many of its starters in that meaningless finale, a luxury derived from its stature as the team with the best record in the NFL.

This season, the Ravens face a must-win situation Sunday in Cincinnati. And they couldn't be happier, considering all they've gone through to get this far.

Baltimore started 5-1 before a coronavirus-induced slump — combined with injuries to starting left tackle Ronnie Stanley and tight end Nick Boyle — left the Ravens at 6-5 and in desperate need of a late surge to reach the postseason.

Baltimore responded with four straight victories, capped by a 27-13 domination of the New York Giants on Sunday. That win, combined with losses by Indianapolis and Cleveland, means the Ravens (10-5) will earn a wild-card berth by beating the Bengals.

“It’s nice," tight end Mark Andrews said. “You try not to look too far elsewhere, but we control our own fate, and that’s a great feeling."

Cincinnati is coming off wins over Pittsburgh and Houston, which is more significant to the Ravens than their 27-3 rout of the Bengals in October.

“I expect Cincinnati to come out and play us hard,” linebacker Chris Board said. “We have to win the game to advance, so it’s playoff football. We’ve been playing playoff football the last three or four weeks.”

Perhaps facing high stakes in the season finale will bring about a different result in the postseason if Baltimore wins on Sunday. Last year, the Ravens followed an irrelevant matchup against Pittsburgh with a loss to Tennessee in their playoff opener.

Ravens quarterback Lamar Jackson sat out that Pittsburgh game while looking ahead to the postseason. On Sunday, his full attention will be centered upon defeating Cincinnati.

“That’s all we can focus on right now," he said. “We can’t focus on anything else.”

The Ravens scored on all four of their first-half possessions against New York to build a 20-3 lead that proved insurmountable to the offensively challenged Giants.

Baltimore took the opening kickoff and held the ball for more than eight minutes during an 82-yard drive that put New York behind for good.

“We’re used to doing stuff like that; we started off last year doing things like that," Jackson said. “Late this season, we started doing the same thing. We just have to keep it going.”

Perhaps it's nitpicking, but the Ravens failed to produce a turnover or even force a fumble, and thus finished with a minus-1 turnover differential. That's uncharacteristic of a defense that's thrived on takeaways this season, amassing 20 of them over the first 14 games.

Although Board doesn't get the accolades heaped upon several other outstanding members of the defense, he had two sacks on Sunday and registered an assist on special teams.

“He has played excellent football,” Harbaugh said. “Chris Board is becoming a regular in our rotation. He’s making tackles. He’s covering well. I think he’s really making a name for himself.”

Running back Mark Ingram was inactive for a second straight game. Harbaugh insists a lingering ankle issue is slowing down Ingram, but the 31-year-old wasn't listed on the injury report and has clearly taken a back seat to J.K. Dobbins (13 carries, 80 yards against New York) and Gus Edwards (15, 85).

Cornerbacks Marcus Peters (calf) and Jimmy Smith (shoulder) missed a second straight game, leaving the Ravens thin in the secondary. In addition, receiver Willie Snead twisted his leg and center Patrick Mekari hurt his back, but Harbaugh hopes to have both back Sunday.

249 — That's how many yards rushing the Ravens had against New York, the third time in four games they've topped 200 yards on the ground. Baltimore has topped 100 yards rushing in 38 straight games, the second-best streak in NFL history.

Baltimore has won four in a row against the Bengals, the past two by a total of 60 points.

an hour ago
By Pat Graham 3 hrs ago
By Arnie Stapleton 7 hrs ago
By W.g. Ramirez 10 hrs ago
By Brett Martel 12 hrs ago