No place for hate: Hackett has no Raiders-Broncos animus 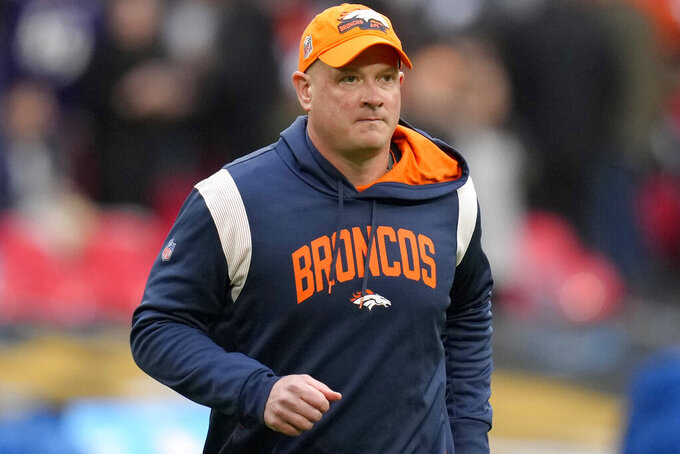 ENGLEWOOD, Colo. (AP) — It's Raiders Week, and Broncos coach Nathaniel Hackett is still about all the hugs and not the hate.

Before the AFC West rivals met earlier this season, then-Broncos linebacker Bradley Chubb said he absolutely hated the Raiders, something Hackett couldn't seem to wrap his head around.

“Can’t really hate anybody in this world. That’s too much energy. It’s another game, we’re excited to go against the Raiders,” Hackett said 48 hours before the Broncos' 32-23 loss at Las Vegas on Oct. 2.

That marked Raiders coach Josh McDaniels' first win since he was fired by the Broncos in 2010 amid a videotape scandal and a 5-17 slide that followed his 6-0 start as Mike Shanahan's replacement.

While the Raiders-Broncos rivalry ranks a notch below the mud-baths and bloodbaths that define the Steelers-Browns and Packers-Bears rivalries, it's always meant something extra to the players.

Just Wednesday, Broncos safety Justin Simmons threw in a couple of "I don't like the Raiders” asides while answering unrelated questions about their upcoming game.

Hackett's indifference to the heated nature of the rivalry in Week 4 puzzled Broncos fans who have long loathed the Raiders, no matter if the silver and black were in Oakland, Los Angeles or Las Vegas.

The teams meet again Sunday with both in a spiral behind struggling veteran quarterbacks and scuffling offensive-minded first-year head coaches who have already received votes of confidence from their respective owners.

Denver is averaging just 14.6 points per game, its lowest scoring output since 1971, and the Broncos are wasting a historically good defense that's allowing just 16.5 points per game.

If they were only as good as Carolina, which ranks 23rd in the league in scoring at 20.4 points a game, the Broncos could be 8-1 and the narrative surrounding the pairing of Hackett and Russell Wilson would be a whole lot different.

The Raiders have lost three games in which they blew a lead of 17 points or more, and they're coming off a 25-20 loss to the Colts just six days after Jeff Saturday left the broadcast booth to serve as Indy's interim head coach.

“Somebody’s got to win this game," Hackett said Wednesday, omitting the possibility of a tie.

Hackett, whose good-natured demeanor is much like that of Jason Sudeikis' head soccer coach character in “Ted Lasso,” was asked Wednesday if, competitively speaking, he'd found any hatred in his heart for the Raiders ahead of his second game against them.

“That’s a good question. You’re trying to get me riled up there, aren’t you?” Hackett replied with a wide smile. "You know, the Raiders, I’ve been on a lot of teams and around the Raiders a lot. My dad coached for the Raiders a little bit, so that was a unique family situation.

“But you know just always having them around in the division and stuff like that, the Raiders are a great organization. They’ve been around for a long time and I’m excited to go play ’em.”