No preseason games could mean sloppy start for special teams 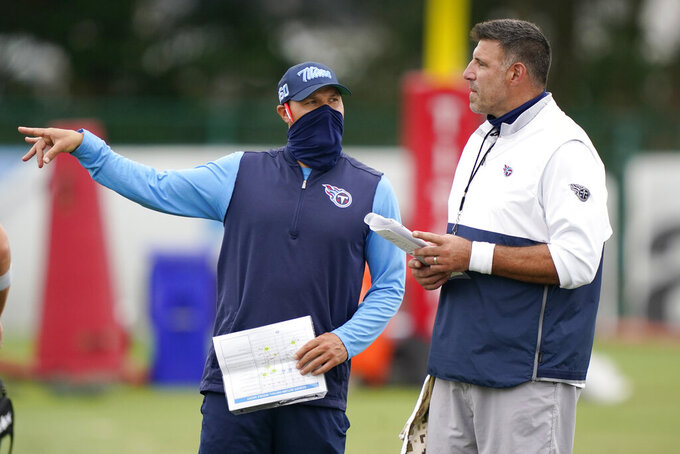 FILE - Tennessee Titans head coach Mike Vrabel, right, talks with special teams coach Craig Aukerman during NFL football training camp Friday, Aug. 28, 2020, in Nashville, Tenn. Coaches around the NFL aren't quite sure what they'll get starting Thursday night when the 2020 season kicks off. The pandemic led to the league and players agreeing to limit potential exposure by wiping out all four preseason games, and that took away the ability to hone timing for special teams. (AP Photo/Mark Humphrey, Pool, File)

NASHVILLE, Tenn. (AP) — Penalties. Blocked punts or would-be field goals swatted out of the air. A kick returner weaving his way to a touchdown.

Players racing onto the field for a change of possession looking like a well-oiled machine, or a unit straggling out before the play clock expires. Worse, a key contributor stuck on the sideline leading to a touchdown.

Coaches around the NFL aren't quite sure what they'll get starting Thursday night when the 2020 season kicks off. The pandemic led to the league and players agreeing to limit potential exposure by wiping out all four preseason games, and that took away the ability to hone timing for special teams.

That could lead to lots of sloppiness until special teams players get live work blocking and tackling for punts, field goals and kickoffs.

“That’s the biggest thing the preseason games' losses mean is you don’t ever get a chance to get that true game speed," Dallas special teams coordinator John Fassel. “You also don’t get a chance to tackle and block at those high speed collisions.”

Marwan Maalouf, coordinator of Minnesota's special teams, predicts teams that are fundamentally sound will be good from the start of the season. He also expects some sloppy play that will get cleaned up as the season progresses. Maalouf says teams either are sloppy early or late due to a lack of good practices.

“I never took a lot of stock in the past if something didn’t go right in preseason games because that’s a learning tool, and now that’s gone,” Maalouf said. "It’s just going to be one of those situations where we have to be on point so much more, especially in the return phases and coverage phases.”

Mike Westhoff, the special teams pioneer who coached in the NFL for 32 years, said he had several current coaches call him for tips on how to best replicate the speed of preseason games during training camp. The man who tied a tether ball to a crossbar to practice punt blocks said the key is thinking outside the box.

“You have to be creative with these things to still get what you're trying to get because you're not having the X number of times in the preseason games to get these guys to cover a kickoff, cover a punt, defend a punt, all the things that take place,” Westhoff said.

Think shrinking the field to avoid wearing players out. Forget using the full 100 yards to practice kickoffs or even punt returns. Think 20 or 30 yards instead of punting 50 yards or a regular kickoff.

“You'll never get enough reps to do it,” Westhoff said of using a full field. “You're going to kill them.”

Coaches have tried to adapt. Fassel had Dallas do a nearly live punt drill Thursday in which the Cowboys ran downfield as close to full speed as possible, only to pull up instead of tackle. The Jets have emphasized wrapping up, tackling, stripping the ball in more physical drills.

“It does make it tough for us, but we are doing the best we can to try to get these guys going,” Jets special teams coordinator Brant Boyer said.

Tennessee has tried to pressure punt returners as much as possible in practice, surrounding each returner with three or four players so he focuses on the ball while making the catch.

“Not like they’re getting the total live look as a punt returner, but if we can get guys that are in front of him all the time, he’s got to come up and make contested catches, whether it’s with the gunners, or just the coach, or the other returners that are back there helping him out,” Titans special teams coordinator Craig Aukerman said.

The Raiders have practiced live kickoffs and kickoff returns going to the point where players thud, or collide without tackling and going to the ground.

“I feel like we’ve given them ample opportunity for them to show what they can do,” Raiders special teams coordinator Rich Bisaccia said.

The Titans are among the teams with veterans like Nick Dzubnar and Will Compton whose special teams skills make them even more valuable in a year when rookies not only had no preseason games but no offseason program.

“The ability to be able to fast track and plug and play and play on short notice I think will be valuable this year, particularly with everything going on and not really knowing how the year and season is going to unfold ...,” said Compton, who played for Aukerman and the Titans before re-signing Aug. 27. “I do think it only helps.”

No preseason games also will hurt rookies who didn't play special teams in college and now have no film of themselves in the NFL showing off new skills. Titans general manager Jon Robinson said teams will have to project and rely on their college scouts to determine who could help on special teams.

That means some players will miss out on their NFL chance.

“You may very well lose out on some young guy that really could for the next five or six years be a key ingredient for you," Westhoff said, "and you're never going to find out.”