No QB this time: Bengals take tackle Williams in 1st round 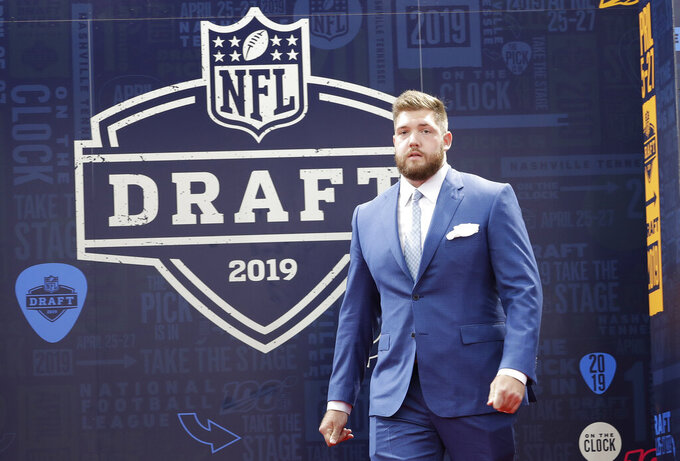 Alabama tackle Jonah Williams walks the red carpet ahead of the first round at the NFL football draft, Thursday, April 25, 2019, in Nashville, Tenn. (AP Photo/Steve Helber)

CINCINNATI (AP) — No quarterback. No linebacker, either. Instead, the Bengals revisited their years-long effort to fix their offensive line with their first pick in the draft.

The Bengals took Alabama tackle Jonah Williams 11th overall Thursday night, right after their biggest rival swooped in and got a linebacker they valued. The Steelers traded with the Broncos to get Michigan's Devin Bush at No. 10.

"We suspected that's what they were going to do," first-year head coach Zac Taylor said. "When it's done a spot ahead of you, whether it's a division rival or not, there's a guy we were targeting there at 11."

Bush would have replaced Vontaze Burfict and filled the biggest hole on what was the league's worst defense last season. Instead, the Bengals took an offensive tackle for the second time in four years. Williams was the first offensive tackle taken in the draft.

"Picking at 11, it could have sorted out in a lot of different ways," Taylor said.

The biggest intrigue with Cincinnati was whether the Bengals would go after a quarterback in the first round for Taylor to develop in his system. But Andy Dalton has two years left on his deal, and owner Mike Brown speaks glowingly of the 31-year-old quarterback.

The Bengals passed on a quarterback — for now — to upgrade a line that's been a work in progress.

They thought they were set when they got tackles Cedric Ogbuehi and Jake Fisher with their first two picks in 2015, but they didn't pan out and the Bengals parted ways with them after last season.

Williams gives them some options for next season. They could move Glenn to guard or use Williams at a spot other than left tackle at the outset.

"That's fine," Williams said on a conference call. "Hey, they picked me."

Williams has never been to Cincinnati, but he's aware of the team's transition on offense. The Bengals are working under their fourth offensive coordinator in five years. Taylor, who was the Rams' quarterbacks coach, plans to call the plays.

"With coach Taylor being an offensive-minded guy and all the success he's had with teams, I'm impressed with that," Williams said. "I want to be part of that, the new-look Bengals."

The Bengals finished 26th on offense last season, a year after finishing last in the league. Dalton missed the last five games with a torn ligament in his right thumb, and receiver A.J. Green missed seven games with an injured toe. Both have fully recovered.

Ohio State quarterback Dwayne Haskins was available when the Bengals picked at No. 11. Washington took him with the 15th overall pick.

Cincinnati still desperately needs a linebacker after releasing Burfict last month, a turning point for the franchise. Burfict had a subpar season that included another suspension and various injuries. He had no interceptions or sacks in seven games, prompting the Bengals to finally part ways.

The defense was so atrocious that head coach Marvin Lewis fired coordinator Teryl Austin midway through the season and assumed the duties himself. A 6-10 finish — Cincinnati's third straight without a winning record — led to Lewis' ouster after 16 seasons in Cincinnati.