No quarterback, but Washington quietly fills holes at draft 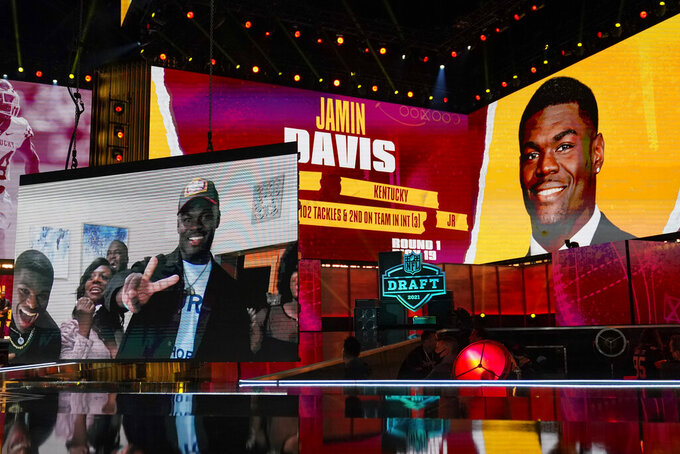 Images of Kentucky linebacker Jamin Davis are shown on stage after he was chosen by the Washington Football Team with the 19th pick in the first round of the NFL football draft Thursday April 29, 2021, in Cleveland. (AP Photo/Tony Dejak)

WASHINGTON (AP) — Instead of shaking up the first round with a blockbuster trade up for the next quarterback of the future, Washington spent the NFL draft quietly plugging holes all over the roster.

Making a big splash hasn't worked out so well for this organization in the past, so coach Ron Rivera and his front office will gladly take a seemingly productive weekend of checking off items on the offseason to-do list.

Washington got a linebacker who should start as a rookie in first-round pick Jamin Davis. Second-rounder Sam Cosmi could turn out to be the long-term answer at left tackle. And on Saturday, Washington got a tight end in John Bates and a safety in Darrick Forrest.

“We came into it understanding some areas that we definitely wanted to address. We were able to address most of those areas,” general manager Martin Mayhew said. “We feel great about where we are right now, we feel great about these guys’ opportunities with us, but it’s a process that takes some time to evaluate how good these guys can actually be on the football field.”

Some should be able to contribute immediately, from Davis and Cosmi to third-round pick Dyami Brown and long snapper Camaron Cheeseman taken in the sixth. Forrest and pass rushers Will Bradley-King and Shaka Toney picked in the seventh could be valuable reserves while they develop.

Rivera acknowledged this draft “isn't just about one piece” for a team that won the NFC East at 7-9.

He said: “We have a chance to put pieces into place” to build the kind of sustainable contender Washington hasn't had in decades.

“We feel good about what we did,” Rivera said. “We won’t know until we start playing for real in September.”

The temptation was there to make a move up if Washington wanted a quarterback: either Ohio State's Justin Fields or Alabama's Mac Jones. But after signing 38-year-old Ryan Fitzpatrick to compete with Kyle Allen and Taylor Heinicke for the starting job, Rivera was more than fine trying to use this draft to build around the rest of the offense.

“We’ve put playmakers around, then we went out and got a veteran, experienced quarterback in Fitz that we really think can really do a good job distributing the ball for us and has the arm strength to get the ball downfield,” he said.

While Mayhew said speed wasn't the sole reason for taking any player, it helped in a lot of cases. Rivera likes guys who can “play fast” and got plenty of them. Asked about a theme for Washington's 10-pick draft, Rivera said, "I know you guys are dying and waiting for me to say team speed.

“That is a big part of it,” he said, “because we want guys to play fast and understand that this is about us being an up-tempo football team.”

After not wanting to give up future assets to move up from 19th in the first round, Washington traded a 2022 fifth-round pick to NFC East rival Philadelphia for the 225th and 240th picks. The late sixth-rounder became Cheeseman from Michigan and the early seventh-rounder Bradley-King from Baylor.

“We felt like the opportunity presented itself to get more draft picks,” Mayhew said. “It's a pick for next year, but we felt that there were enough quality players left to make a move and get some extra picks.”

Washington didn't pick a running back, but it's signing University of Buffalo standout Jarret Patterson as an undrafted free agent. The undersized back tied the single-game Football Bowl Subdivision record with eight rushing touchdowns Nov. 28, coming up just short of the yardage record set by Samaje Perine, who was a fourth-round draft pick for Washington in 2017.