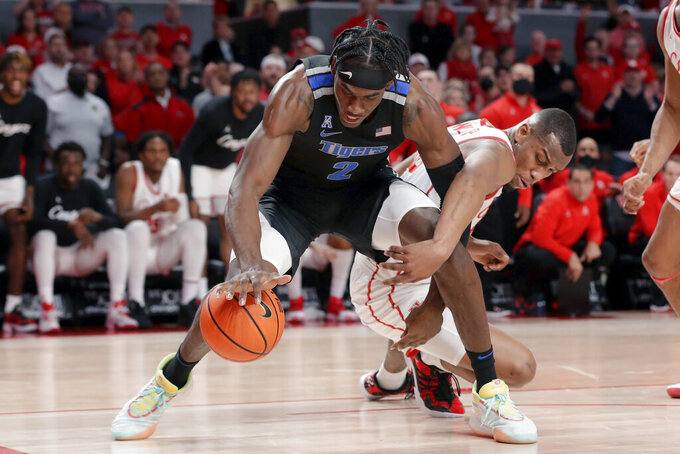 HOUSTON (AP) — Landers Nolley II scored 20 points and Jalen Duren had 14 points and 11 rebounds as Memphis rallied past No. 6 Houston 69-59 on Saturday and snapped the Cougars’ 37-game home winning streak.

DeAndre Williams and Lester Quinones each scored 13 points as the Tigers (14-8, 8-4 American) won their fifth straight.

“Obviously, there was a lot of emotion coming in and after the game, I’m just excited, happy,” Duren said. “I know it was a big game for us. I know I had show up. I know I had to come with all I could, and I tried to do it to the best of my abilities.”

Houston also lost its second straight after a 12-game winning streak. It’s the first time Houston has lost consecutive games since January 2017, when they lost three in a row.

Memphis coach Penny Hardaway called the victory his most vindicated because of Houston’s win streak and national ranking.

“We came in locked and focused all week,” Hardaway said. “I was trying to keep the guys focused on Tulane, but I could tell they were antsy to get to this game because Houston has been the standard in our league.”

Fabian White Jr. and Taze Moore each had 15 points, and Jamal Shead added 12 points for Houston (20-4, 9-2). Houston entered with three straight wins over the Tigers.

“Most of the guys that we have weren’t here last year and I think that matters,” Houston coach Kelvin Sampson said. “The guys that beat those guys are gone. … We’ve got guys that have never played in this rivalry. I don’t know if it’s preparation or the want to, but you have to give credit to Memphis.”

The Cougars shot 46% and hit 7 of 23 from the arc. Houston finished with a season-high-tying 19 turnovers.

“There’s two basketball teams out there, Houston and Memphis,” Sampson said. “I think we can beat Memphis. Memphis can certainly beat us. What we can’t do is beat both teams. When you have 19 turnovers you are playing against two teams. We’re not good enough to beat both teams.”

“It was toughness, it was effort, it was unselfishness,” Hardaway said of the game-deciding run. “It was the will to win. It was everything that you needed to do to play against Houston and win in any place, especially on their home floor.”

Memphis jumped to a 15-4 lead capped by a free throw by Josh Minott with 14 minutes remaining in the first half. Houston answered with a 13-2 run to tie it at 17 on a 3-pointer by Edwards with just under 10 minutes left in the half.

Memphis: The Tigers strengthened their NCAA Tournament resume with the Quadrant 1 win. … Memphis finished with 19 turnovers. … The Tigers outrebounded Houston 30-26.

Houston: The Cougars’ two straight losses hurt their NCAA Tournament resume after the Cougars’ win streak, and there are few opportunities left for quality wins. … Houston had a 32-18 advantage in points in the paint.

FACES IN THE CROWD

Memphis: Travels to Cincinnati on Tuesday.