Not getting their kicks: Dolphins keep losing on walk-offs 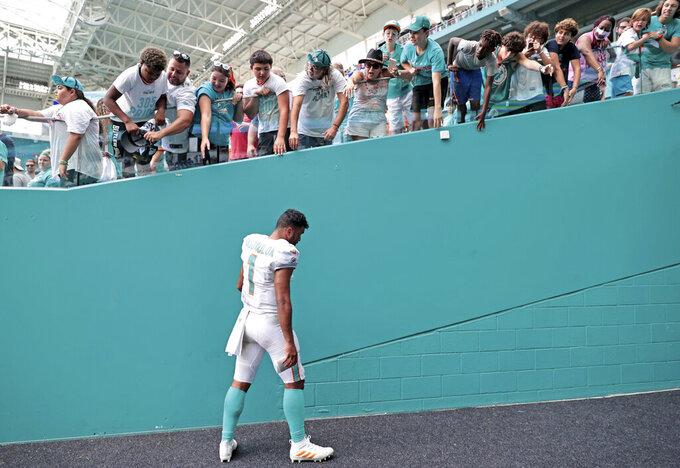 Miami Dolphins quarterback Tua Tagovailoa (1) walks out the fields after loss to the Atlanta Falcons in an NFL football game against the Atlanta Falcons, Sunday, Oct. 24, 2021, in Miami Gardens, Fla. (David Santiago/Miami Herald via AP) 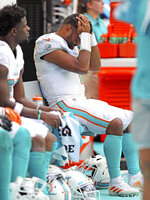 MIAMI GARDENS, Fla. (AP) — It has become a sad and unwanted tradition for the Miami Dolphins this season. The opposing team kicks a field goal on the game’s final play, begins celebrating a dramatic victory and the Dolphins can only watch in disbelief.

In an eight-season span, 2013 through 2020, that precise scenario happened only twice.

In 2021, with the season not even half over, such has been the Dolphins’ fate three times — including each of the past two weeks against Jacksonville and Atlanta, a pair of losses that turned what was a bad start of the season into an all-out disaster.

“We’ve talked about the margin for error the last couple weeks, really all year,” Miami coach Brian Flores said. “We’re really on the wrong side of that. There’s a myriad of reasons why, but when it comes down to a field goal at the end there’s always one, two plays that could have turned it, could have been the difference. We understand that.”

Point: The Dolphins have been close to winning in half of their defeats this season. Counterpoint: At 1-6, they’re tied for the second-worst record in the NFL and no team in the past half-century has started with such a record and gone on to make the playoffs.

And now it gets worse: AFC East leader Buffalo is waiting for Miami this week, having won six straight against the Dolphins, mostly in complete blowouts.

As is the case with any 1-6 team, the speculation about changes will be a constant. The trade deadline is approaching next week and Miami’s involvement with Houston in talks for quarterback Deshaun Watson is no secret. If the Dolphins make that trade, that suggests they believe Watson is the answer and starter Tua Tagovailoa is not.

If only that was the issue.

Tagovailoa played the best game of his NFL career Sunday against Atlanta, in a loss. He wasn’t the problem. There isn’t just one problem. Miami is giving up too many points, something that isn’t Tagovailoa’s fault or that Watson would fix. The Dolphins haven’t been great running the ball, though it could be argued that better quarterback play will soften up opposing defensive fronts. Flores, when mentioning areas Miami needs to improve, always mentions special teams; Watson won’t be playing on those.

A franchise that keeps losing games on kicks at the end now has to decide if it wants to kick Tagovailoa back to the bench, for a player in Watson who has been accused of sexual assault and harassment in lawsuits filed by 22 women. Watson has not been charged.

“He is the ultimate competitor,” wide receiver Isaiah Ford said. “I think you saw that in how he plays, how he is running. Not sliding when there were some tough yards and we might need those extra yards and he is trying to fight for every one of them. Hurting, sore, tired, frustrated or whatever the case is, he is going out there and going to war with his family and we’ve got his back.”

Tagovailoa on opening drives. Tagovailoa was 7 of 8 for 52 yards and a touchdown on Miami’s first possession Sunday. He’s 19 of 22 for 177 yards, two scores and no interceptions on first drives this season — an 86% completion rate and a quarterback rating of 130.5.

Tagovailoa, again. He knows the trade talk is out there. The two interceptions were bad, but 32 of 40 passing and four touchdowns, plus running when he had to, still while dealing with rib pain ... he certainly didn’t play like someone resigned to losing his job.

The defense. Lost in all the quarterback and trade talk is this: The Dolphins have allowed 207 points in seven games. Entering Monday, only Washington (210) had allowed more. It’s the fifth-most points any Miami team has allowed through seven games in the franchise’s 56-year history. And the minus-80 point differential through seven games is third worst in team history.

The Dolphins are bracing to be without RB Malcolm Brown (quad) and DB Jason McCourty (foot) for at least three weeks, after being hurt Sunday. LB Jerome Baker (knee) is being considered day to day. WR Will Fuller (hand) is not expected to come off injured reserve this week.

2012 and 2013: The previous time Miami lost two consecutive games on final-play field goals was 2012, both of those coming in overtimes. And the previous season in which Miami lost three games by three points or fewer, before this year, was 2013. The Dolphins lost on kicks not just to Atlanta and Jacksonville this season, but also to Las Vegas in an overtime game in Week 3.

The Dolphins (1-6) head to Buffalo on Sunday, looking to avoid losing seven consecutive games to the Bills for the first time in the rivalry’s 56-season history. Average score of the past six Buffalo-Miami games: Bills 39, Dolphins 19.