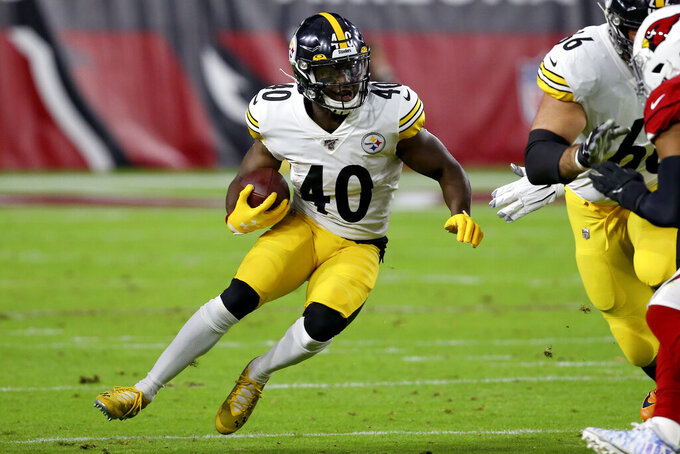 Pittsburgh Steelers running back Kerrith Whyte (40) runs against the Arizona Cardinals during the first half of an NFL football game, Sunday, Dec. 8, 2019, in Glendale, Ariz. (AP Photo/Ross D. Franklin)

PITTSBURGH (AP) — Darryl Drake called it in April. Minutes after the Pittsburgh Steelers selected wide receiver Diontae Johnson in the third round of the draft, his new position coach provided an impassioned endorsement of the modestly rated kid from Toledo who won Drake over with all the things you can't measure.

“He is an exciting football player, and he can stop and start and he can make people miss in open space," Drake said. “That was really one of the most intriguing things about him. I’ve been doing this for 40 years, and he was one of the best interviews and guys I’ve been around in a long time.”

Eight months after Drake's glowing assessment and four months after the veteran coach's death during training camp — a loss that the group he left behind is still grappling with — Johnson is paying tribute to his mentor with his inspiring play. The tools Drake saw on tape were on full display during a 23-17 victory over Arizona on Sunday.

Want straight-line speed? Watch Johnson pulling away from everyone during the end of an 85-yard punt return for a touchdown in the second quarter that gave the Steelers a 10-0 lead. Want the ability to make guys miss? Check out Johnson's zigzagging across the field in the third quarter, turning a loss into a 14-yard gain. Johnson's been impressing with his hands all year, but his quickly improving route-running was on full display during a 2-yard touchdown reception in the third quarter in which he created the perfect throwing lane for quarterback Devlin “Duck” Hodges.

"I just stepped through my techniques and ‘Duck’ put it in the right spot for me to make a good play,” Johnson said after the Steelers improved to 8-5 to hold on to the second wild-card spot in the AFC.

While Hodges' unlikely rise from training camp arm in August to starter for a playoff-contending team in December has gained most of the attention during Pittsburgh's improbable rally from a 1-4 start, he's hardly the only rookie making a sizable impact on a patchwork offense missing quarterback Ben Roethlisberger, running back James Conner and wide receiver JuJu Smith-Schuster.

Fourth-round pick Benny Snell has run for 202 yards and a touchdown over the past three weeks while filling in for injured starter James Conner. Kerrith Whyte — who was on Chicago's practice squad a month ago — accounted for 74 total yards against the Cardinals. Johnson has been electric at times while trying to navigate the roller coaster that's almost impossible to avoid when asked to play 16 games. He showed mental toughness against the Cardinals by bouncing back from a forgettable game last week against the Browns — when he caught just one of the five passes thrown his way, was flagged twice on penalties and prematurely gave up on a route on an overthrown pass that turned into a 28-yard interception return by Cleveland's Terrance Mitchell — to give the Steelers the jolt they needed to escape the desert with their postseason hopes alive.

“Dionte is doing his thing and once he’s rolling, he’s rolling.," Snell said. "I’m very happy with his performance and Duck’s been doing a great job of putting everything on the money and keeping the offense under control. The offense has been great.”

That might be stretching it. “Good enough” is probably the more apt term for a team that's yet to crack 30 points or 400 yards this season. Yet the play of Johnson, Snell and Whyte has somehow kept the Steelers afloat.

“We managed the growth of guys like Diontae and Benny Snell ... because we want them to be guys on the rise down the stretch, not guys that are dying on the vine," coach Mike Tomlin said. "All of those guys have an opportunity to be on the rise and maybe today was an illustration of that in his case. We’ll see.”

The sacks and turnovers keep coming for a defense that has made sure the offensive limitations haven't ended Pittsburgh's season. Arizona's Kyler Murray had thrown just six interceptions during an impressive rookie season before being picked off three times on Sunday. The Steelers also sacked the elusive Murray five times, including twice on the Cardinals' futile last-gasp possession.

While the offense has avoided mistakes, it also continues to get bogged down in the red zone. The Steelers only turned one of their four red zone possessions into touchdowns. That's got to change if they want to put together one of the more unlikely playoff berths in recent memory.

Cornerback Joe Haden might be having the best season of his 10-year career. Haden's two picks on Sunday gave him four in five weeks.

Punter Jordan Berry should probably stick to his day job. His ill-advised fake punt attempt in the fourth quarter — on a play in which the fake was called off by the guys at the line, a message that never got to Berry — set up an Arizona touchdown and nearly cost Pittsburgh a game it largely controlled.

Tight end Vance McDonald is dealing with a concussion and running back Jaylen Samuels has a groin issue. There is hope Conner and Smith-Schuster could return to face the Bills.

16 — the number of consecutive seasons the Steelers have finished .500 or better, a streak that seemed unlikely to continue after Roethlisberger went down in September. Yet it remains very much alive thanks in large part to perhaps the best coaching job of Tomlin's career.

See if the Steelers can beat the Bills at their own game. Both teams rely on aggressive defenses to take some of the pressure off conservative offenses led by young quarterbacks. A win and Pittsburgh holds the top AFC wild-card spot. A loss and the hill to the postseason could become considerably steeper.