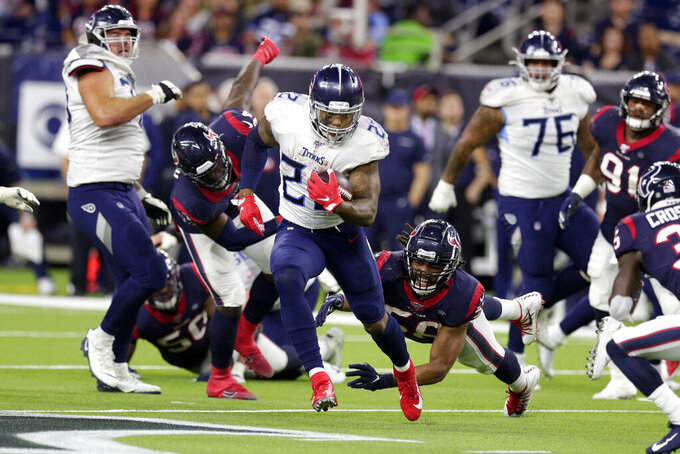 Tennessee Titans running back Derrick Henry (22) breaks away from Houston Texans linebacker Peter Kalambayi (58) to run for a 53-yard touchdown during the second half of an NFL football game Sunday, Dec. 29, 2019, in Houston. The run moved Henry into first place for the season rushing record. The Titans won 35-14. (AP Photo/Michael Wyke)

NASHVILLE, Tenn. (AP) — No one is a harsher critic of Titans running back Derrick Henry than himself.

“I just want to do my job very well,” Henry said Wednesday. “If I don't, I'm hard on myself. I just keep working until I get it right.”

The NFL rushing leader and first-time Pro Bowl running back will get a chance Saturday night to improve on his last performance against the Patriots in the playoffs. Henry ran 12 times for 28 yards — a 2.3-yard average per carry — with nothing over 4 yards. He did catch three passes for 21 yards, but the Titans lost 34-14 in the divisional round on Jan. 13, 2018.

Since then, the 2015 Heisman Trophy winner has been punishing defenders, piling up yards in his best year yet. Henry capped his fourth season with 1,540 yards rushing and tied for the league lead with 16 rushing touchdowns, which he calls a “team accomplishment.”

Coach Mike Vrabel told his Titans before they clinched the AFC's second wild card that being able to run is how teams win in the postseason. Tennessee (9-7) ranks third in averaging 138.9 yards a game.

“You control the ball, control the tempo,” Vrabel said. “I would say that there’s probably less turnovers on running plays than there are on passing plays, and turnovers at this point in the year are critical. The last game the Patriots lost was Jan. 20, 2013 in the playoffs at home, and they had three turnovers and the Ravens had zero. So, that’s a telling stat.”

How well Tennessee runs Saturday night against the Patriots will hinge on Henry, who averaged 20.2 carries in 15 games played this season. He is averaging 5.1 yards per carry, and also has had three touchdowns on runs of 53 yards or longer this season.

And Henry knows that.

“You have to run the ball to get to the Super Bowl, so I think running the ball effectively is a big key to winning games in the playoffs,” Henry said.

New England (12-4) finished sixth against the run, allowing only 95.5 yards a game. Patriots coach Bill Belichick said it's impossible to mimic the 6-foot-3, 247-pound Henry's size, speed and physical play in practice, though there's not many guys like him in the NFL. The Patriots have seen Henry up close most recently during joint practices in August, which helps.

“He can make you miss in space, he can drop his pads and run with power and run over you. He’s a good inside runner, good outside runner, and catches the ball well and he’s got speed to go the distance. He doesn’t get caught much. He gets a step and then he’s able to finish it off,” Belichick said.

“He’s got a good stiff arm. He breaks a lot of tackles in the secondary from guys that just can’t get close enough to wrap him up —he just pushes them away.”

Henry's best season yet is perfect timing. The running back who lasted until the No. 45 pick overall in the second round before Tennessee selected him out of Alabama is in the final year of his rookie contract. Henry made clear during the offseason that his contract status was not an issue.

His motivation is simple: “I love playing."

Henry and the Titans had to balance an injury over the past month. A sore left hamstring prompted Tennessee to hold him out of a Dec. 22 loss to New Orleans, and he is averaging 149.3 yards rushing over his past six games, including a season-high 211 yards in last week's win in Houston.

“We like to call that being a professional — trying to make the hard look easy,” Vrabel said.

Henry is very good at that, and he's not on the injury report this week.

NOTES: CB Adoree' Jackson practiced fully Wednesday for a second straight day after missing the past four games. WR Kalif Raymond (concussion protocol) was limited in his first practice in two weeks. RT Jack Conklin (knee) was added to the injury report and was limited. WR Adam Humphries (ankle) did not practice.