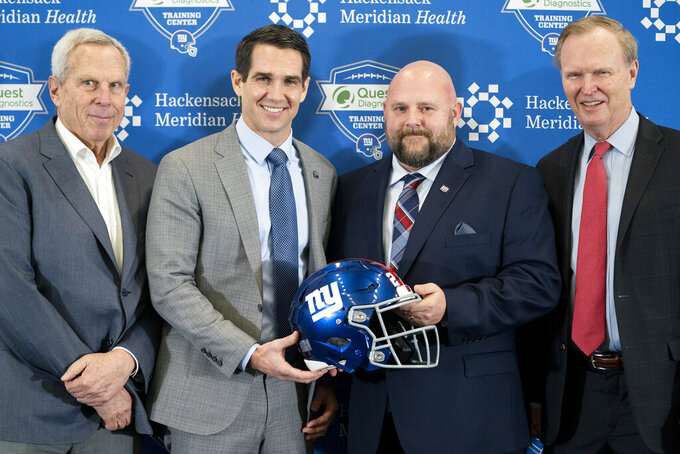 NEEDS: New general manager Joe Schoen took over a bad situation from Dave Gettleman. The Giants are coming off a horrible season and have no cap space: $3.7 million in the hole after cutting tight ends Kyle Rudolph and Kaden Smith, running back Devontae Booker and punter Riley Dixon. New York has invested half its cap space in five players — DL Dexter Lawrence, CBs James Bradberry and Adoree Jackson, WR Kenny Golladay and LB Blake Martinez. Schoen must make roster moves if he wants money to fix some of the holes on both sides of the ball. The organization could try to get Bradberry, Lawrence and Martinez to rework their current deals. The biggest need is the offensive line. Left tackle Andrew Thomas was the only player worth keeping. The release of Rudolph and Kaden Smith and the prospect of Engram leaving create a hole at tight end. The release of Booker may indicate New York is counting on Saquon Barkley for a fifth season. There had been some trade talk. The glaring need on defense is an edge rusher, which could be filled with one of their two first-round draft picks (Nos. 5 and 7). They also might consider a young safety with Logan Ryan now 31 and Peppers probably not coming back. With the exception of long snapper Casey Kreiter and one or two others, it's unlikely the Giants re-sign their free agents, unless at a bargain.