Obanor paces No. 11 Texas Tech for sweep of No. 7 Baylor 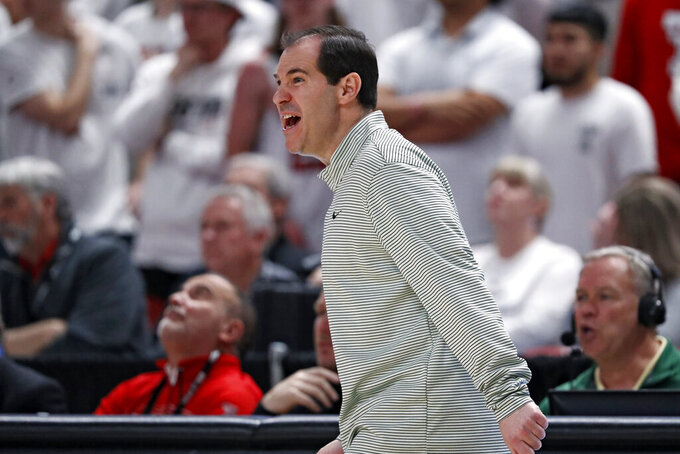 Baylor coach Drew Scott yells out to his players during the first half of an NCAA college basketball game against Texas Tech, Wednesday, Feb. 16, 2022, in Lubbock, Texas. (AP Photo/Brad Tollefson)

“I can’t say too much on camera, but he wasn’t happy,” Obanor said. “We were down and we were just playing with no energy. ... He called a couple of people out, including myself.”

Obanor scored 21 of his 23 points in the second half while rediscovering his long-range shot, and had nine of his 13 rebounds after the break when the 11th-ranked Red Raiders overcame a seven-point deficit to beat No. 7 Baylor 83-73 on Wednesday night.

“Kevin just put it in another gear,” Adams said. “That second half, he put us over his shoulders and said, ‘Hey, I’m not gonna let us lose,’ and had a great 20 minutes. ... He just took the game over.”

When Obanor had consecutive 3s again later in the game, Tech led by double digits for the first time.

“We had a lot of mishaps in the second half that allowed him to shoot,” Baylor guard Adam Flagler said.

“My teammates, my family, they just helped encourage me, telling me to pick up my head and they believe in me,” Obanor said. “Once you get confidence like that, you can truly enjoy playing for a team like that.”

Bryson Williams added 17 points for Tech, which had a 51-point outburst in the second half to improve to 16-0 at home this season. Adonis Arms scored 15 points, while Terrence Shannon had 14 points and five assists.

James Akinjo had 18 points and seven assists for Baylor (21-5, 9-4), while Adam Flagler had 14 points and Matthew Mayer 13. Jeremy Sochan had eight points and 10 rebounds.

“Really played well the first half and then second half turned it over,” Bears coach Scott Drew said. “We didn’t rebound, we didn’t get stops, we didn’t get in transition.”

Baylor had a 21-game winning streak before its 65-62 home loss on Jan. 11 to the Red Raiders, who overcame an early 15-point deficit in that game.

With Kansas City Chiefs quarterback Patrick Mahomes among those in the sold-out arena cheering on his school, Texas Tech competed its first season sweep of the Bears since 2004-05.

The Bears played a day after leading rebounder Jonathan Tchamwa Tchatchoua had season-ending surgery to repair multiple ligaments in his left knee. The 6-foot-8 junior post, known as “Everyday Jon” because of his high-energy approach to games and practices, got injured in their win Saturday over No. 20 Texas.

Baylor got outrebounded 41-30, gave up 21 second-chance points and was outscored 28-22 in the paint.

“Everybody’s just got to pick it up,” Drew said of the rebounding. “ We haven’t had much time to practice since Jon’s been gone. It’s going to take some time to adjust. It’s kind of like starting over. We've had so many guys come and go.”

The Red Raiders were down 39-32 at halftime, missing their last five shots after Arms scored with 6:59 let to tie the game at 23-all. Sochan then hit a tiebreaking 3-pointer for the Bears. Texas Tech did make nine free throws in that closing stretch.

As for his halftime talk, Adams said, “what's important is not what I said, but how they responded. And this team is very resilient.”

Baylor: The loss last month to the Red Raiders started an 11-game stretch in which the Bears are 6-5. ... Baylor and Texas Tech are now tied for second place in the Big 12, a game behind No. 6 Kansas.

Texas Tech: It was the 31st career double-double for Obanor, but the first at Texas Tech for the 6-foot-8 senior transfer from Oral Roberts. Obanor missed his only two 3-pointers before halftime, but was 4 for 5 after that. ... Tech was without starting guard Kevin McCullar, out with a sprained left ankle. After missing a shot in Saturday’s win over TCU, McCullar stepped on the foot of Horned Frogs coach Jamie Dixon.

Baylor: Goes for a regular-season sweep when hosting TCU on Saturday. The Bears won 76-64 in Fort Worth on Jan. 8.

Texas Tech: At No. 20 Texas on Saturday, in Red Raiders' second game against former coach Chris Beard. Tech won the first meeting 77-64 in Lubbock on Feb. 1.