OBJ on his future with Browns: 'I'm not going anywhere' 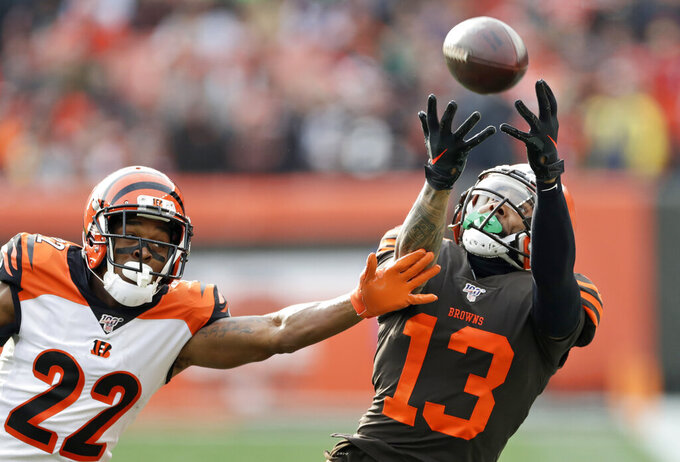 He's not leaving the Browns. Not now anyway.

Tired about speculation over his future, the flashy wide receiver emphatically said Wednesday he's not looking to get out of Cleveland after just one frustrating season.

After reports over the past several weeks saying he was unhappy and had been telling other teams to “come get me” during games, Beckham stopped the conjecture by insisting that he's committed to helping the Browns win.

“It’s done. It’s over with,” Beckham said to reporters. “I’m not going anywhere. I’ll be here. We’re going to figure this thing out. It’s just too special to leave.”

Beckham's first season with the Browns (6-8) hasn't gone the way anyone expected.

The three-time Pro Bowler isn't delivering the kind of big plays — he has just two touchdown catches — that made him a household name in New York as one of the NFL's most dynamic players. He hasn't developed chemistry with quarterback Baker Mayfield. And he has played with a sports hernia all season.

There have been numerous other off-the-field distractions that have prevented Mayfield and the Browns from fulfilling expectations.

But although the losing has taken a toll on Beckham, he's not giving up on playing alongside close friend and former LSU teammate Jarvis Landry, and he remains convinced Cleveland has the pieces to be a Super Bowl contender.

“Yeah, we are going to be here," he said when asked if he'll be with the Browns next season. “We are going to do it again and we are going to be what we felt like we should have been, correct all the little mistakes and all the 'if we would have did this’ games. It is just too good. I did not buy a house here to sell it.

"I know people have said ‘I did not sign him to trade him’ before, but I did not really buy a house here to up and leave it and do renovations on a house and build a doghouse.”

Reports have emerged saying Beckham asked other players to get him out of Cleveland. He chalked those up to him being a convenient target.

“It’s just easy to talk about. It’s a cop-out,” he said. “It’s an easy thing to do and cause a little controversy and a little friction and I feel like with my experiences in the league, and kind of going through the troubles that I did, it will never bother me, it’s never going to affect me, but it will cause a little friction between you and a teammate who doesn’t necessarily know what it is you’re thinking so.

Beckham was in a jovial mode when he met with reporters. He began his interview session by joking that he had had “great conversations” with the Winnipeg Blue Bombers and Toronto Argonauts of the CFL about possibly joining them.

The 27-year-old Beckham, who is under contract through 2023, said he felt the need to quash the rumblings about his plans because they were having a negative effect on the Browns. He said his words have been twisted.

“It was starting to get out of hand,” he said. “Like when I come up here, answer and say I do not know my future, we take it and it is like, ‘Oh well he did not say … What did he not say?’ Stop trying to listen too deeply on what is being said and take the message for what it was. I do not know the future. I do not know if we are going to be alive next year. I do not know what is going to happen. I don’t predict the future.”

Landry, too, tried to set the record straight after a report that said he told Arizona Cardinals players to “come get me” during Cleveland 38-24 loss on Sunday.

“I would never say nothing like that,” said Landry, who was named to his fifth Pro Bowl. "I think that the passion and the team I play for, they trust and know my heart and know that I’m in this and I would never look to another team during a game, especially that we’re losing and say ‘come get me’ with a worse record than we have.

“It’s all about clicks now and I get it, but at the end of the day, don’t try to slander my name. If you didn’t hear me say it directly, you shouldn’t have to be able to report about it.”

NOTES: DT Sheldon Richardson, C JC Tretter and DE Olivier Vernon all sat out practice as the Browns prepare to face the Baltimore Ravens (12-2), who have won 10 straight since Cleveland beat them in September.