OBJ questionable, Clowney back as Browns ready for KC opener 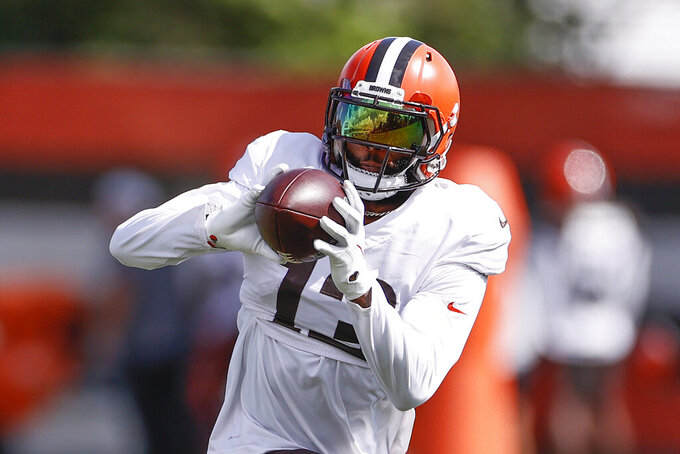 Beckham, who has mounted a quicker-than-projected comeback from knee surgery, was limited in practice Friday and coach Kevin Stefanski said the star wide receiver is questionable to face the AFC champion Chiefs.

“We'll use the next 48 hours with all these guys and determine who’s playing and who’s not,” Stefanski said following practice while sticking to his preference to be vague with injuries. "We’ll let you know 90 minutes before the game.”

All signs point to Beckham playing for the first time since he tore his left anterior cruciate ligament in an Oct. 25 game at Cincinnati, an injury that prematurely ended his second season with the Browns. Beckham has looked like himself in drills, going first among the group, cutting sharply and showing the game-breaking speed that separates him from many NFL receivers.

Stefanski said Beckham has hit every benchmark and has not had any setbacks. He's also not taken a hit on his reconstructed knee after being held out of the preseason.

“All the guys that are rehabbing from any injury, we make sure we follow the medical advice and go through the rehab process like that,” Stefanski said. “So he’s no different.”

Despite numerous requests, Beckham hasn't talked to reporters since training camp opened in July. Since getting hurt and missing out on Cleveland's playoff run last season, the only time Beckham has spoken to the local media was briefly on July 25 at his youth football camp.

As for Clowney, he returned to practice after missing two days with an unspecified illness and is expected make his debut with Cleveland on Sunday.

Clowney, who signed a one-year, $8 million free agent contract in the offseason, was not with the team earlier this week. Stefanski said the absence was not COVID-19 related.

Clowney went through pre-practice stretching and individual drills during the portion of the workout open to media members.

“He obviously was sick, so good getting him back in here," Stefanski said. "It was nice seeing him out there at practice.”

A three-time Pro Bowler, Clowney will likely line up on the side opposite All-Pro end Myles Garrett, a fellow No. 1 overall draft pick who was having his best year as a pro last season before he contracted the coronavirus.

Garrett said he wasn't worried about Clowney missing this week, and he's relieved to have him back.

“I am going to go out there and do what I do regardless,” he said. "I am sure glad that he is back — will never sell that short. I was not playing with Clowney last year or my first three years so if anything happens, I am not going to be afraid to take on the challenge with the rest of the guys in the locker room because I know they are just as prepared.”

Along with Beckham, the Browns listed starting center JC Tretter (knee), safeties Grant Delpit (hamstring) and Ronnie Harrison Jr. (ankle) as questionable. Harrison was the only one who was a full participant in practice.

NOTES: K Chase McLaughlin was added to the injury report with a right hamstring issue. ... RB Kareem Hunt said he expected to have a larger role in the Jan. 17 playoff loss to the Chiefs, his former team. Hunt had just six carries for 32 yards and a touchdown. He had one catch for 2 yards. "That’s last year. I’m taking about now," he said. ... A Cleveland native, Hunt has enjoyed seeing the city's excitement for the 2021 season. “We used to be looking forward to going 0-16 or getting one win,” he said. “Now it’s high expectations around here.”