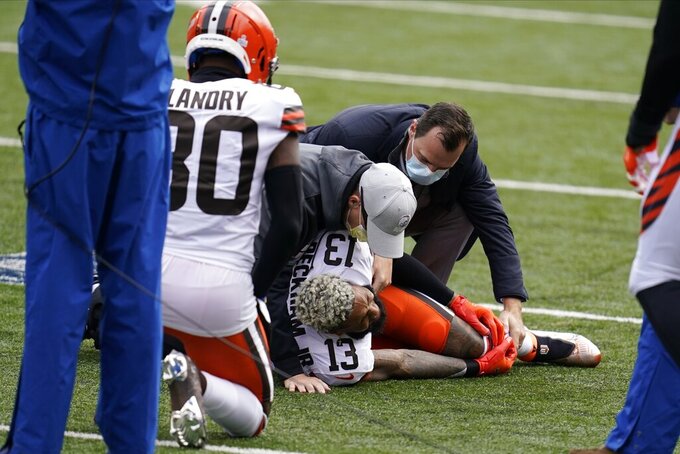 Cleveland Browns' Odell Beckham Jr. (13) is examined during the first half of an NFL football game against the Cincinnati Bengals, Sunday, Oct. 25, 2020, in Cincinnati. Browns star wide receiver Odell Beckham Jr. will miss the rest of the season after tearing a knee ligament during Sunday's 37-34 win at Cincinnati. (AP Photo/Michael Conroy) 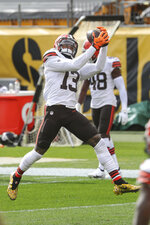 CLEVELAND (AP) — Odell Beckham Jr. has knee surgery scheduled next week. For now, the Browns have him penciled into their plans well beyond that.

The star receiver, who suffered a season-ending knee injury in an Oct. 25 game at Cincinnati, will have his torn anterior cruciate ligament repaired and will likely need up to one year to recover.

Andrew Berry, Cleveland's general manager and executive vice president, said Wednesday on a Zoom call that Beckham will have the procedure “early next week.”

Beckham's injury and long-term rehab have prompted questions about whether the three-time Pro Bowler — and one of the NFL's best deep threats — has played his last game with the Browns.

It's a subject Berry has dealt with since returning to the club's front office earlier this year. Berry has repeatedly said he values Beckham — and nothing has changed his stance.

“I feel like this is a question I’ve literally addressed every week since I took the job,” Berry said when asked if he sees Beckham as part of the Browns' long-term plans. “So really at this point in time, I really don’t see a difference. To me, I feel like I’ve answered this question enough.

“I can’t control what the outside noise says.”

After dealing with an injury for much of 2019, Beckham was playing well in his second season with Cleveland, which acquired him in a trade from the New York Giants in March of last year.

There has always been speculation — some of it driven by Beckham’s behavior — about his fit with the Browns, but Berry indicated he's happy to have Beckham on his roster.

“Odell is one of the best receivers in the NFL,” he said. “He played really good football for us before he was injured. He’s done a fantastic job with his teammates at practice, he’s embraced the organization, he’s under contract for multiple years.

“So our focus with Odell is making sure he recovers from the ACL tear. We want him to be healthy and ready to go next year. But we’re pleased with him.”

Beckham got hurt while trying to make a tackle after a pass from Baker Mayfield intended for him was underthrown and intercepted. Beckham's foot got caught in the turf and his knee bent awkwardly as he tried to make a tackle.

It's the latest injury for Beckham, who has missed 25 games over the past four seasons with a variety of medical issues.

The Browns can't cut him while he's hurt. They can try to trade him, but Berry has given no indication he's leaning that way.

Beckham, who had surgery on a core muscle injury in January, finished with 23 catches for 319 yards and three touchdowns. He also had a 50-yard rushing TD.

His injury is a severe blow to the Browns (5-3), who have a chance to end their 18-year playoff drought. After the bye, Cleveland hosts Houston on Nov. 15.

“Odell is one of the best receivers in the league,” Berry said. "A loss of a player of that caliber, you do not just realistically fully replace (with one player). It will take a bit of a committee approach. I like the guys we have in the receiver room.

"I thought we saw their potential with their ability to step up against Cincinnati two weeks ago. It really will take a next-man-up mentality and guys playing to their strengths and continuing to step up and produce because Odell is not coming back this year.”

NOTES: The Browns had their last practice of the bye week. Coach Kevin Stefanski is giving his players the next few days off. ... TE Austin Hooper practiced for the first time since having his appendix removed and missing two games. He appears on track to play against the Texans. ... DE Myles Garrett, who hurt his knee on Sunday against Las Vegas, only rode a stationary bike during the portion of practice open to media members.