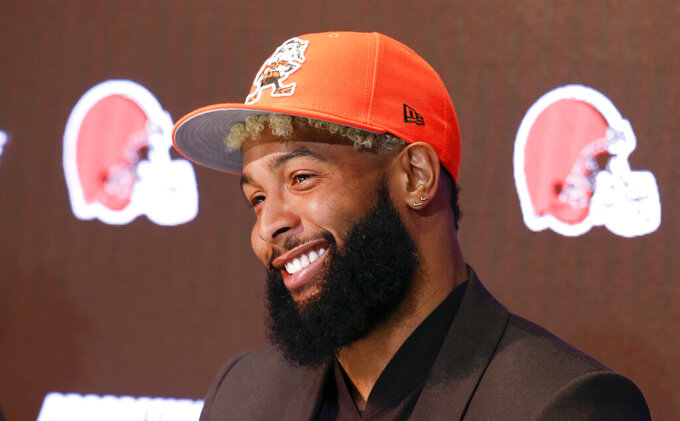 FILE - In this April 1, 2019, file photo, Cleveland Browns' Odell Beckham answers questions during an NFL football news conference in Berea, Ohio. The star wide receiver reported to the team’s headquarters Monday and is on the field Tuesday, May 14, 2019, for practice. (AP Photo/Ron Schwane, File)

Beckham, who was acquired in a blockbuster trade with the New York Giants in March, had drawn local and national criticism for not taking part in the team's offseason program, which included an extra session because the Browns have a new coach, Freddie Kitchens.

A three-time Pro Bowler, Beckham spent one day in Cleveland for his introductory news conference on April 1 before leaving for vacation, to work out in California and to attend to personal business. He posted videos of his workouts in Los Angeles on Instagram in an attempt to show his commitment and counteract any negativity.

Kitchens even offered public support to the 26-year-old, saying he was confident Beckham would stay in shape. Kitchens stayed in contact with Beckham while he was away.

"There's no problem with Odell not being here," Kitchens said on April 27. "I'd rather him be here. He's not here. It's voluntary. That's what the word 'voluntary' means. He can decide to come or he can't. But under no circumstance am I going to say that I'm pissed off at Odell for not being here. He'll be ready to play and ultimately that's the only thing I want, for him to be ready to play when we start kicking off in September and he will be — I promise you."

Tuesday's practice was closed to the media, but Wednesday's will be open. The Browns will practice 10 times over the next three weeks, and it's not known if Beckham will stay around to participate in all of them.

Beckham's arrival in Cleveland, where he'll join quarterback Baker Mayfield and good friend Jarvis Landry, has driven up expectations for the Browns, who went 7-8-1 last season.