Offense, defense come together as Chiefs roll toward LA 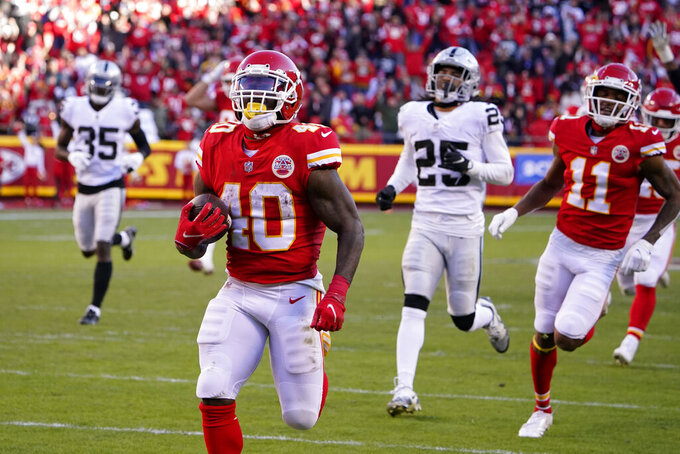 Kansas City Chiefs running back Derrick Gore (40) runs for a 51-yard touchdown during the second half of an NFL football game against the Las Vegas Raiders Sunday, Dec. 12, 2021, in Kansas City, Mo. (AP Photo/Ed Zurga)

KANSAS CITY, Mo. (AP) — Folks around the NFL have been wondering the past few weeks what the Kansas City Chiefs would look like if they could marry their suddenly stingy defense with their traditionally prolific offense.

The Raiders had the misfortune of finding out Sunday.

The Chiefs' defense forced five turnovers, their offense turned them into 28 points, and Patrick Mahomes and Co. cruised the rest of the way to a 48-9 victory — the largest margin in 126 games against their old AFL rivals.

It kept the Chiefs (9-4) one game ahead of the Chargers (8-5) heading into their Thursday night showdown in Los Angeles.

“We're playing a good football team this next week that we've already played once this season,” said Mahomes, who threw two touchdown passes against Las Vegas. “We have familiarity with them. We still have to go out and do it. The defense is playing good football right now. Offensively, we're proving we can drive the length of the field.”

They did that with aplomb on Sunday.

The Chiefs already led 7-0 thanks to Mike Hughes' fumble return touchdown on the game's first play when Mahomes led them on an 80-yard touchdown march. He followed with another 80-yard TD drive a few minutes later, then needed to go just 39 yards for a third touchdown in three series, and a 28-0 lead.

Kansas City added another touchdown before halftime, along with a couple field goals by Harrison Butker and Frank Gore's 51-yard touchdown scamper, to surpass the previous record margin of 35 points against the Raiders set in 1960 — the first year of the rivalry in the AFL.

The Chiefs finished plus-5 in turnovers. They gained 372 yards while surrendering 290, held Josh Jacobs to 24 yards rushing and sacked Derek Carr four times. They were 9 of 13 on third downs, averaged 6.5 yards per play and punted once.

In short, the defense continued its midseason surge while the offense finally showed up again.

“Listen, I'm proud of the way the guys are playing," said Andy Reid, who became the third Chiefs coach to win 100 games for the organization. “It doesn't matter if you're up or down; you have to keep going. Consistency becomes important.”

Especially given what's at stake against the Chargers on Thursday night.

Mahomes showed signs of coming out of his midseason funk, throwing his first two TD passes since mid-November. He was 20 of 24 for 258 yards against Las Vegas while scrambling for another 20 in a confidence-boosting performance.

The offensive line has been excellent all season, but it struggled at certain points on Sunday. Mahomes was sacked three times and fill-in right tackle Andrew Wylie continues to get beaten. He's been starting in place of Mike Remmers, who is on injured reserve, and Lucas Niang, who has been dealing with a rib injury.

Defensive back Hughes caused two fumbles and returned one for a touchdown while leading the Chiefs with nine tackles. He got considerably more playing time because starting cornerback L'Jarius Sneed, whose brother was killed over the weekend, remained with his family in his native Louisiana.

Demarcus Robinson continues to slide down the wide receiver pecking list in Kansas City. He didn't have a single target while Tyreek Hill, Travis Kelce, Mecole Hardman all caught passes. So did Josh Gordon, who scored his first touchdown since he was catching passes from Tom Brady in New England a couple years ago.

3 — The Chiefs have held three consecutive opponents to nine points apiece. That ties the second-longest streak of holding teams to fewer than 10 in a single season; the record is five games set in 1968. The Chiefs also have held six straight teams to 17 points or fewer, the longest active streak in the NFL.

Defensive back Rashad Fenton was active after missing time with a knee injury, though the Chiefs elected to hold him out in advance of their crucial game against Los Angeles. Otherwise, they are about as healthy as they've been all season.

The Chiefs lost to the Chargers earlier this season, so losing the return game Thursday night not only leave the two teams tied atop the AFC West but also give Los Angeles the tiebreaker with three games remaining.