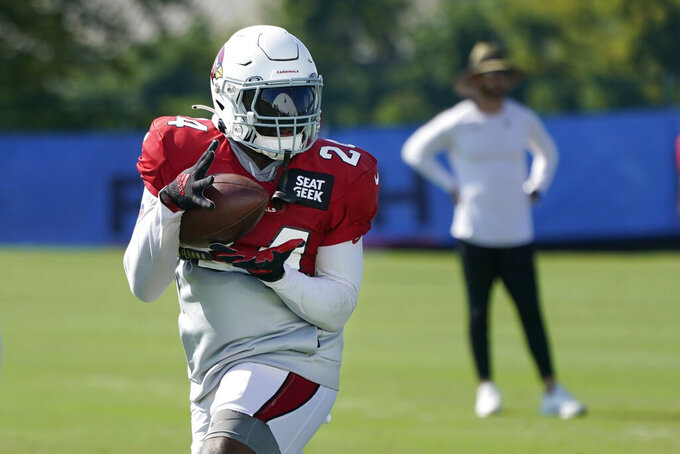 NASHVILLE, Tenn. (AP) — The Tennessee Titans and Arizona Cardinals tried to make the most of their one practice against each other on Wednesday.

The teams held a joint practice ahead of Saturday night’s preseason game. They had agreed to cut their two scheduled workouts to one and limited that session to one-on-one drills and a two-minute team period at the end of practice. Both teams will practice separately on Thursday.

Neither Tennessee's nor Arizona’s first-team offenses scored a touchdown during the team period. The only scores in the drill belonged to the Cardinals, whose second unit got a TD when backup quarterback Trace McSorley hit rookie receiver Jontre Kirklin in the flat. Titans cornerback Chris Jackson slipped while trying to make the stop, there was no help behind and Kirklin went untouched into the end zone.

That came after the Titans’ second-team offense committed a turnover as Cardinals safety Tae Daley intercepted Malik Willis' pass and returned it for a score.

The Titans’ first-team offense did not score on either attempt. One possession ended when Arizona’s Byron Murphy got in front of Racey McMath as he went up for the football and picked off Ryan Tannehill’s end zone pass.

“I thought that there was some good stuff. I thought that seven-on-seven was good," Titans coach Mike Vrabel said. "Down there in the red zone in the one-on-ones, it’s the same stuff, and we just have to realize, it’s going to be contested.

"The offenses didn’t do much there in the two-minute. We’ll have to figure that out.”

Arizona’s first-team offense didn’t fare much better. While the Cardinals did not have any turnovers, they struggled gaining yards against the Titans defense in the two-minute as Kyler Murray was forced to throw check-downs and underneath routes. He scrambled just once on two drives.

Cardinals coach Kliff Kingsbury came away pleased with the work, even in team drills. He said that having NFL officials on hand for practice was good, even if a few penalties hurt Arizona in the period. One penalty in two-minute caused a 10-second runoff that exhausted the clock.

“We got what we wanted out of it," Kingsbury said. “Had some tough penalties called which we’ve got to get cleaned up. But I think just the operation, to have a real NFL officiating crew and working against another team was good for us.”

NOTES: Titans running back Derrick Henry worked in team drills for the first time in at least two weeks. He had two carries against the Tennessee defense and looked smooth in running off-tackle on a pair of carries in the period. “He’s been all for whatever it is that we decide is best for him and the team,” Vrabel said of Henry. ... Cardinals wide receiver DeAndre Hopkins, who is suspended for this season's first six games for violating the NFL’s policy on performance-enhancers, got in some work during the joint practice. Hopkins got past Titans cornerback Caleb Farley to make one play. … Titans rookie punter Ryan Stonehouse, trying to unseat veteran Brett Kern, had nearly all his punts in the period go for 55-plus yards. … Nicholas Petit-Frere continued to get first-team reps at right tackle for the second consecutive practice. ... The Titans acquired defensive back Ugo Amadi and a seventh-round pick in the 2024 draft from the Philadelphia Eagles for a sixth-round pick in 2024. ... The Titans also placed linebacker Monty Rice on the PUP list.