Offensive line a priority as Chargers, Telesco go into draft 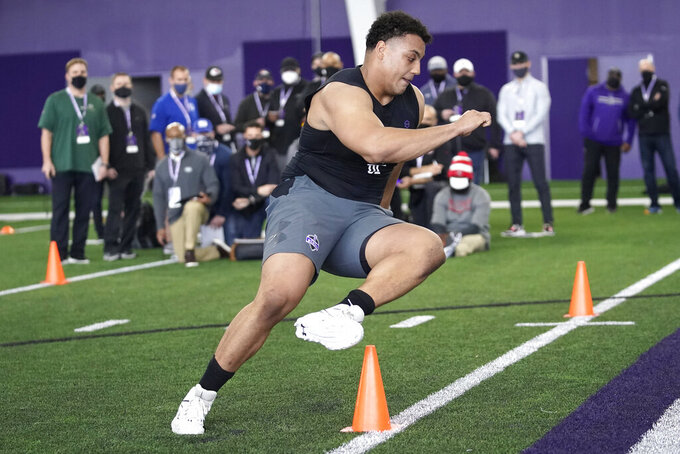 FILE - Northwestern offensive lineman Rashawn Slater, participates in the school's Pro Day football workout for NFL scouts Tuesday, March 9, 2021, in Evanston, Ill. The acquisition of Sam Darnold via trade earlier this month has given the Carolina Panthers more options with the No. 8 pick in the NFL draft. Carolina's most pressing need entering the draft is at left tackle, a position they have failed to solidify over the last seven seasons. (AP Photo/Charles Rex Arbogast, File)

COSTA MESA, Calif. (AP) — Tom Telesco won't admit it, but the general manager is starting to feel increased pressure as he approaches his ninth draft with the Los Angeles Chargers.

While Telesco has hit the jackpot with first-round selections in recent seasons, including Offensive Rookie of the Year Justin Herbert last year, he has struggled to draft and develop offensive linemen and cornerbacks. Those are the top two positions of need for the Chargers, who have the 13th overall selection in the first round.

The Chargers have drafted seven offensive linemen since 2016, but only two remain on the roster, with neither currently projected as a starter. After a year when Herbert was under constant duress, the Chargers signed three linemen during free agency, including making Corey Linsley the highest-paid center in the league. However, Los Angeles still needs to find a starting left tackle and also add a swing tackle. Luckily for the team, this is a draft that has plenty of depth at offensive tackle.

If Los Angeles remains at 13, it should be in a good position to grab one of the top three prospects. Oregon's Penei Sewell and Northwestern's Rashawn Slater have been the consensus top two, but the Chargers have also extensively scouted Virginia Tech's Christian Darrisaw. All three have graded out as strong pass blockers.

Right tackle Bryan Bulaga is the only starter back from last year, but he missed six games and left in the first half of three others due to injury.

“I think that’s why no matter where they’re drafted, and if they have to start as rookies, you really have to project and really know that this player is going to get a lot better. How they start is not how they’re going to finish,” Staley said. "It’s really incumbent upon us to coach them really well and have a good plan to help them be as good as they can be.”

Los Angeles will have nine picks in the draft, which is its most since it had 11 in 2004. It has a compensatory third-round pick after Philip Rivers signed with Indianapolis and an extra sixth after Desmond King was traded to Tennessee.

Staley is the third coach Telesco has hired; Anthony Lynn was fired in January. In Telesco’s eight seasons, the Chargers have reached the playoffs twice and gotten double-digit wins only once. Even though they ended last season on a four-game winning streak, the Chargers were under .500 for the second straight season and third time in the past five years.

Edge rusher Joey Bosa and wide receiver Mike Williams are the only players still on the roster from the 2016 and '17 draft classes. The bigger concern might be with the 2019 class, which has hardly made an impact through two seasons.

Defensive end Jerry Tillery, the first-round pick that year, had 30 tackles last season but was also credited with nine missed stops. He was called for eight penalties, including five that led to first downs.

The one position that could trump the Chargers' glaring need at left tackle is cornerback. They re-signed Michael Davis and have Chris Harris Jr.,, but Harris projects more as a slot cornerback. With not many defensive players projected to go in the top half of the first round, Alabama's Patrick Surtain and South Carolina's Jaycee Horn could be available.

Expect the Chargers to also address safety either late on the second day or during rounds 4-7. They lost Rashawn Jenkins in free agency and Derwin James is coming back after missing last season due to a knee injury.

The Chargers have a lot of options at receiver, but Williams is going into the final year of his contract. If Alabama's Jaylen Waddle or DeVonta Smith is still available at 13, that could be an option.

“We are very comfortable at 13. You know, if we were in the 20s or 30s, that’s a little more difficult because typically nobody has that many players graded as first-round picks," Telesco said.

The Chargers take a punter or kicker on the final day. Ty Long was last in the league in net punting average and had a league-high three punts blocked last season. Kicker is also a concern after Michael Badgley could not make a field goal beyond 45 yards in 2020.