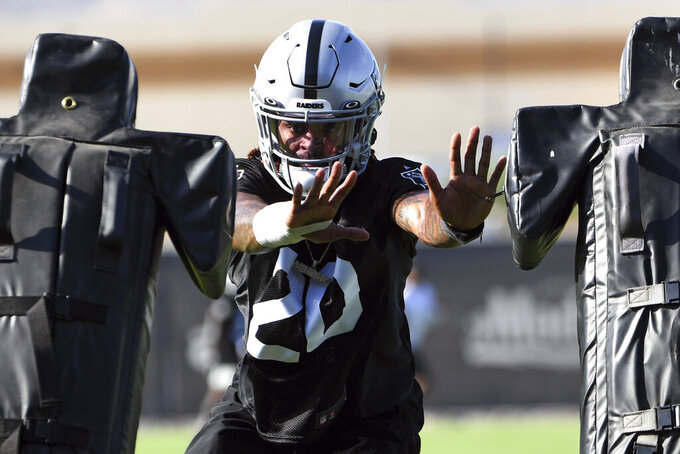 HENDERSON, Nev. (AP) — Las Vegas Raiders quarterback Derek Carr likes to do most of his bonding and chemistry building with teammates prior to the start of each season.

Informal workouts, inviting them to his house, personal conversations. Anything that eases the transition from offseason to training camp.

With Andre James stepping in as the starting center this season, it was Carr who got an invite from the guy who will be snapping the ball to him hundreds of times this season.

“The steaks they cook over at the O-line place are a little different than the one’s I eat,” Carr said laughingly after Tuesday’s first day of training camp. “But it’s been a great relationship so far.”

It must have been a dynamite steak, considering Carr’s complimentary words and the fact James has started only one game in his career and has been on the field for just 116 offensive snaps in two seasons with the Raiders.

“We had some good ol’ Tomahawk Wagyu, smoked a 16-pound brisket for 12 hours,” James said. “It was a good little hoorah before we start this camp up.”

James replaces one of the best at his craft, three-time Pro Bowler Rodney Hudson, who was sent to Arizona in March along with a seventh-round pick, in exchange for a third-round selection.

But it’s the type of camaraderie Carr insists on building each offseason, like last summer during the pandemic when the veteran quarterback held impromptu workouts at a local park, that has the James confident the offense is in good hands.

“You look at the guys that are there at the park training, it’s guys that are out there playing on Sunday,” said the third-year lineman out of UCLA. “It means something to them. To wake up at six o’clock in the morning on a Wednesday in the offseason, to beat the heat and get out there on the field, it shows a lot for how bad you want this.”

Though he has a rather young receiving corps, Carr said it’s been nice to have carryover with a majority of his receivers, many of whom he’s already built a rapport with and who he knows and understands their nuances, and how they cut and execute routes in the playbook.

With Hunter Renfrow, Zay Jones, Bryan Edwards and Henry Ruggs III all expected to contribute, adding John Brown and Willie Snead IV into the receiving corps has been a seamless transition as well.

“I think our relationships are super strong, so I’m excited about it,” Carr said.

NOTES: Running back Kenyan Drake was placed on the non-football injury list. Drake was on the practice field Wednesday, working with a trainer on the side. Fellow running backs Jalen Richard and Theo Riddick were the only players absent, and have been placed on the COVID-19 list.