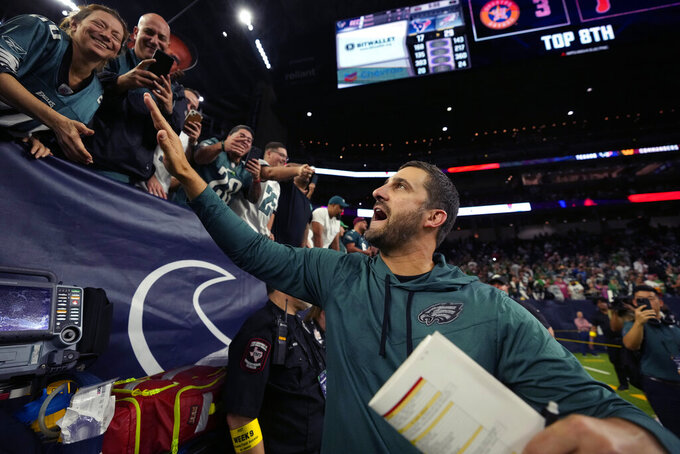 When the Philadelphia Eagles left Tampa Bay following a playoff loss last January, they looked like they didn’t belong on the field with the Buccaneers and the NFL’s elite teams.

Now, they’re the only unbeaten club in football.

The Eagles have followed up general manager Howie Roseman’s impressive offseason with an even better performance on the field through eight games. They’re 8-0 for the first time in franchise history after beating the Houston Texans 29-17 on Thursday night.

Jalen Hurts has taken a giant leap this season, proving he’s a quarterback the team can build around for the future.

Nick Sirianni has pushed all the right buttons in his second season as a head coach and is finding ways to maximize the talent on the team.

Defensive coordinator Jonathan Gannon has taken a revamped unit and turned it into one of the league’s best.

It started with Roseman making all the right decisions to build the roster after Philadelphia overcame a poor start in 2021, finished 9-8 and earned a wild-card playoff berth in what was supposed to be a rebuilding year.

A 31-15 loss to Tom Brady and the Buccaneers that wasn’t even as close as the final score made it clear the Eagles had a long way to go to become a championship contender.

Nobody expected it to happen this quickly.

Brown has been a difference-maker on offense, helping Hurts go from being a playmaker who is best when he’s on the run to a guy who can stay in the pocket and pick defenses apart with his arm.

Brown’s presence has taken pressure off 2021 first-round pick DeVonta Smith and allowed him to settle into the No. 2 wide receiver role.

Roseman’s strategy of emphasizing the offensive and defensive lines in the draft has produced solid, deep units on both sides of the ball.

“There’s a lot to reflect on and look at the things we did well but there’s also a lot of things we can improve on,” Hurts said. “We have a standard of play and we want to play to that at all times.”

Hurts doesn’t ever seem satisfied after wins. He knows the team can perform at an even higher level.

“It’s a learning experience for us. It’s a formative experience that will only build us up,” Hurts said. “I truly think the only direction is to rise. ... I think the job is still not done. I talk about there never being an arrival, there only being a journey. That’s something that I embrace, it’s something that this football team embraces. The journey of what’s ahead. The journey of daily deposits and daily improvement and daily efforts to be the best football team we can be. That’s the only thing we want to do. It’s all about the standard, playing to that standard, then raising the standard.”

Looking ahead at Philadelphia’s schedule, it’s hard to predict their first loss. The Eagles host the Washington Commanders (4-4) on Monday night Nov. 14. They visit Indianapolis (3-4-1) and then host Green Bay (3-5) and Tennessee (5-2). They’ll face the Giants (6-2) and Cowboys (6-2) three times in the final five games.

“It’s not easy to win in this league,” running back Miles Sanders said. “We’re happy to have eight out of the way but we’re on to bigger and better things. Still trying to take it one game at a time. It’s still a long rest of the season and a division game coming up and we got a lot of stuff to focus on more than being 8-0.”

The 1972 Miami Dolphins are the only NFL team to have a perfect season. The 2007 New England Patriots won the most games before losing, going 18-0 until losing in the Super Bowl.

The Eagles are a long way from entering that conversation but even being at this point seemed improbable at at the end of last season.