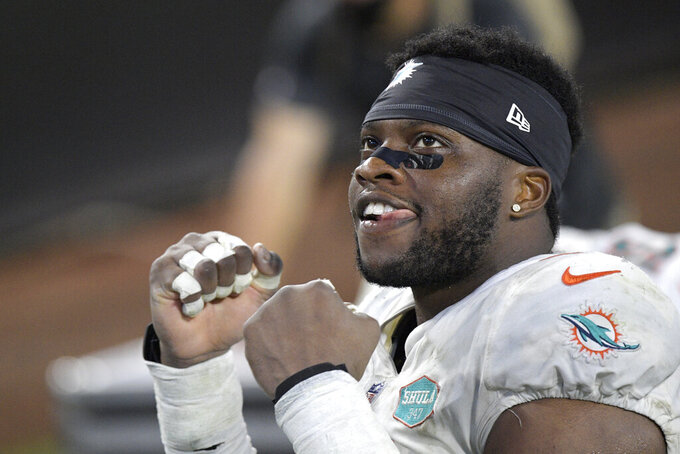 Miami Dolphins defensive end Emmanuel Ogbah (91) walks off the field after an NFL football game against the Jacksonville Jaguars, Thursday, Sept. 24, 2020, in Jacksonville, Fla. Ogbah is leading the charge for the Miami Dolphins’ defense. He has become a playmaker for a disruptive unit that ranks second in the NFL in takeaways per game and fourth in points allowed. (AP Photo/Phelan M. Ebenhack)

MIAMI (AP) — Emmanuel Ogbah is leading the charge for the Miami Dolphins’ disruptive defense, motivated by a desire to stay put.

“I’ve been around,” Ogbah said with a chuckle. “I’ve been on three teams in five years. I’m tired of moving.”

A breakout season has the Dolphins keen to keep him around. Ogbah is tied for fourth in the NFL with a career-high eight sacks, and has had at least one in each of the past six games while twice forcing fumbles that teammates returned for touchdowns.

He's a playmaker on a unit ranked second in the NFL in takeaways per game and fourth in points allowed. While the focus in Miami has been on rookie quarterback Tua Tagovailoa, it is dramatic defensive improvement that has fueled a surprising surge by the Dolphins (6-3) into playoff contention.

Five veteran newcomers start for coach Brian Flores' defense, and none has made a bigger impact than Ogbah, who signed a $15 million, two-year deal in March that now looks like a bargain for the Dolphins.

Ogbah's job title is end, but he's used in a variety of ways on a defense that has thrived through its unpredictability.

“He has shown ability to be multiple, and we can move him around,” defensive coordinator Josh Boyer said. “He does a lot of things for us. He can set the edge, he can handle double-teams, he can rush the passer, he can rush the passer individually, he can do it with stunts. There are a lot of things he does for us that probably don't get noticed."

Ten Dolphins have at least one sack this year, in part because foes are focused on Ogbah, as cornerback Nik Needham noted after sacking the Chargers' Justin Herbert last week.

“When I came off the edge, the running back had his eyes locked on Ogbah,” Needham said. "That freed me up off the edge, and Herbert ran right up to me. He’s a dominant force out there for sure.”

At 27, he's also a late bloomer. The Nigeria native was considered a potential NFL star after making 12 1/2 sacks as a senior at Oklahoma State, and the Cleveland Browns took him in the second round of the 2016 draft. It took him three years to total 12 1/2 sacks for the Browns, where his injuries became an issue, and they traded him to the Kansas City Chiefs. He missed the final 2 1/2 months of their Super Bowl championship season last year with a torn chest muscle.

Last offseason he tried to tame the roller coaster by getting in better shape, spending some of his free agent earnings on better nutrition, acupuncture, massages and cryotherapy.