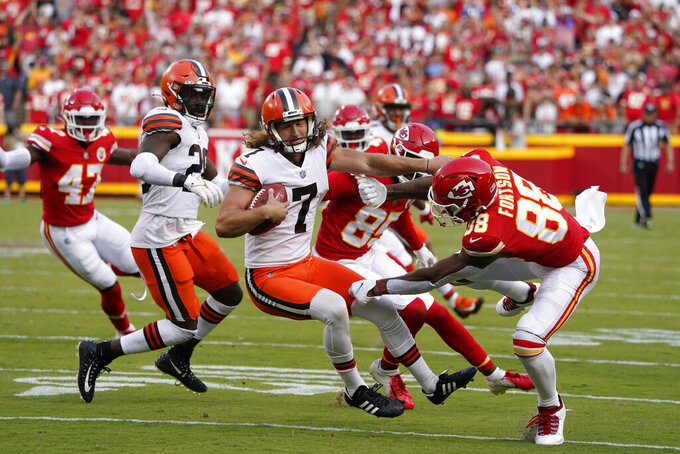 Cleveland Browns punter Jamie Gillan (7) runs with the ball after muffing a punt attempt during the second half of an NFL football game against the Kansas City Chiefs Sunday, Sept. 12, 2021, in Kansas City, Mo. (AP Photo/Ed Zurga)

BEREA, Ohio (AP) — Browns punter Jamie Gillan spent the summer catching footballs fired at him from a machine during practice. He snagged thousands.

Last Sunday, he couldn't handle one that counted.

Gillan failed to catch a snap in the fourth quarter of the opener at Kansas City, and then made matters worse when he tried to run for a first down and was tackled, sending the Browns to a 33-29 loss to the Chiefs.

Browns special teams coordinator Mike Priefer was at a loss to explain what happened.

Gillan's gaffe — one of three crucial mistakes by Cleveland in the second half — gave the Chiefs possession at the 15-yard line and they quickly scored a touchdown to expand their lead with 7:04 remaining.

Gillan, nicknamed “The Scottish Hammer” because of the way he can punish a football with his left foot, hasn't spoken to reporters since his fateful flub. Priefer said the 24-year-old, who is in his third season with Cleveland, was distraught following the game.

“Devastated,” Priefer said. “We all were. We all were for him and for our football team.”

It may not have helped Gillan that the Browns offense had played so well that he wasn't attempting his first punt of the season until the fourth quarter. With the Chiefs rallying, Arrowhead Stadium was quaking with noise.

However, Priefer offered no excuses and said Gillan isn't running from accountability.

“We talked about it a little bit on the airplane and he had really no excuse, no excuse why he dropped it,” Priefer said as the Browns prepared for this week's home opener against the Houston Texans. “He’s not an excuse-maker, he’s a standup guy and he knows he’s got to perform at a high level and keep being a weapon for our football team, and it starts this Sunday.”

Even after Gillan scooped up his fumble, Priefer said he still had time to punt it. Gillan, though, tucked it under his arm the way he used to while playing rugby and took off running to his right before being brought down.

That was his second error.

“If anything, go left,” Priefer said. “We work on similar things, like if the ball goes over his head, he circles back this way so he can scoop it up and then punt with his left foot. We talk about different situations — bad snaps or dropped snaps.”

The Browns may discuss those things, but they don't work on them.

“I don’t like to practice failure,” Priefer said. "I’m being serious, like a fire call on a field goal. We muff a field goal snap, we talk about it, we might walk through it, but we never want to actually practice that exact situation because to me if you’re practicing a dropped snap, you’re practicing failure.

“Do we talk about those things? Of course, and we cover the different situations.”

Despite Gillan's costly play, Priefer hasn't lost any confidence in him.

“Not at all,” he said. "He's got great hands. He’s a great athlete. He wasn’t a holder until he got here and he became a really good holder. I can’t explain why he dropped it.”

NOTES: Starting RT Jack Conklin (knee) was back at practice after missing Wednesday. However, starting LT Jedrick Wills Jr. (ankle) remains sidelined along with his backup, Chris Hubbard (triceps). If they can't play, rookie James Hudson III will make his first NFL start. ... C JC Tretter (knee) was also held out but probably more as a precaution. ... LB Anthony Walker Jr. (hamstring) was limited. ... S John Johnson III struggled with dehydration against the Chiefs and had a curious theory why. “Honestly, I think it is like the socks that we have to wear,” he said. “The NFL mandates you have to have your legs covered up, and I think that kind of plays a part in it. I do not know. I might be wrong.”