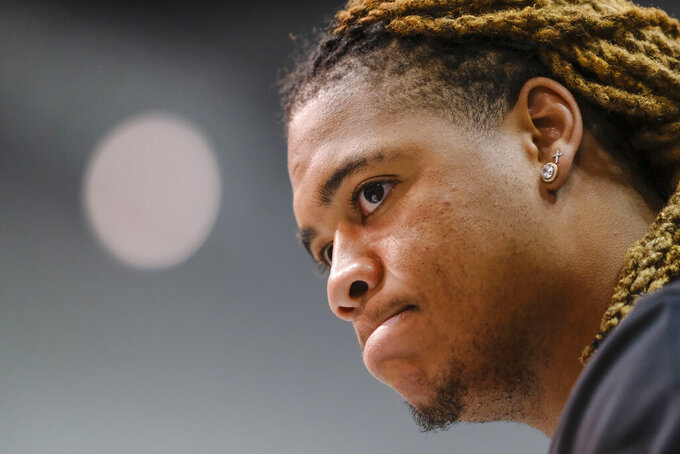 INDIANAPOLIS (AP) — Chase Young wants to follow in fellow Ohio State star Nick Bosa's NFL footsteps, and he probably won't have to wait all that long to start.

The freakishly athletic defensive end who's widely viewed as the best player coming out of college — just as Bosa was — figures to start off his pro career just as the 2019 NFL Defensive Rookie of the Year did: as the second selection in the draft behind a hot-shot, Heisman Trophy-winning quarterback.

Bosa helped lead the 49ers to the Super Bowl after he watched Arizona make Kyler Murray of Oklahoma the top overall pick in last year's draft.

"Nick, he's always setting the standard. That's just motivation for me to achieve a lot of real good things," Young said Thursday during his media session at the NFL scouting combine. "It's definitely been a blessing to watch him grow into the player that he is. He's definitely helped me along this passage. He hasn't stopped. I'm just grateful to be able to see him grow."

“It's going to be exciting,” Young said. “I'm definitely excited to play with the big dogs and excited to show the world what I can do."

Like Bosa 11 months ago, Young is the consensus cream of this year's crop, an All-Pro in waiting, said NFL Network draft analyst Daniel Jeremiah, who compares Young to Julius Peppers and Mario Williams.

Young is considered a generational talent, but Joe Burrow, who led LSU to the national title, is expected to be the No. 1 overall pick in the draft in April.

That selection is owned by the Cincinnati Bengals, and Burrow said this week he wouldn't have any qualms playing for them despite their lack of Super Bowl success.

Burrow grew up in Athens, Ohio, about 2½ hours away, and he cracked this week that he'd be able to head out for some home cooking now and again if Cincinnati indeed selects him.

Young would be even closer to his hometown if the Washington Redskins grab him at No. 2.

He was raised in Upper Marlboro, Maryland, about 10 miles from FedExField, where the Redskins play.

"Yeah, I always watch the Redskins, the hometown team," said Young, who insisted he wasn't a fan of the team as much as he was of certain players such as Clinton Portis or the late Sean Taylor.

"It'd mean a lot, playing in front of my hometown people, it'd definitely be a blessing," Young said. "Everybody who has known me since I was younger could come to a game and things like that. But right now, I'm not focused on who could draft me. I'm focused on being the best player, the best person, I could be and impress the coaches at the combine."

New Redskins coach Ron Rivera demurred this week when asked about selecting a generational talent such as Young with the second selection.

"Well, before we can do anything with the No. 2 pick, we got to see what happens with the No. 1 pick," Rivera said. "So once that pick goes 1, we'll go from there. But again, as I said, everything's an option."

Young is scheduled to meet with the Redskins on Friday, and Washington quarterback Dwayne Haskins, the Redskins' first-round pick out of Ohio State a year ago, definitely hopes things go so well that the 'Skins don't even consider trading the pick.

“Yeah, me and Dwayne talk all the time. I've known Dwayne since high school. He definitely loves the organization and obviously wants me to come play with him,” Young said. “We'll see how this whole thing turns out.”

Like many of the top players at their positions who don't need to impress teams physically at the combine this week, Young isn't going to showcase his skills during on-field drills at Lucas Oil Field with the rest of the defensive linemen Friday night.

Young said he'll do position drills at Ohio State's pro day instead, but he won't run the 40-yard dash there, either.

Bosa, who also avoided the combine workouts a year ago when he was coming off an injury, did impart some advice to Young.

“He just told me to be myself,” Young said. "That's what I have been trying to do the whole time I've been here."