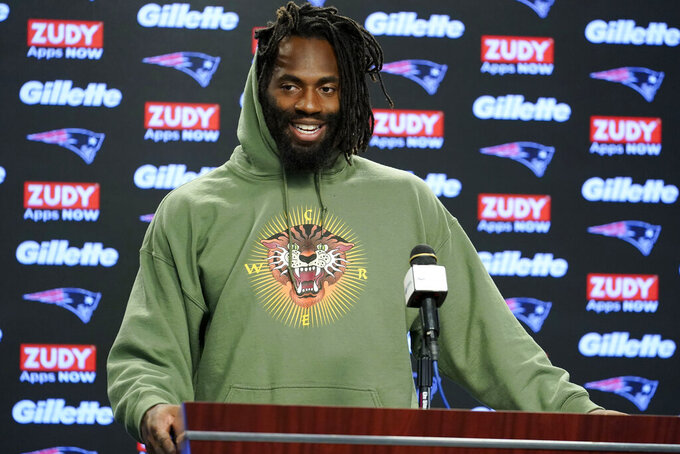 FOXBOROUGH, Mass. (AP) — When the Patriots have played well on defense in recent years, it usually has meant they’ve gotten good play at linebacker.

That has been the case again this season with linebacker Matt Judon, one of their key offseason additions, thriving in his first year in New England’s system.

He’s leading the team with 6 1/2 sacks and has brought a gregarious personality to the locker room that has fit right in with a group that includes veterans such as Dont’a Hightower, Kyle Van Noy and Jamie Collins, who was signed last week to begin his third stint with the team.

It has helped set the tone for a unit that enters the week ranked fifth in the NFL, allowing 317 yards and 18.4 points per game. The Patriots will need all of them to be at their best this week as they prepare to host a Dallas Cowboys offense that is ranked second in the NFL, averaging 439.6 yards per game.

New England will also be looking for a bit of redemption after giving up three touchdown passes and more than 300 yards passing to Houston rookie Davis Mills last week.

“If we’re gonna be a good football team, we’re gonna have to prove it,” Judon said. “Nobody’s gonna give it to us.”

The challenge against the Cowboys begins with trying to contain a quarterback in Dak Prescott who is dangerous both inside and outside the pocket, and is backed up by the dynamic running back duo of Ezekiel Elliott and Tony Pollard.

“The skill players, you can damn near put them up against anybody up in the league as far as talent or production overall, however you want to look at it,” Hightower said. “They’re talented on each level or each tier of their offense.”

Hightower, Van Noy and Collins all shared the field together in 2019, when the Patriots last beat the Cowboys 13-9 at Gillette Stadium. The trio led a group of linebackers which dubbed themselves “the boogeymen” as they combined for 19 sacks that season. They also ranked in the top four on the team in tackles.

After barely having a chance to dive back into the Patriots' playbook last week, Collins played just three snaps against the Texans but registered a sack.

He said there was an instant familiarity walking back into the Patriots locker room.

“It’s like going back home for the first time,” Collins said. “I couldn’t stop smiling. ... Just coming back in here and just knowing I can go out with these guys again for the third time. Three times, that’s big.”

After opting out in 2020 because of COVID-19 concerns, on paper at least, Hightower is having one of the slowest starts to a season in his career. He has 19 tackles, but has yet to have a sack through the first five games. It's just the second time in his nine years in the NFL he has failed to have a sack by this point in the season.

If his production has slipped, Hightower hasn’t noticed. And neither have his teammates.

“I’ve never been a numbers guy,” Hightower said. “I’m gonna do whatever I need to do for the team. Whether it’s knock the (crap) out of lineman, if I’m supposed to have eight or 10 tackles a game or have eight sacks — that’s what I plan on doing. I’m just gonna do my job. I’m a trash man. I just play football.”

That dirty work has included everything from setting picks to free up other players to making well-timed stunt calls. The willingness to fill those roles have been beneficial, Judon said.

“He does a lot of dirty jobs for us,” Judon said of Hightower. “But he makes it look good.”

While Judon believes this defense is taking steps toward figuring out how to be consistent, he said their identity will change week to week as they try to adapt and keep opponents guessing.

That will mean taking advantage of all their opportunities this rest of the season, beginning Sunday against Dallas.

“We've got to change our style every week,” Judon said. “But for us, our mentality, it stays the same. We want to play the upper end of football here and that never changes.”