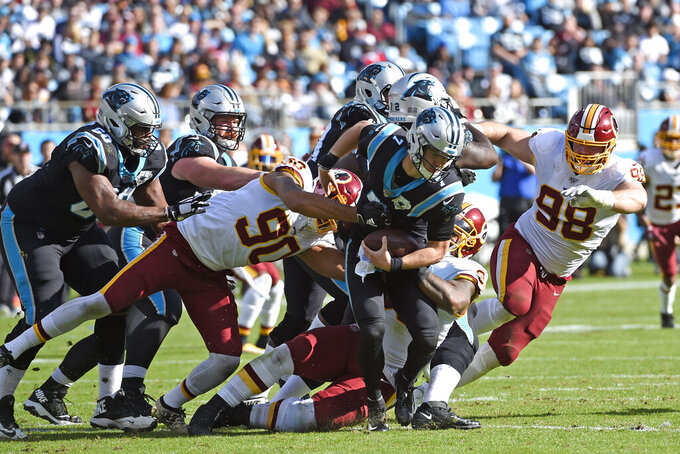 ASHBURN, Va. (AP) — Jonathan Allen turns on NFL Films and inspiration hits him with the force of one of his sacks.

Defensive linemen of the past making plays and harassing quarterbacks flash across the TV. Reggie White, Lawrence Taylor, “Mean” Joe Greene, Bruce Smith and Richard Dent all sport heavy helmets with the bar down the middle of the facemask, and Allen wants to look like them.

“I thought it was the coolest thing,” Allen said. “I was like, 'I'm going to try it out,' tried it out and loved it. That's my facemask for the rest of my career.”

The vintage facemask perfectly fits Allen, a throwback player who looks and acts as if he’s from a bygone era. At 24, he’s already the Washington Redskins’ most vocal leader, and his old-school style mixed with his bull-rushing abilities provide hope for the franchise’s future that he’ll be a difference-maker like the titans of yesteryear he’s trying to emulate.

“Jon is one of those extra-mile guys,” fellow defensive tackle Tim Settle said. “He goes the distance. He wants everybody to know that he's giving it his all and he's going lead us how he's supposed to lead us. He wants us to give it our all like he gives his all, and he wants us to play at our best ability.”

Allen is a vintage player on and off the field: He has 44 tackles and five sacks in his third pro season but believes sacks don’t tell the whole story. He also doesn’t think he’s doing anything special by strapping on a heavier helmet and speaking up in the locker room at such a tender age.

“My goal isn't to be throwback,” Allen said. “My goal's just to have my own personality and my own identity, and that's really just a guy who plays hard and plays the game the right way, the way it should be and just plays to win.”

Allen won a national title at Alabama, but at the NFL level, he's only been part of 13 victories in 32 games since the Redskins took him in the first round in 2017.

Washington is 3-9 this year in spite of Allen’s play. Many of his older teammates won’t be back next season, but Allen will, which makes him such an important voice as a pillar of the organization’s future.

Allen talks about leading by example, but it’s much more than that. He’s not afraid to speak up and is figuring out which players respond to different types of motivational tactics.

There's not really one way that you can get a whole team to respond,” Allen said. “It's always a learning process. You never get to the point where you fully know 100%, so I'm always learning and growing.”

That growth is on display each week by Allen putting together his own personal highlight reel that could one day land on NFL Films. Settle chuckles at the facemask while admiring Allen adopting it and setting the tone every day.